When the phone rings at 8 a.m. on a Sunday morning after the election, I immediately start thinking of what happened to my mother.  When I check the caller ID and see that the call is coming from her phone, I really worry.

But when I picked up the phone, my mother said "who is this?" (so I knew she was alive).  I said "Bev" and  she said "where are you?"  I told her I was at my house and that she had called me.

"I need help," she said.  I asked her what she needed help with and, after a pause, she said "With...this."  She then repeated what she has said to me every day for the past 3 years, that she doesn't know what she should be doing and she needs help figuring it out.

This is her biggest frustration and sometimes it is a mild annoyance, but sometimes it become a big cause of angst.  Today was an angst day.  I got in the car immediately and drove to Atria.  I picked up 2 cups of coffee in the lobby (because I hadn't had coffee yet) and went to the apartment.  She was in a familiar state of agitation though furniture had been moved and the house looked "messy" (for her) and she had obviously been trying to figure something out.

I sat and talked with her, the same conversation we always have.  She is supposed to be doing something, but she wasn't interested in anything I suggested she do (everything from picking up her newspapers and leaving them for the cleaning ladies, sweeping her patio, which bothers her because there are a couple of leaves on it, to going out to the front lobby to check on what activities were being done that day).  She met each suggestion with a blank stare and then asked wasn't there someone else in the family who could help her, since I was such a failure at it.

I started thinking of possibilities and the only workable one I could think of is for me to just essentially move to Atria.  Oh, not move in, but go there more than I have been going (it's been so nice having a few days off) with the idea that we are going to do something.

Monday, for example, there is bingo at 1:30.  I also noticed that my mother was out of lipstick.  I was going to make a note to go and get some for her, but decided that this was something she could do so I told her that tomorrow I would pick her up and take her to get lipstick, then we would have lunch and then go play Bingo.  Then we went to breakfast and by the time we had finished breakfast, she was her old self again.

It is obvious that she is not going to do a thing on her own and that the only way she will do anything is if she does it with me.  So, for the foreseeable future, I am going to become an active part of the life at Atria and hope that will help ease my mother's angst.

The Davis Dementia support group also meets this week (it's the 3rd Wednesday of the month and I keep having conflicting activities) and I will definitely go this week, barring unforeseen emergencies.  I definitely need support...and more importantly, ideas!

With all the angst at Atria, I was terribly afraid I would not be able to leave my mother to go to the Lamplighters Gala, the show we pay big bucks for and that we look forward to each year.  But she was so much better that I had no qualms about leaving her (who knows if she will remember anything, but at least she was OK when I left).

The Gala is starting to depress me.  It was always a ...gala... time meeting friends and enjoying the show, but as the years pass, more friends are no longer with us or have stopped coming to the shows, the rest of us are getting older and sicker, the people on stage are people to whom I feel no connection any more, and since I seem to have lost my taste for spirits these days, I don't even look forward to the champagne reception afterwards. 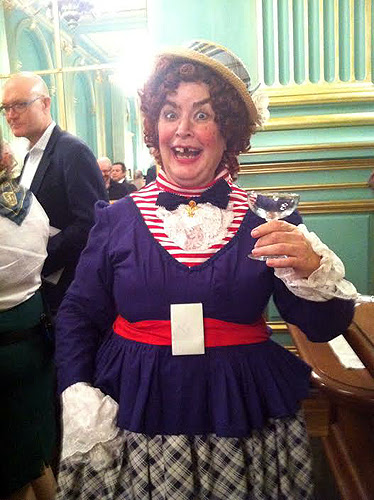 There were wonderful bits in the show, like our friend Barbara playing Laffing Sal, the British mechanical figure that stood in the window of the Fun House at Playland at the Beach, rocking back and forth and laughing continually, and terrified me .... well.... forever.

...this Sal was from The Fun House at ‘Playland At The Beach’ in San Francisco. Her bright red hair, huge towering moving figure and loud boisterous laugh are etched in the mind of every child who saw her as a child. Most were terrified of her – and many still remember that fear when they see her some 30, 40 or 50 years later.

Her interpretation was spot on, so much so that after the show, I was going upstairs to the reception and got in the elevator with Barbara and her husband and told her I wasn't sure I wanted to ride with her because of my memories of being terrified.

The show itself was not one of the better galas, though you can't really have a bad gala because there is too much talent, both in the writing and in the performing.

The story this time centered around a scandal in the U.S. Treasury and I think maybe money just isn't all that funny!  But the Treasury museum, which was a real tribute to Hamilton was wonderful, though probably more meaningful to those who are familiar with the Broadway hit. 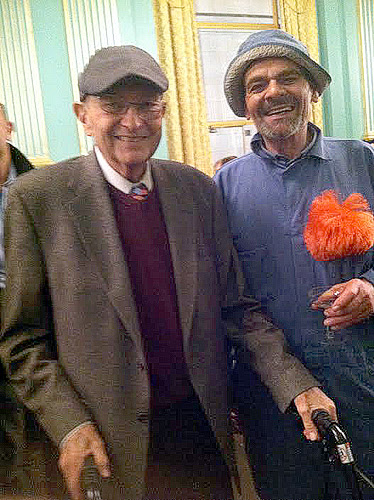 At intermission, former Lamplighters president (for 30 years!) John Vlahos was given a special "legend" award and many nice things were said -- and sung -- about him.  His wife had been doing her best to keep him from finding out about the surprise and she had been successful.  He was overwhelmed and it was such a touching moment, I was in tears from the emotion of it all.  I have had many connections with John over the years, and he's one of the good guys.

It was 9 p.m. before we got home, and the dogs were starving, but we had a good night, in spite of the rocky morning.  Tomorrow will be another adventure, I'm sure.
Posted by Bev Sykes at 1:14 AM

Email ThisBlogThis!Share to TwitterShare to FacebookShare to Pinterest
Labels: gala, Lamplighters, My Mother