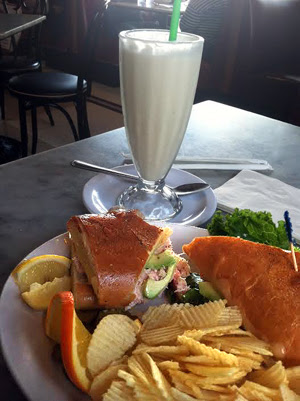 This was my lunch today.

It was a crab melt with avocado and fabulous and then Char and I both splurged and had milk shakes.  Mine was a vanilla malt.  My father taught me to love malt. When I was growing up there was a drug store a block from our house and the had a lunch counter where you could get milk shakes.  Those chocolate milk shakes were some of my best childhood memories.

But awhile ago I discovered NON-chocolate milk shakes and discovered I really like vanilla shakes, so I ordered one with malt.

Now I rarely order shakes and even more rarely order malts but I am almost always disappointed that sometimes you pay more for adding malt to your ice cream and seldom can you taste the malt.  But Fenton's is a premier ice creamery and my shake was deliciously vanilla-y and even more malt-y.  I loved it.

Fenton's used to be a popular ice cream store in Oakland when we were raising our kids there.  We didn't go often but enough to have fond memories.

Many years ago Fenton's opened up what I think is just their second location, 30 minutes from our house.  When Char and I have lunch, she usually drives up to meet me there, though it is by NO MEANS halfway between our two houses.  But I think she enjoys an excuse to eat at Fenton's like I do.  We usually get something with crab in it and this crab melt was a new item on the menu and became an instant favorite.

Fentons was built on the site of the famous old Nut Tree grounds.

When I was a kid, it was a fun place to stop, even if only to look around.  There was a restaurant, a shop that sold jewelry and scarves and "stuff," and had a big section on aviation, books and more "stuff."

There was a nice bakery that always had huge decorated cookies. 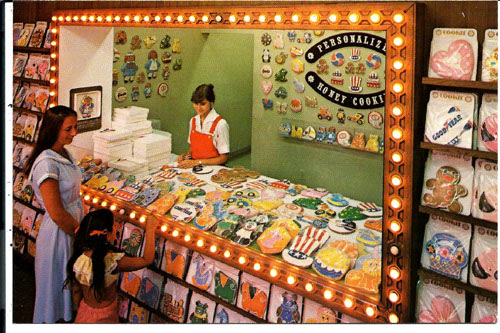 There was also a separate building that was the toy store, a mini railroad that ran around all the property, a big merry-go-round, and oversized rocking horses that sat outside the entrance to the restaurant. 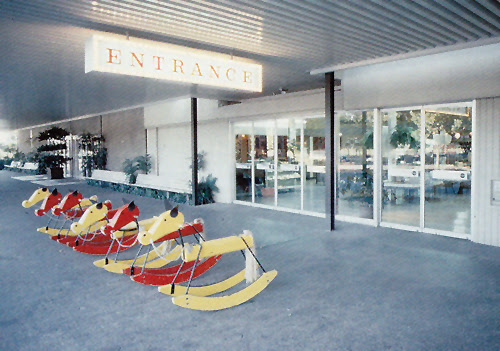 There was also an airport.  Yes, a real airport.  The place was so well known that sometimes folks would hop into their planes in Southern California, fly up for lunch and then home again.

The place had humble beginnings.  In 1921 the Power Family set up a roadside nut tree stand in the shade of an old oak tree in Vacaville, conveniently located along I-80 and a nice place for a stop between San Francisco and Sacramento.  And it just grew like Topsy.  It seemed everyone stopped at the Nut Tree.  (It was a favorite stop of one of my uncles and one of his wives and caused a bloody argument every time because she always spent so much money in the shops)

When our kids were little, Walt and I took one kid out for dinner a month.  One month Walt took a kid, the next month I took a kid.  They got to pick wherever they wanted to eat.  It just had to be a "sit down" restaurant.  In the early years, The Nut Tree was always a favorite choice.  The restaurant had a huge aviary with lots of birds to watch. 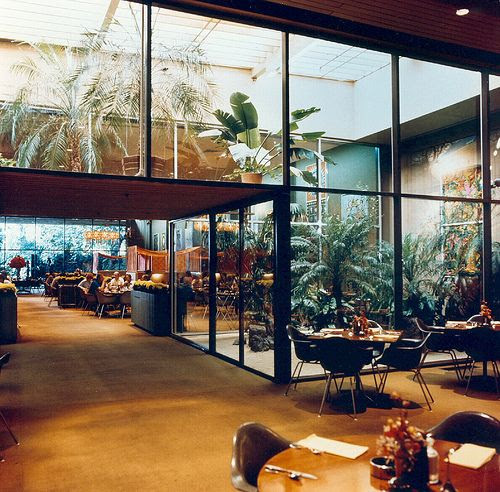 Everyone got their own home made loaf of banana bread served on a tiny bread board to hold you until your meal came. There was a pineapple salad with some sort of marshmallow dressing that was delicious.  At the end of the meal there were all those fun things to look at and try to resist buying, or something to pick up at the bakery to bring home.

The original Nut Tree shut down in 1996.  One day it was there, the next it was gone, though they never took own the iconic sign. 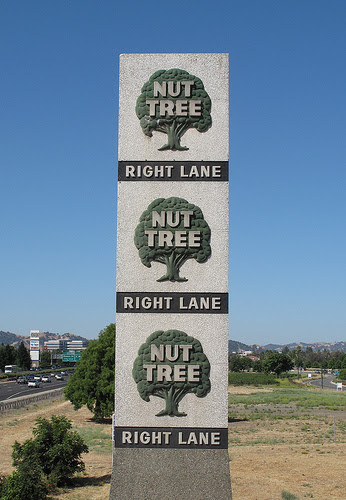 Eventually stores began popping up on the site of the old Nut Tree, and now it is a thriving mall.  At first it was just a disappointing number of the usual shops, but as it began to fill up, they returned a lot of the feel of the old place, only different.

It was the perfect place for Fenton's to build a new restaurant, which is right next to the shop for JellyBelly stuff.

There is now a museum in the town of Vacaville with over 7,000 artifacts from the original Nut Tree.
Posted by Bev Sykes at 12:42 AM

I love this. Thank you so much for the nostalgia. I used to visit the Nut Tree as a little girl on trips between Chico and the Bay Area. I honestly thought the Nut Tree would always be there. I'm still in shock that it's gone.