How was YOUR Saturday?

It was not how I'd planned to spend my Saturday afternoon.

But then, to be fair, it wasn't how my mother planned to spend her Saturday afternoon either.

I had a call from Atria at noon.  She was having another of her passing out spells.  Should they call the paramedics, or did I want to come over.  Since it seems an exercise in futility to take her to the ER, we decided we'd start with me coming over.  She was passed out, looking for all the world like she was dead, but she was breathing and her eyelids were fluttering...never open, but fluttering, kind of like REM sleep.

I called her, talked to her, rubbed her arms and feet, held her hand (at one point her fingers kind of closed around my hand, thought she didn't squeeze) but I was no more successful at waking her than the aids were.

So they had to call the paramedics, and if the paramedics are called, they have to take her to the emergency room. She was probably out a total of 45 minutes and the paramedics say that she started coming to when they were taking her out of the ambulance.  (You know she's back when she flirts with all the men around her -- paramedics, doctors, and nurses!)

Same place, different time, another three hours, another round of tests, more results of all within normal limits.  It's so frustrating that they run every test in the book that they can do in the ER and they all come back normal.

The doctor said the only change from last time was that her heart rate was slightly, but not alarmingly, lower than last time and he thought maybe one of her cardiac meds was not working well for her and should be changed.  He also said if it was a cardiac problem, maybe we should consider a pace maker, but my god does anyone even think about such a procedure on a 97 year old??? 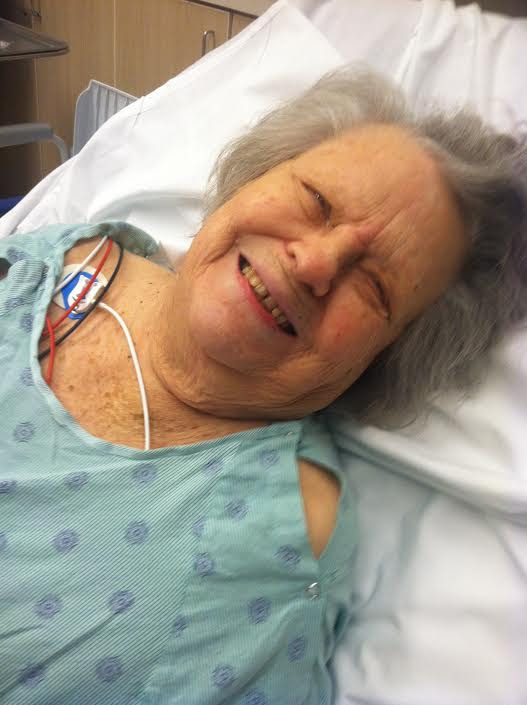 While we were waiting, I snapped this picture to send to all the family to let them know she was fine...or as fine as she could be, given that she had passed out just a couple of hours before.

After all the tests had been done and evaluated, the doctor again said that everything was normal and he didn't know what caused her to pass out and that she should see her regular doctor on Monday, so I have now made an appointment for her to see her doctor Monday afternoon.  I'm hoping to get a referral for a full neurological workup, which the last ER doctor recommended three weeks ago.

Dr. Patrick also gave me a form with a change of orders to drop the cardiac med, awaiting a different type of med from her regular doctor.  I was to deliver that to the med techs at Atria.

If I had $1 for every time she asked me where she was, how she got there and why was she there Walt and I could go to a first class restaurant for dinner tonight.  Poor dear.  I know she's scared, confused and has no memory but I should have recorded "You fainted.  Nobody could wake you up.  They called the paramedics, they loaded you onto a gurney and into an ambulance and brought you here to the emergency room.  They are trying to find out why you fainted."  But a minute or two later she would look around and say she didn't know where she was and what was she doing there?  Do you know how many times you can ask that question in three hours?  Next time I'll have to keep track.
Finally I had my packet of "at home instructions" and I went and got the car.  They wheeled her out in a wheelchair and got her in the car.  It was raining pretty steadily by now.

We got to Atria and I drove to the front door, under the overhang and got her out of the car so she would not have to walk in puddles in her hospital-supplied socks and told her to walk inside the door and sit and wait for me.  Thank my parking angel, there was a space in the Atria parking lot, so I didn't have to walk a block in the rain.

I gave the doctor's orders to Brianna, who is in charge of my mother's care, and took her off to the dining room to get some food in her.  It was now 3 p.m. and she had not eaten all day.  They were all set up for dinner, but scrambled us some eggs and toasted some toast and my mother finished everything.  Then I took her back to her room and left her, saying I'd be by the next day to check on her.  The aids put her on a 2 hour check to make sure she was OK the rest of the afternoon.

Then I went back to Brianna.  She could not accept the doctor's orders.  Though they were on official Sutter Davis forms, he didn't sign his name and without his signature, they could not follow his instructions.  So back to Sutter -- it was now raining harder, of course -- the doctor was as exasperated as I was, but signed the damn form and I took it back

I asked the doctor if we could get frequent flyer miles.  He laughed and said at least I had a good sense of humor about it all.  I asked him what choice I had!

So Brianna has now accepted the doctor's instructions and presumably the possibly offending medication was dropped when they gave her her meds this morning.  And tomorrow we'll go to Kaiser, where I will answer a bazillion times where she was and what she was doing there and remind her that she had fainted yesterday. (I love it when she asks "why didn't I know that?"  Because you were OUT! I tell her)
I came home and was just ... depressed.  I was depressed because they can't do anything to help her unless they can figure out what is wrong, and depressed because there was a point while I was trying to wake her up, when I hoped that she would just take a last breath and join all those folks I was sure were standing around her bed waiting for her.  That made me feel like a terrible person....but what did she need to wake up for?  And how lovely it would be to just fall asleep..forever.

Her new thing is asking if there isn't someone else in the family who could help her, since I can't.  But the people she wants to help her are all dead.  She's stuck with inadequate me.

I couldn't really eat last night, but did manage to choke down a piece of the new pumpkin pie I had made using the leftover pie dough and pumpkin filling.  I made "new leftovers."

So then.... I thought I had finished this entry until I got another call from Atria saying she was upset again and they couldn't calm her down.  I went over there and this was a whole new wrinkle!  Usually she's upset because she doesn't know where she is or what she is supposed to be doing.  This time she was upset because nobody likes her there, everybdy talks about her and points to her and she doesn't know what she has done wrong, and she wants me to put her someplace in a room by herself.  I knew paranoia was part of the dementia cycle, but she had not displayed it before.

We talked a long time.  I pull no punches with her.  I tell her there is a disease eating her brain and that it is incurable.  I remind her that her mother and sister both had it too, so it's not unusual.  (I think that always helps)  She wants to know what we can do to fix it and was relieved to hear that she will see the doctor tomorrow because she's sure the doctor will know what to do (fat chance).  She moved from that to wasn't there something she could do to help other people like herself and I told her I'd see if we could work something out.  By the time her aid, Harbans, came in to check on her, she was laughing and we had a nice visit with the aid (who, I found out, is from Fiji).  She says she loves my mother and my mother says she is her best friend.

After Harbans left, she seemed to be in good spirits so I told her I was going to go home.  "Are you feeling better?" I asked her.  "Why?  Was I not feeling well?" she said.  I told her I would see her tomorrow to take her to the doctor and she got indignant and said "Did anybody ask ME about this?"  So she was back from Paranoia-land and just in the same ol' Land of Dementia once again.