Today we finally had another Big Meeting at Atria, to go over a few points, get a progress update, and tour the memory facility.  Walt and Ned came with me.  It's always comforting to have reinforcements!

The first item was the large statue broken by the workmen during the recent lengthy renovation.  I told them it had no special significance and if there were any sentimental value, my mother no longer remembered it  I would like it thrown out, but just wanted it to be known that I was very upset about how it was handled (or not handled).

The General Manager wants to replace it.  God no!  We definitely don't need that, but he wants to do something for us, so I suggested he let us all come for Christmas dinner the day or two after Christmas, as Tom et al. will be here.  If Jeri and Phil come it could be as many as 12 people for dinner and he readily agreed.  So we're all good about the broken statue.

They tell me that she has been off the narcotic she was taking for pain for several weeks now, which I'm thrilled about, since she is still having some pain, but nothing like it was for so long.  She's not in agony any more.

They also think she's not ready for the memory unit but that there may be a day when she is.  I asked for a tour.

I'm not sure what I was expecting.  Maybe something like the convalescent hospital Walt's mother was in before she died where all she had was a bed and a TV and two roommates.  My mother would hate that.

But I was pleasantly surprised.  I expected it to be depressing, but it was not at all. The first thing I noticed about the place was how bright and airy it was.  The community areas are open and inviting (unlike where she is now) and right next to the dining room, so it seems more conducive to social interaction. 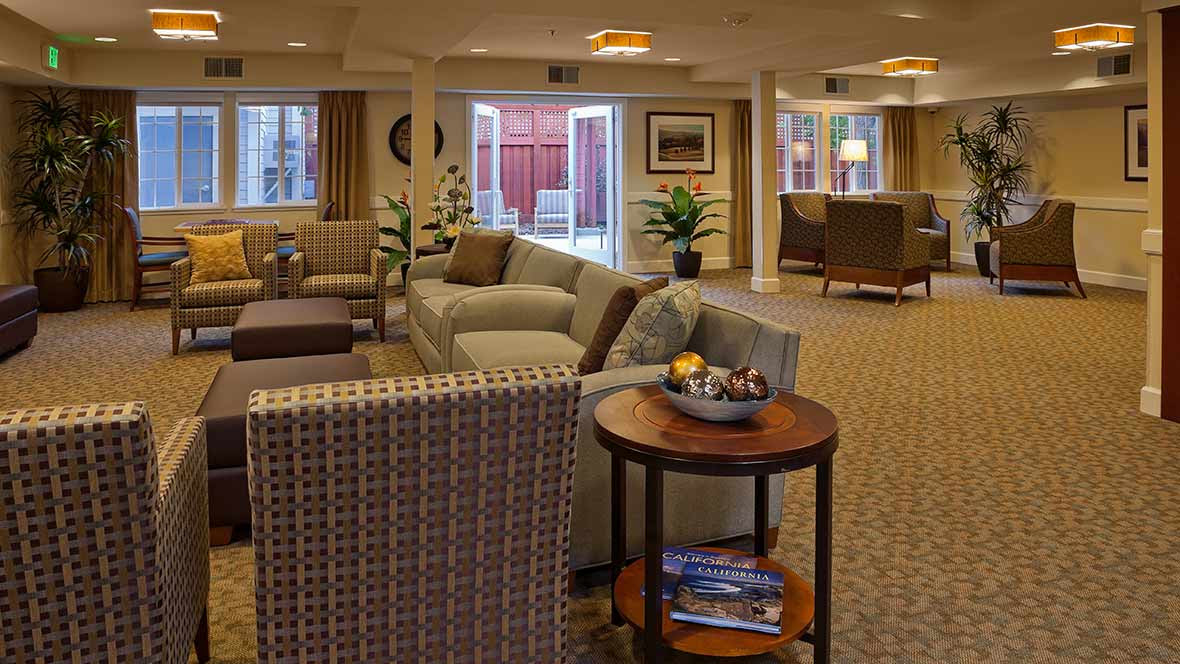 It is set up so if someone wants to "wander" they can go outside and the path they follow takes them back inside again.  They can't get out of the locked facility. 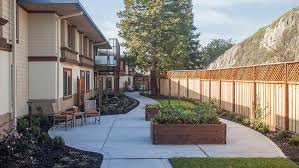 (I found these two photos on the internet. They are Atria facilities, but not the Davis facility, but look very similar.)

Residents live in 2-person "suites," which means a shared bathroom in the middle and bedrooms on either side, but otherwise privacy, and room is significantly larger than I expected.  I could see my mother doing well there.  Moving her out of her apartment would necessitate getting rid of lots of the "crap" that bothers her so much (mostly photos) and she could start all over in a pristine environment.

But not yet.  She isn't at that stage yet, they tell me, though they do see her needing to move eventually. A big factor is the cost, which is significantly more than she is paying now.  If we knew how many more rent payments she was going to have to pay in her life, it would be easier to decide what she can afford, but we don't know that.  When she moved in there, I think the rent for the memory unit was something like $6,000 a month and there have been 3 rent raises since then, so lord knows what they pay now.  Her stepson figured, 3 years ago, that she could afford to live at Atria until she was 103.  But if she moves into the memory unit, obviously we'd have to knock her off before that.

After our tour, we went to visit my mother, who was sound asleep at 1:30.  We woke her up and she came to quickly when she knew Ned was there.  He's so good for her and with her!

When we finally left Atria, I went off to the store to buy fixings for Thanksgiving dinner. My heart is only partially in it, since it will be only my mother, Walt and me.  Ned and Marta are spending the dinner with Marta's family, who have invited us to join them, but whether she cares or not, knows what's going on or not, it's important to me to spend these last holidays with my mother.  And she definitely does not do crowds of people she knows, much less a house full of strangers.

For the last several years, we get to this part of the year and I just want it to be January.  The holidays were always such a HUGE family time for most of my life and it kills me that we are so separated and that there are only three of us to "celebrate" this week.
Posted by Bev Sykes at 3:56 AM

Email ThisBlogThis!Share to TwitterShare to FacebookShare to Pinterest
Labels: Atria, My Mother, thanksgiving

Glad that your survey of the Memory Unit was a positive one (other than the cost, of course).