You'd think someone who has cooked as many turkey dinners as I have over the years (both Thanksgiving and Christmas for as many as 24 people) would have no qualms about cooking a turkey dinner for three people, but I woke up at 6 to get potatoes into the slow cooker (new recipe) and then sat here checking and rechecking recipes for the three other dishes for the meal -- turkey, stuffing, and Brussels sprouts.

I decided I'd do a cheesecloth wrapped turkey (how can you go wrong with a turkey wrapped in melted butter soaked cheesecloth?) and instead of stuffing the bird, do a dressing, where I just cook it in the oven.  I had bookmarked all three recipes (Brussels sprouts, which I have only cooked once before, with pomegranate seeds) but then my computer rebooted itself and I lost the recipes.

So I spent a good deal of time searching the internet for the recipes I had decided on.  I got them all printed, but even at that I would be changing them as I cooked.  I had decided on a dressing (i.e., not cooked in the bird) with sage sausage -- I never have used sausage before.  My mother always used turkey innards to flavor the stuffing, but I've never done that, so this would be an experiment.  I also discovered  that I had no onions.  I ALWAYS have onions.  I didn't want to go to the store (if I could find one open), and decided I'd be nice to Walt (who hates onions) for once and cook without an onion.  There would be chopped apple and celery and then dried cranberries and toasted almonds (not in the recipe, but something my mother always used).

Around 11 Ned and Marta stopped by on their way to Marta's parents' house for dinner  We had a nice visit and then they went over to visit Grandma.  About half an hour or so later, it was time to get my mother, but I was at a point where I couldn't leave the kitchen, so I sent Walt.  He told me later that Ned was a gem.  My mother had decided she didn't feel like coming, but Ned is not to be denied.  He told her what a good time she would have got a coat and put it on her, and then guided her out to the car.  I didn't know any of that until after we had taken her home again.  She was, of course, confused about where she was and asked me many times if this was my house.

Walt made her a vodka tonic, her first in a very long time (she used to have one every night). 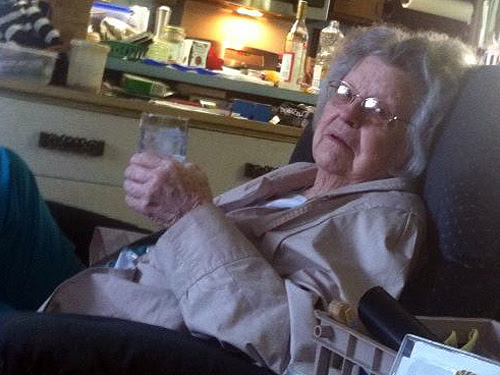 I sat there and said to her "You know how you're always telling me you want to get rid of all the crap in your house?"  She nodded affirmation.  Then I said "Well...look at this" and indicated the crap around the chair where she was sitting. 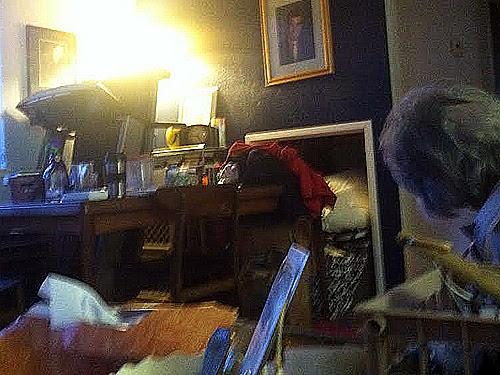 She told me that obviously she had not done a good job teaching me how to clean house.  We laughed.  She also tried making friends with the dogs.  Lizzie loved it, Polly was having none of it and stood in the hall barking. 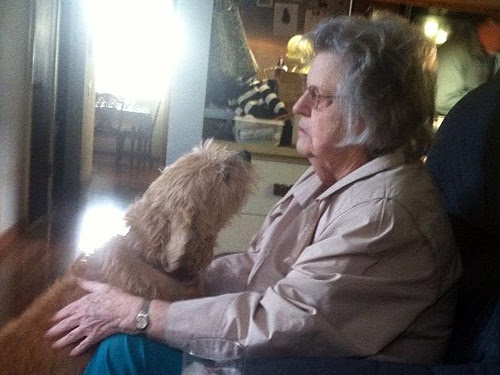 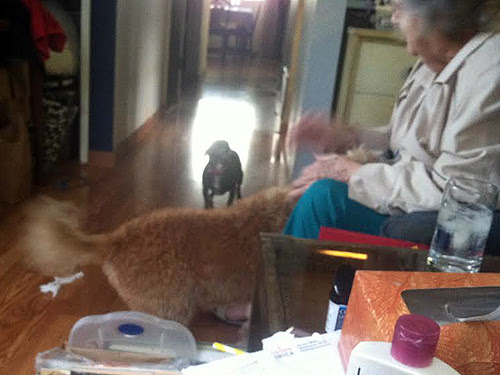 She helped me carry dishes to the table, but instead of coming back to get another dish, she took her own dish and started filling her plate, and in the process knocked over my wine glass.  I don't think she even realized she had broken it. I kicked myself for putting out my godmother's good crystal (which I acquired when my mother moved to Atria) because I loved the glasses and now only have 3 left.  But that was my fault, not hers.

Everything  turned out fine, though there was too much, which, of course, was the whole point of cooking myself--leftovers!.  I also was disappointed that I had chosen dressing instead of stuffing and next time will stuff the turkey again.  Dressing is too dry and crispy.  Stuffing is wet and soggy and perfect when added to the dressing that doesn't fit in the turkey to make the perfect combination.
I was also a little disappointed in the Brussels sprouts.  They were good, but not as good as I had hoped.

But she ate it all and had a piece of pie...and two glasses of wine.  While Walt and I cleared the table, she finally made friends with Polly.  Sort of. 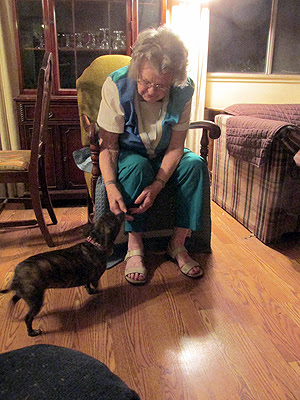 She was really tired when we took her home and was probably going to go right to sleep...I would too, if I'd had a vodka tonic and 2 glasses of wine!

It was really a nice Thanksgiving.  And after we got home from Atria, we had calls from Jeri and from Tom (and the girls) so we had touched bases with everyone and feel very thankful for a day well spent.

Now I go to sleep, dreaming about the pumpkin pie I'm going to have for breakfast in the morning, and the turkey sandwich I'll have for lunch.
Posted by Bev Sykes at 12:00 AM

Email ThisBlogThis!Share to TwitterShare to FacebookShare to Pinterest
Labels: thanksgiving

I cooked only 4 things this year also, a Kosher chicken small-ish), not stuffed either, and mashed potatoes, and butternut squash, and stuffing made outside the bird cooked in the oven also. The other day I went for an onion and was OUT of them, also! I am NEVER out of onions! I use them almost every single day in cooking... and the last coincidence... my hub also doesn't love onions either, so I cooked him a few meals without onions, going against my onion-lovin'-grain. All in all it was a quiet peaceful day for us and our collie dog, Belle, got some yummy chickie-meats as a special treat!

Hope all is well