Lemme tell you...I'm afraid to step outside my house ever, ever again. Just as kind of a preliminary note: The washing machine is not working, when I tried to lock Alice Nan's door, her key wouldn't work for me. When we got home, the computer wouldn't start, the fan that I keep here in my office to keep me cool wouldn't start, and the tap on the water cooler wouldn't release any water. I was wondering if I was standing under some black cloud or something.

I finally managed, after many, many tries to get the computer to start (but I just know it's on its last legs). The fan did finally start cooling me off. The water cooler worked just fine for Walt (and eventually for me). But I'm starting to wonder what else around here I can "break."

The morning started early. We showed up at Tom and Laurel's at 8 a.m. Laurel was finishing feeding Lacie and then took Bri to school, while I got in a lot of cuddle time. 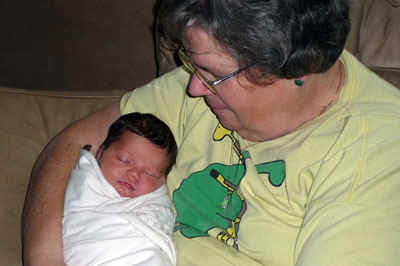 I don't know when I will see her again, but it's fair to say that she will have changed a lot the next time I do see her.

After Laurel came back from dropping Bri off, the rest of us went to a restaurant for breakfast. They had a cleaning woman working in the house and figured it would just be easier on everybody to get out of her way and to take Lacie out for breakfast. Lacie didn't eat much (and was pretty much dead to the world the whole time), but the rest of us had a great meal at some place called International Catering (highly recommended!) 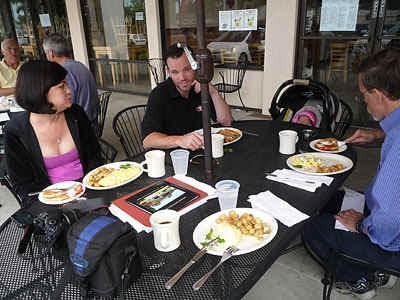 We said our goodbyes in the parking lot and headed back to Alice Nan's to pack up and get on the road home. It had been a very short (and for Walt, expensive!) visit, but we had such a great time. I loved the time I got to spend with Brianna, and, of course, baby cuddle time is almost as good as a big plate of fresh Dungeness crab!

I had chosen a shorter than usual book for our drive home, "Darkly Dreaming Dexter" by Jeff Lindsay, the first book in the series the character in the popular Showtime series Dexter is based. I thought it would just about fill the drive time. I don't think Walt and I said two words to each other all the way home. When we got here, there was still an hour left to go of the recording, so we sat here with the TV off and just listened to the rest of the book! Now I'm curious to check out the TV series, bloody though it is!

The drive home was uneventful but I took some photos which I may or may not use to send to the Compassion kids to show what this part of California looks like. This being harvest time, the fields all up and down the valley are filled with migrant workers harvesting many different kinds of produce. 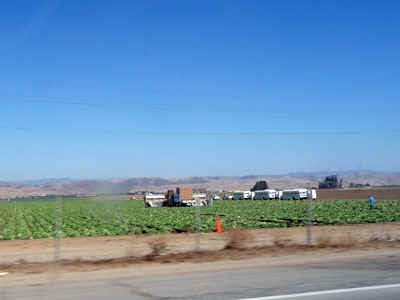 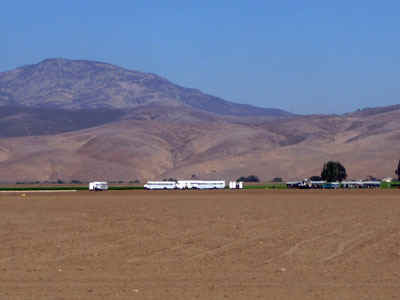 I got a good photo of this spot of the road. Every time we drive through this grove of eucalyptus trees, I am reminded that a scene from the movie Vertigo was filmed here. 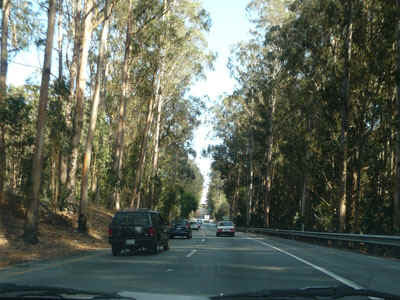 And finally I had to record the bumper to bumper traffic that we encountered going through San Jose and Walnut creek...and most of the road in between!!! 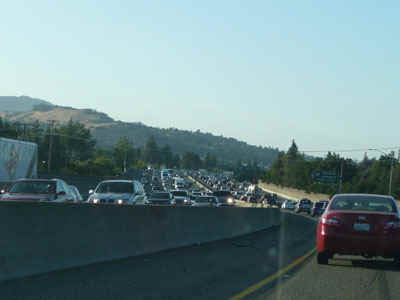 Tomorrow is Walt's ALS walk. I asked how many are on his team and learned that he is the only person walking for Bill Cunningham. Thank you to everyone who contributed. He managed to raise more than half the goal set for this "team."
Posted by Bev Sykes at 12:02 AM

Im so glad you and walt made it home safely and good luck to Walt on Saturday on the walk and good weather is wished for you . It is really cool here this am .