I went to the bathroom this morning to take a shower and discovered we had NO toiletries except a bar of soap. I had no shampoo with me, so I didn't wash my hair. Later, after talking to Char and finding that THEY had shampoo, I called down to guest services (on the only one of our two phones that work) and they brought up toiletries. But of course it was too late for me. I'll wash my hair tomorrow.

Lemme tell you, I'm not staying at a Hilton again! Gimme those cheap hotels with free wifi, toiletries you don't have to ask for, working telephones, working a/c (ours didn't come on until this morning) and more than three tiny drawers for your use. 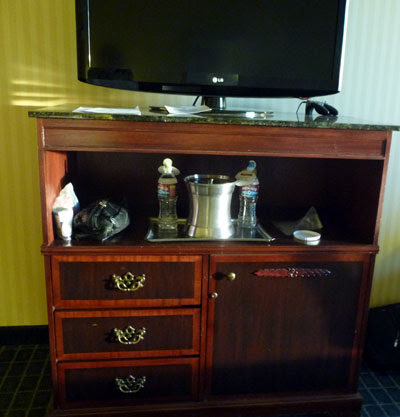 (the cupboard on the right is locked, so you can't use it).

At least I have no complaints about the view! 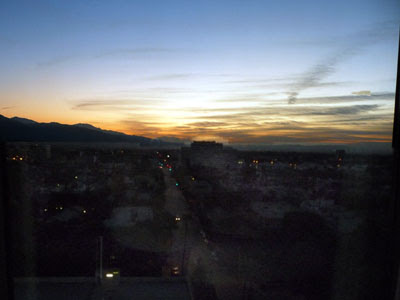 We had breakfast here in the hotel, where coffee is $4.50 and where we waited nearly 30 minutes before our meal was served. Ironically, at about 20 minutes, the waiter came to ask if everything was all right...we told him everything was fine--except the fact that we still hadn't received our food.

We hung around our room for an hour or so and then met Mike and Char in the lobby and drove to La Canada/Flintridge, where we were meeting Mike & Char's youngest, Cam, his wife Evelyn, and her parents at a great restaurant called "Dish." The in-laws (Steve and Chris, who is actually the step-mom) were just great and since they had taken both of the Viking cruises that we had, it was fun to compare stories.

Midway through his hamburger, Walt suddenly looked ashen and confessed that he did not have our game tickets. They were in the suitcase back at the hotel. He took Mike & Char's car and headed back to Pasadena. We sat and waited. and waited. and waited. Finally about 45 minutes later he was back, tickets in hand and all was well. 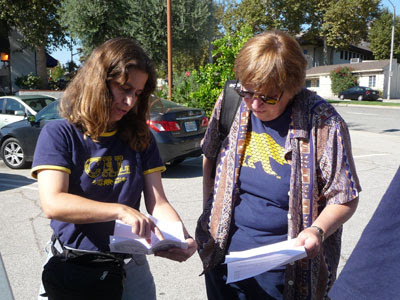 Char and Evelyn conferred on directions to find the Rose Bowl and we were off. 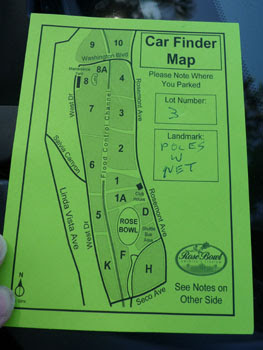 The "parking lot" is the Rose Bowl golf course and it is filled with cars.

Cleverly, they give you these little "car finder maps" where you can enter your area number and write down "landmarks."

We looked around for landmarks and saw "trees and poles with netting." Mike marked "Poles with net" on the card.

Then we discovered that the entire golf course was lined by "poles with netting" on them. But there didn't seem to be any other landmarks.

But then we noticed a balloon floating high in the sky, anchored to some sort of machine on the ground and we hoped that we would be able to see it after the game was over and the sun had gone down.

Our car finally parked and feeling hopeful for the game to come, which the Bears were favored to win, we headed off in the direction of the stadium. I looked at Char, Walt and Mike walking away and couldn't resist singing a verse of "Follow the yellow brick road" in my mind! 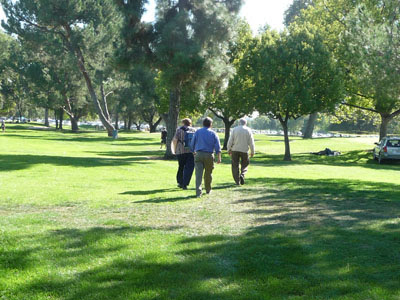 We were supposed to meet a friend of Cam and Evelyn's--all 3 had played in the Cal band together, many years ago--and he was going to take us to his tail gate party.

It was very hot, but we found a shade tree to wait under. Sort of. 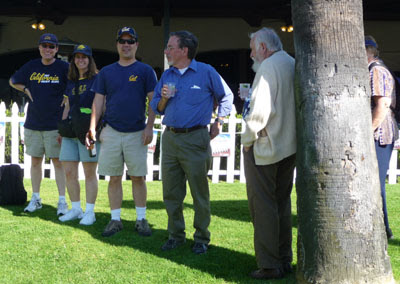 Randy did, indeed, take us to his tail gate party, which seemed very nice, but I hate things like that because though there were lots of canvas chairs, I am always afraid I will break one because of my weight, and I can't sit on the ground because it's so horrible to try to get up, especially in front of a lot of strangers. Standing for long periods is difficult for me too, so I rested against a car, which probably made me seem very stand-offish, but I had no choice. I finally decided that rather than stand by myself off to the side, to go into the stadium while the others partied. At least I could sit.

It was kind of cool to go through the tunnel and to emerge in the... 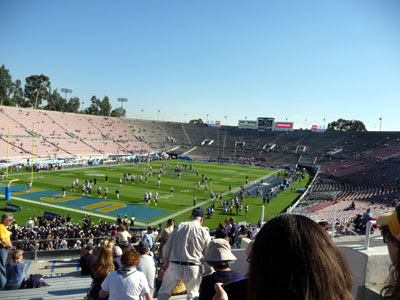 The stadium would eventually be pretty full, with only the end zones having big blank areas. 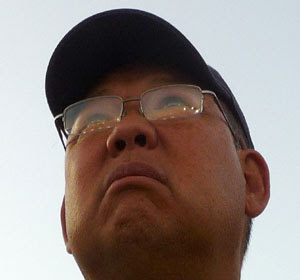 I had the misfortune to be sitting in front of this guy, who apparently thought his $45 bought him not only his seat, but half of mine as well. I had his knees in my back and his feet either under my butt of on either side of it through most of the game.

He also "coached" the entire game. He did not shut up for one minute, telling the team what they should do, commenting on plays, talking about specific players. He was very loud and extremely annoying, but we were too polite to tell him to shut up and move his damn knees.

The game started great, with a Cal touchdown and we were very hopeful. However, the scoreboard was not kind to us by half time. 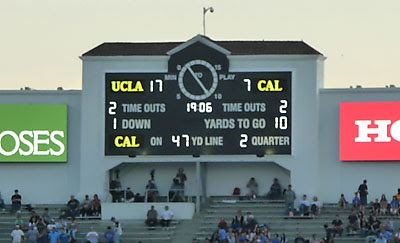 It was even less kind at the end of the game, when it read 31-17. My record of bringing bad luck to the Bears by actually attending a game remains intact. But despite everything, it was a fun afternoon and I'm glad we came.

We came back to the hotel and to the lobby bar, where we had some "sticky ribs" and beer for dinner and then staggered upstairs, where I plopped on the bed and was sound asleep in minutes. I figured I would get this entry written when I woke up, inevitably, at 1 a.m. And I have now done it and will see if my back will let me sleep a little longer.

It will be nice to escape the traffic of this place and hit the vast emptiness of I-5 and get home in time to feed the dogs. 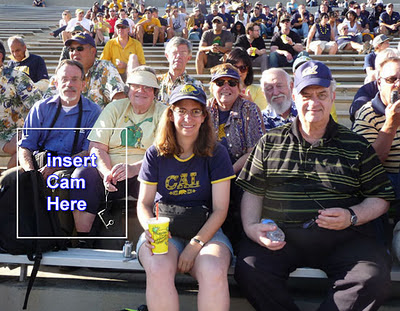 Yes it is nice to get away but it is always great to get home as well.