Back on the Freeway Again

We had such a good time this morning/early afternoon. Actually, in the morning I got a load of laundry washed so I have blue and sortagold to wear to the Cal/UCLA game tomorrow.

At 1 p.m. we met our friends D and G for lunch. We see each other rarely and it's always quickly, like this, but always fun. But we are learning that when we get together with people our age, it's always predictable as we hold the usual "organ recital" (whose organs are infected, affected, or failing), which friends are now dead or dying or have slipped into that neverland called Alzheimers. And, as our parents die off, we have a new subject: how complicated was settling the estate.

We thought Walt had encountered some glitches with their mother's simple estate, but D wins this one, with his parent's estate tied up in family landholdings in another country, going back several generations, that could potentially be very valuable, or worthless, and involving not only the children in the family, but also charitable institutions which have to be included in the distribution...and added to that a trust that eliminated the need for probate here, but a foreign country which won't try to settle the distribution until the estate has gone through probate.

D's mother has been dead about 10 years, and he figures that his infant grandson will still be working with the attorneys long after D himself is gone!

After lunch we got on the freeway headed for Pasadena. At first things were going well but eventually we hit stop and go traffic. 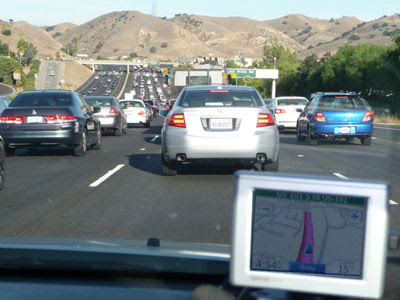 It was like the 405 all over again and I watched the GPS listing when we were to make our next shift go from 16 mi to 14 mi in about 20 minutes. All this time Char and I were sending about a bazillion texts back and forth. She and Mike were in the hotel in Pasadena, and we were trying to get there.

When I saw the first sign (still miles away) that Pasadena was approaching, I typed:

"Look! Pasadena is closer and prettier than ever! Oops. Some poppies here."

Me: The Witch's Dorothy?

Char: try clicking your heels together.

There were lots and lots of other messages but those Oz-related ones were fun.

As we approached and were to get off on Los Robles, Nigel, our British speaking GPS voice, told us to get off on something that sounded like "Lowe's Rubbles." I love how this British voice mangles Spanish words.

But we are at the Pasadena Hilton on the 14th floor with a sweeping view of Pasadena. And, as this is the Hilton, where the rooms, if we were not here on a special very low Cal rate, are $400 a night, nothing is free, so I am paying $10 a day for internet access that I got free at the Holiday Inn a few miles from here on Friday night. I don't like this being part of the 1%!!

Char helped me get the luggage upstairs while Walt took the car to the parking lot (I didn't ask if parking was free or not) and we talked about settling her mother's estate.

I guess is the way it's going to be from now until death--talking with peers about illness, death, funerals and estates. There have been five deaths of people we knew well this year. I'm sure it's only going to get worse.

While waiting to die, Mike, Char, Walt and I walked to a nearby mall where we found a nice restaurant with outside dining and huge TV monitors so we could watch the end of the World Series. It also boasted "the world's largest collection of draft beers" and we had to take advantage of that. Char couldn't resist ordering "moose drool" and knowing that I preferred something light, I looked at light lagers and chose according the the name: Boddington's Palamino" (because I love horses). Fortunately, it was very good. 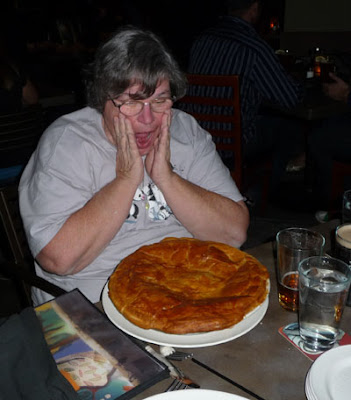 This was the turkey pot pie I ordered. It was HUGE. I didn't finish it!!

Now it's pushing 11 p.m. and I am stuffed full of food, and very sleepy, so I'm going to see if I can sleep a couple hours before my back wakes me up.

Tomorrow we go to the Rose Bowl...well the stadium, if not the game (though we are staying one block from where the Rose Parade will pass in January).
Posted by Bev Sykes at 12:02 AM

Email ThisBlogThis!Share to TwitterShare to FacebookShare to Pinterest
Labels: Pasadena

Oh my goodness what pot pie that was . That beer looks delish . Well Im not looking forward to the lung doctor's visit on Monday since he is the one that makes the determining factor as to continue the home oxygen therapy or not . I just think there might be some underlying cause of why my lungs presented on scan as ground glass looking . Oh well we get handed what we get handed and then we deal with it right ?

We deal with it -- indeed! Are you sure you don't want to start a private ring somewhere for us seniors? (Not that I'm joining, you understand.)

Thank you for linking up with the Getting to Know You Friday Blog Hop! New follower!

Your writing is hysterical and had me in stitches. It's been a long time since I laughed so much. I'm very much looking forward to reading more of your blog!