My mother was raised on a ranch so I'm not sure when she learned how to set a proper formal table, but as I grew up, I knew how a table should be set. 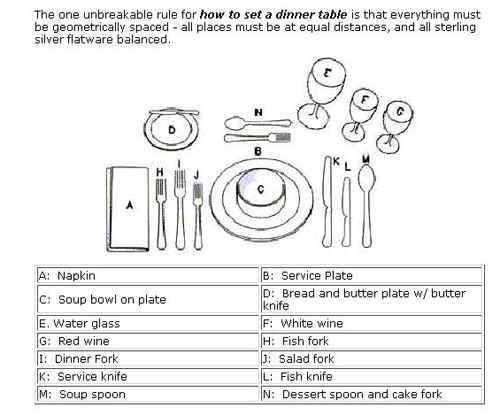 We didn't necessarily have enough courses to require all of these pieces -- I don't think I have ever attended a dinner which include soup AND fish AND salad AND main dish, both red and white wine, and both cake and "dessert," but I always knew that even a breakfast table needed to be set properly. 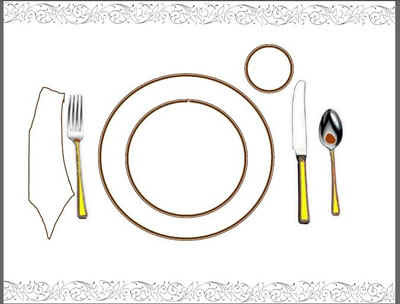 Fork on the left, often accompanied by a salad fork, both either next to or on top of a napkin, knife and spoon (sometimes accompanied by a soup spoon) on the right. Plate in the middle, glass at the top right and, if there is to be one, salad or bread plate at the top left.

I don't know when I learned that. And I don't know that I taught that to my children (did I, kids?). But I am constantly surprised by how many people do not know how to set a table properly any more. Maybe it comes from having restaurants wrap their service in napkins and present them in one lump on top of the plate (or maybe I go to the wrong restaurants!)

I think of the times I've gone to my mother's with a group and had someone set the table, knife on the left, fork on the right, napkin in the middle of the plate. It's like fingernails on a chalkboard to me, so I surreptitiously sneak in and rearrange the silverware before we sit down to eat. I also always put on teaspoons even if I know we won't be using them because the place setting looks naked with only a knife and fork.

Maybe table etiquette, like formal handwriting and the family meal, is becoming a thing important only to a former era. Maybe the niceties that I took for granted all my life and didn't think of as particularly high brow, but just how things were "done" aren't considered important by anybody any more. Maybe throwing a pile of silverware on a table and letting everyone grab for themselves, printing everything, and the death of the family meal are just part of the way society is today that my grandchildren will look back on fondly as they bemoan whatever their kids are doing that seems too casual.

I've always known that, too. I used to go to lunch with a friend, and when the silverware was presented wrapped in a napkin (even a cloth one), she would unwrap it, and set it "properly" in front of her. I don't usually put spoons on for just the two of us, but I do put the knife, fork, and napkin in their correct places.

Table settings were developed for a reason. We don't always have those reasons. Even though I understand about wrapping the flatware (what my husband always called "silverwares"), it always says to me, "rush job."

I never got to teach the kids how to set a table because Daddy did things his way -- like pouring the juice on the counter where he could make sure they were even. But everyone knows (I think) how to set a table for company: forks on the left, knives on the right.

It's like "please" and "thank you." Is it a reason for the younger generations to laugh at us?