Walt and I are learning that with age come urges and sometimes the urges are stronger than you want. Like when you're in bumper to bumper traffic that extends as far as the eye can see. Like when you are driving around a mall looking for any shop that might have a facility. Like when you attend a TV taping at one end of a studio lot and the nearest restroom is almost back on the street again and you just aren't sure you can last that long and don't want to embarrass yourself in the hallowed land where Mickey and Judy used to play.

Welcome to our day! A day of great fun and lots of "willImakeit? whereisadamnbathroom?" "ohgawdpleasehelpmeholdit" kinds of moments for both of us. We are happy to report that we have both come home in the underwear we left the motel in and that, in retrospect, we can (I hope) laugh at what was definitely not fun at the time.

But I'm getting ahead of myself here.

Mike and Char came to our hotel and we went to Denny's for breakfast. The slowest Denny's on the planet. First mistake: too much coffee and orange juice.

We were supposed to be at Sony Studios (the old MGM lot) at 10:45 to watch a taping of 3 episodes of Jeopardy, which we had been looking to for a long time.

We allowed what should have been plenty of time to get there, but the freeway was literally a parking lot. We only had about 15 miles to drive, and it took us nearly an hour. The top speed from our motel to the freeway on-ramp was about 3 mph...and we had to go about 10 blocks. Mike finally took a side road that got us around that back-up, but this is what we encountered as we merged onto the freeway itself 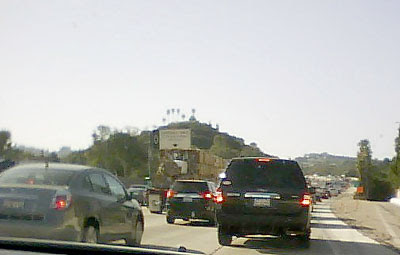 (we had been instructed not to bring cameras or cell phones onto the Sony lot, so my stuff was already in the trunk and I had to take this with Walt's cell phone). It was like this as far as the eye could see. After a very long time creeping along, watching the clock get later and later, we moved to the diamond car pool lane. A "car pool" is two people, and once we got there things zipped along pretty well, while the other 3 lanes of traffic continued to inch forward, each car with only one person in it, which perhaps explains part of the problem. How do people do this every. day? And this wasn't even rush hour!

As we moved through this mess, we kept exchanging text messages with Mike and Char, who had disappeared in the melee.

Things were getting desperate in the "Depends" department, but we couldn't stop at a gas station because Char had the tickets for the four of us and so our car had to go through the studio gate behind their car. But eventually we managed to find relief, though it took some inventive thinking.

And finally there we were under the gigantic picture of Alex Trebek on the side of a building where Jeopardy is taped, then in the theater and then announcer Johnny Gilbert was doing the warm up. First surprise was discovering the Johnny, in his white satin jacket and either poor toupee or bad hair day, reminded me so much of Liberace!

The tapings were fun -- no surprises (except now we know what happens on December 11, 12, 13). During commercial breaks either Trebek or Johnny Gilbert answered questions. All four of us asked questions (I must be still on a brave high after giving my comments at Kathy's funeral).

Since we couldn't take pictures, they gave us each postcards that had the date when our shows would air (beginning December 11). 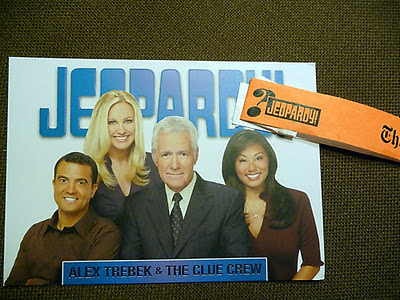 As we left the parking lot, I took this picture of the top of the gate into the studio lot... 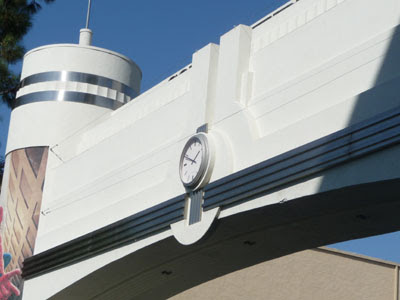 ...and got yelled at for taking pictures on studio grounds. Well excuuuuuse me!

We went to lunch with Char and Mike and passed an "antique" (i.e., "junk") shop, where I saw this lovely statue. I decided that if I were a mermaid. And thin. And Polly were a dolphin, this could be us! 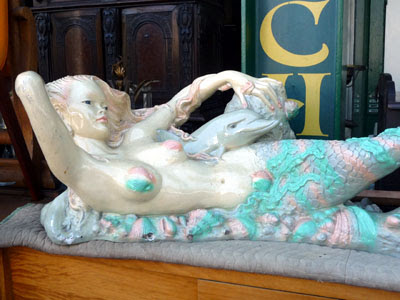 Hoping to avoid some of the traffic, we chose the beautiful Pacific Coast Highway to drive up to Santa Barbara. 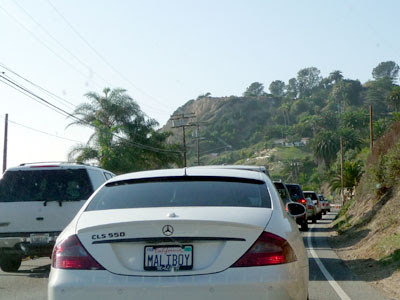 Not sure we avoided the traffic, but at least the views were nicer. I repeat, how do people do. this. every. day???? 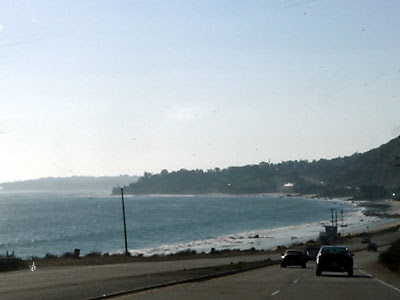 (as you can see, it did clear up, from time to time)

Now we are in Santa Barbara and have a date with Brianna tomorrow. I understand a bouncy house is involved...
Posted by Bev Sykes at 12:02 AM

Email ThisBlogThis!Share to TwitterShare to FacebookShare to Pinterest
Labels: jeopardy

Hey at least it was a nice trip right ? it got you out of the house . the pacific coast highway is beautiful . take care .

That's age? I've had that problem for more than sixty years!

I don't know how people endure that kind of traffic. (One of the reasons I never wanted to live in California.) I don't understand the narcissism of people who can't take public transportation or at least carpool.

I would love to be on Jeopardy. Do they have a squirrelly Senior citizen week? I will take SALES for $299, Alex.
The little French Lady wants to know if you met the Canadian guy. Alex Trebek.

Well, not ALL of California is like this! But I sure hate driving in the LA area.

And Jon...tell the French lady we got to be in the presence of the Canadian guy, but didn't actually meet him.