Gosh. Now I'm under the gun to be clever and creative. I hate it when that happens. (Not really).

Y'all remember a couple of days ago when I was whining about nobody liking me and how I was gonna go out and eat worms and stuff like that.

I suppose I never was all that close to many families other than our Pinata friends. Char had a wider circle of friends. But I do remember the people that we knew and enjoyed chatting with when our paths crossed.

So when Char said she was having lunch with two of them, Fran and Sue, and invited me to go along, I was happy to say yes. I have seen Sue, off and on, over the years at social functions, but we moved from 1973 and I don't think I've seen Fran since then.

It was fun driving into the old neighborhood again. I met Char at Fran's house and together we drove to the Montclair Golf and Country Club to meet Sue.

What a great time we had! It was like falling back into a place we had been 30+ years before. When I got home, Walt asked me questions like "what is so-and-so doing now?" and "where is so-and-so living now." Heck, we didn't talk about stuff like that. We just chatted like we had seen each other last week.

We talked about travel and shared funny stories. Char regaled everyone with her tales of Petropavlovsk, Kamchatka, one of the trips we didn't make with them (and I'm not sure if I'm sad or happy about that!). We laughed about things we remembered about our children (Char's daughter Jenny once brought Fran's son home from kindergarten--kind of a "he followed me, can I keep him" moment. That's how Char met Fran, when she called to let her know that she had her son. Fran was very relieved!)

Fran asked if we like to play cards (we all did) and said that she misses having someone to play cards with, so we have naturally all decided to get together after the holidays and play cards. (I may have to teach them 65, which Char insists is too complicated a game)

Fortunately the Golf Club restaurant had very little business, because we sat and talked and talked and talked long after we had finished our lunch. Char told them they'd read about themselves in this journal, and I passed out cards with the URL. I went home on a real high.

This evening Walt and I went to Thai Nakorn restaurant, which is located next door to Walt's old office. They were donating 15% of the price of each meal tonight toward Thailand Flood Relief, so we had a fantastic dinner of curried duck and pad thai. The owners of the place always welcome Walt like a long lost friend and they give us a free dessert at the end of the meal. Usually it's sticky rice with mango, but tonight it was something different: 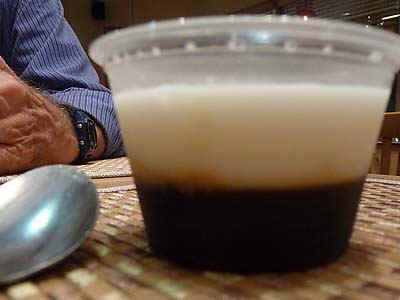 This was described as Thai jelly on top of some jellied coffee mixture. Definitely different but decidedly delicious!
Posted by Bev Sykes at 12:42 AM

Email ThisBlogThis!Share to TwitterShare to FacebookShare to Pinterest
Labels: friends

so sorry i am too far from davis, i would happily have lunch with you:)

I figure that someday I will once again be close enough to a group that plays cards. I will probably have to relearn. The last regular players moved away (very far away) about two, um, three years ago. (time flew) I can be patient.