We MUST Get Together Sometime

"Next time you're in the area, let me know and we'll get together." How many times have I heard that?

I'm thinking of one particular friend, whom I have not seen in more than 25 years, though she lives in the Bay Area. Periodically, I send her an e-mail and she always responds with delight, happy to hear from me, sad that it has been so long since we have seen each other, and telling me to let her know when I'm going to be in the area and we will get together.

I always have the same response...that when I'm in the area, it's usually for something specific, but I'm more than happy to make the drive down specifically for lunch with her and suggest that she let me know when she is free. Then I don't hear from her again until I write again.

I actually thought we might make it this year. We were honing in on specific dates and she said she would be house sitting, and would get back to me when she was home again. That was before we left for China.

I don't know if this is a common thing, but I'm beginning to get a complex about it, the number of people who say that they want to get together for lunch or dinner or whatever and that they will "get back to me" about it, and then never do, until the next time we talk, when they tell me again that they really want to get together with me. There is one friend who took 20 years before we finally did get together. We had so much fun, she said, that we needed to do it again, sooner this time. Whenever we talk, she reminds me that we are going to get together, either after the rain stops or when it's not so hot, or when their lives aren't all that busy.

Some tell me that I'm so busy that I should call them whenever I have free time. I always respond that really I'm not that busy and if they give me a couple of dates, I'm sure I can free up the time. But they never do.

I searched for a childhood friend for many years, unable to find her because she had married and I didn't know her married name. I finally connected with a mutual friend, who gave me my friend's contact information. We actually spoke on the phone. "When you're next in the area, call me," she said. I gave her my standard "I'd be happy to make a special trip to see you again, just let me know when you're free." She promised to get back to me, but never did.

One of our foreign students has been going to get together with us and mutual friends for about four years now. We actually do get together with this group occasionally, but it's never "soon," but more like three or four years between visits. There is a real posibility that someone in this group will die before we get together again. I last wrote to suggest that we do it soon. I was told that they would get back to me soon. I'm still waiting.

A former co-worker tells me every Christmas that we should get together for lunch after the holidays. I tell her I'm ready whenever she is. I haven't seen her in more than five years. She's never "ready."

"I'll talk to you after you return from China," said a friend before our trip. It's been nearly six months now and, despite attempts on my part to contact her, there has been no response.

You get a complex, you know? What did I do? What did I say? Why am I OK to talk to and to promise getting together, but why do so few people really want to make a date to get together after all? 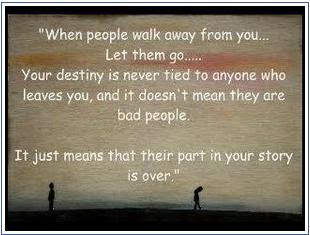 (Or maybe I should just give up and try to live by this saying.)

It makes me understand why my father was such a hermit in the years before he died. It's easier to hide in the house and do my own thing -- writing, watching TV, reading, whatever -- than to face the rejection by friends you thought enjoyed your company, but who apparently don't really.

(That said, however, I am having lunch with Char and two friends I haven't seen in years this week. SOMEbody loves me!)

I felt so moved by that poem that I wrote it down and I so know how you feel about those people . I have had people do me that way as well . Oh well take care .

Eventually we learn: not all friends are forever. People come into your life for a reason, a season or a lifetime. You understand that they are not there forever, and you are grateful for the time you have together.

After being ignored a few times, I remind myself that I am not responsible for other people's moving on.

Just Curious. Why don't you suggest the date/time?

Well, the 25 yr woman I said I would be in town every Monday for the next six weeks and asked which day would be good for her. Never heard back.

The one who called right before we left for China has not answered any of my messages.

When I suggest date ranges for the co-worker, she says she will get back to me.

It's not for lack of trying!