The Staff of Life

No bread?
No car?
No problem.

Walt went off to Berkeley for his dental appointment and I was at home without any bread.  Actually I haven't had any bread in several days and have made do with tortillas and other things, but today I had a hankering for bread.  So I just hauled out the bread maker and made a loaf of bread (thanks Neil Rubenking!).  It wasn't any special bread, just your plain run of the mill white bread...but is there a better aroma to come home to than freshly baking bread? 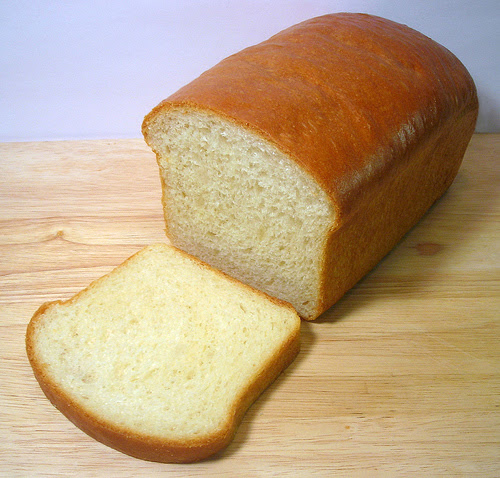 I was remembering the days when I made all of our bread.  Seems impossible to me now.  But back in the day, Char, Pat and I used to go to a specialty store where we bought all sorts of different flours (I used to love cracked wheat) and other ingredients and we really made most of our own bread.   (I remember that there was a character on a soap opera in those days who seemed to be making bread every time she was on the screen--and she NEVER got the hang of kneading bread dough.  It drove me nuts.)

I made bread at least twice a week, sometimes more and spent a lot of time bend over the breadboard kneading dough (which I don't do any more).  I heard once that the quickest way to get the gluten active was to throw the dough down on the board as hard as possible.  We had a shy sheltie in those years and he would run and hide whenever I started throwing the dough around.

(Later, I got my wonderful Kitchenaid mixer with a dough hook and that made the whole process easier and I didn't have to scare the dog any more.)

My staple was Cuban Water bread, which just had yeast, water, sugar, salt and flour, but I used potato water and it turned out huge, probably because you started it in a cold oven and so it continued to rise as it began to bake.  It also had a fabulous flavor.

There was also a quick loaf bread which rose faster because it used more yeast, and it had a different flavor because the sweet element in it was honey, rather than regular sugar.

Refrigerator potato bread was great because you could keep the dough in the fridge for up to 10 days and use it for loaf bread or for rolls.

But I think my favorite was Whole Wheat Spiced bread because it got its flavor from cumin, one of my favorite spices.

Char got tired of making turkey stuffing, so developed a recipe for "stuffing bread" where all you had to do was cut it up and add liquid and stuff the turkey--this was before you could buy pre-seasoned bread cubes in the supermarket.

We also got into sourdough.  I don't remember how that happened, but probably through Char, since she lived in Alaska for awhile.  But we all had bowls of starter in our refrigerators (I kept mine for over 10 years until a helpful visiting foreign student decided to clean my refrigerator one day while I was out and proudly told me she had thrown out "that terrible smelling bowl in the back of the fridge.")

You have to be dedicated to keep a starter going, using part of it for your new bread, replenishing it and then letting that ferment so you can use it again.  I made lots of sourdough breads, but we also made things like scones (very best scones I ever had out of Engand were my sourdough scones).

Of course sourdough pancakes were a favorite.  Whenever we went camping, Char brought the sourdough starter so we could make pancakes in the morning.  We would go hunting huckleberries in the afternoon and the kids would spend the afternoon doing "quality control" (tossing out the leaves and the bad berries).  At night Char would sleep with the starter so it kept warm and was ready to become pancakes in the morning.  And then we cooked the pancakes on the Coleman stove and ate them while sitting around the fire pit (then it was time to go huckleberry hunting again for the next morning).  Some of my best memories include those sourdough blueberry pancakes.

I rarely bake bread now because it's just Walt and me and if I make bread, he eats a slice and I finish the loaf, which is exactly what I shouldn't do.  But it sure was nice always having homemade bread in the house.

At that time we also had a stove where one of the burners was sunken so that you could keep a pot simmering on a burner down below all the others.  It allowed me to have homemade soup going most of the time.  A great place to put leftover vegetables, bones, etc.

I guess nobody makes that sort of stuff any more, at least not enough to still build stoves like that.  It's easier to buy take-out, I guess.
Posted by Bev Sykes at 9:09 AM

Email ThisBlogThis!Share to TwitterShare to FacebookShare to Pinterest
Labels: bread

I used to keep a plastic icecream container in the freezer, and put all my leftovers in it (vegetables, meat, potatoes, rice, gravy, etc.). When it got full, I added home canned tomatoes and chicken broth (also from the freezer), and it was our "freezer sludge" soup - a great favorite. Never got into bread-baking, though.