I remember way back in my early days of being a critic when I sometimes had two shows a weekend to review.  Rarely, a 3-show weekend, which wiped me out.

Since I joined the staff of Sacramento News and Review, I review more shows than ever, with three show weekends being more common.  But I think this was the first four show weekend I've had.
It started Thursday night with a production at the university of Vanya, Sasha, Masha and Spike.  It's a comedy that celebrates Chekov plays and the production was wonderful.  Even if the actors hadn't been so good, it's worth the price of admission for the set alone 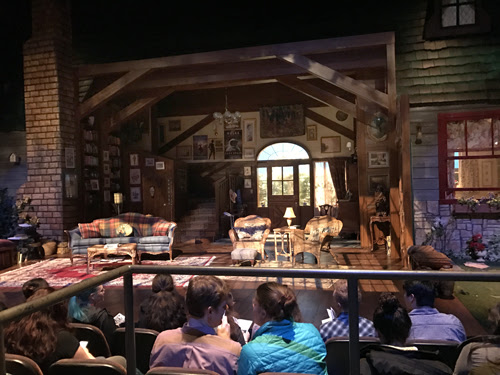 But the show was good too, probably my favorite of the four shows we saw.

The next night it was The Diary of Anne Frank.  Something ironic about seeing a show of Jews hiding in an attic so that they won't be rounded up by the police at a time when there are people who are fixing spaces where they can house illegal immigrants to prevent them from being deported.  The set for this one wasn't as gorgeous, but also a complex set.

Another good production.  The girl who played Anne took on a huge role for someone without a lot of experience, and she did it very well.

How to Succeed in Business without Really Trying was a bit of a disappointment.  I'd reviewed this company previous two productions of the show and gave them a rave review each time, but this one seemed slow moving.  The first act dragged and both Walt and were having trouble staying awake.  The good stuff happens in the second act anyway.  There were enough sorta-wow moments in the show that I was able to give it a good review.  I wrote about the outstanding performers in the very large cast and just didn't mention the ones that I didn't think much of.

We ended the weekend with a matinee of Shakespeare's The Tempest.  It starred one of my favorite local actors, Matt K. Miller, as Prospero. 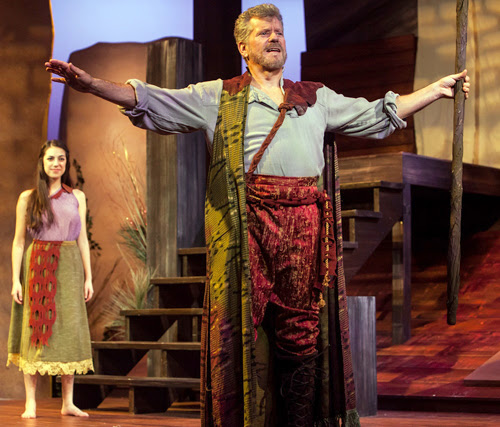 This is a Shakespeare that I had not seen before and I will have to think about it before I write the review, but since I have already turned in 3 reviews to the Davis paper, I can be a little late with this one and get it right.

Today was also Walt's birthday and so after the show, we met Ned and Marta at an Italian restaurant near the theater.  We were much earlier than I thought we were going to be, so we sat and had wine.... 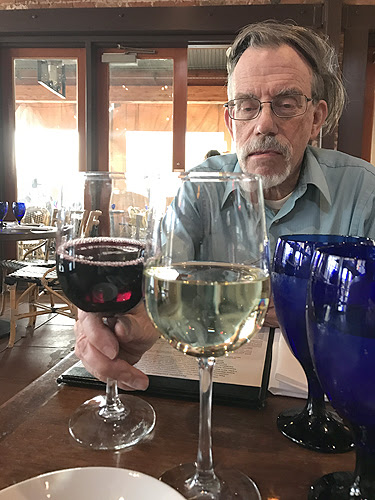 ...and a starter of flatbread with three different dips -- a hummus, an olive tampanade, and a piquillo pepper romesco.  They were all delicious, but I loved the romesco. 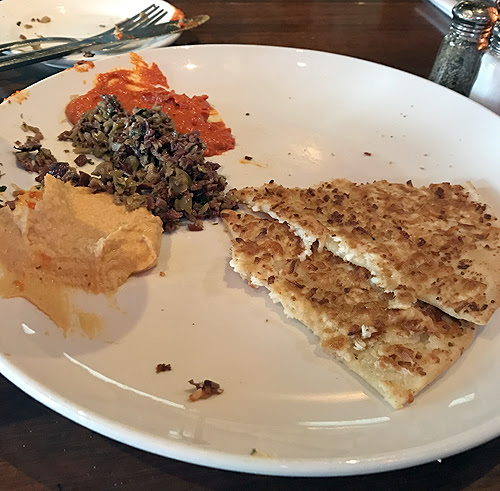 We had a nice dinner during which Walt got calls from both Tom and Jeri, so all the kids had checked in.

So we have passed through "birthday season," my reviews are almost all written, and I only have one show to go to next weekend, so it almost feels like this is a vacation week.
Posted by Bev Sykes at 1:15 AM