As I sit here in my office writing this entry, Walt is busy collecting all of the garbage from the house and dog poop from the yard so that he can take our 3 garbage cans (we are into mega-recycling in this town) down to the curb for garbage pick-up tomorrow.

Walt's a good guy and while I mention him in this journal now and then, I never actually write about him, so I thought that on this Valentine's day, I would do just that.
I knew I had someone special the day we brought Jeri home from the hospital.  We arrived at our apartment and he parked the car and told me to wait, then he went inside and when I went upstairs holding our precious new baby, the house was full of pink roses and there was a record of music box music playing lullabies in the background.

How he loved that baby! 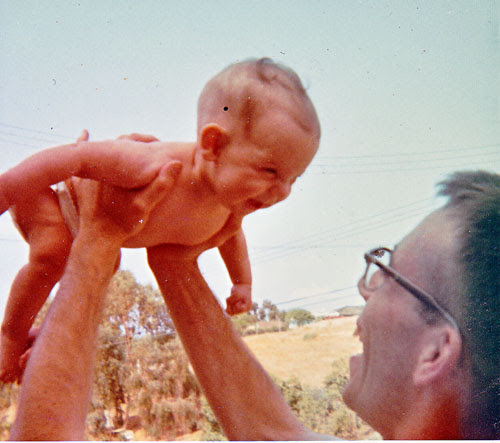 It warms the cockles of my heart that he and Jeri have always had a close relationship.  I'm jealous of her.  I would like to have been that close to my own father.

But Walt was always a great Dad, whether coaching Little League or going to Indian Guides, helping make a Pinewood Derby car for the Boy Scouts, working backstage at Sunshine Children's Theater, or just reading "The Night Before Christmas" every Christmas eve. 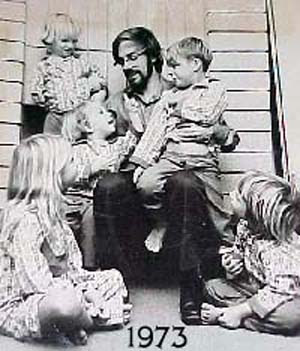 There is nobody who doesn't like Walt.  He'll do any favor anyone asks, happily, without complaint.  Right now he's on the board for Citizens Who Care for the Elderly, and has been for many years, helping raise money for people who can give caregivers in Yolo County a break for an hour or two now and then.  He does his own respite work with our friend who is in a wheelchair so that his wife can get out a couple of times a month.

He's so patient with my difficulties with my mother.  He has been there and knows how difficult this is for me at times.  His mother didn't have dementia, but she was quite incapacitated by her blindness and inability to move much.  He went to Santa Barbara as often as he could, and after a particularly bad time, he stayed there for a couple of weeks, sleeping on her little half-couch and making sure she got her "Boost and cheese" every day, in an attempt to keep her weight up.

He has been an amazing husband.  Sometimes I wonder what I did to deserve him.  When he retired, he said he had decided to take over the job of keeping the kitchen clean, and every night after dinner, he takes the huge mess I have made preparing it and makes the counters (or as much of the counters that don't store stuff permanently) all clean again.

He has done his own laundry ever since the day I washed his Air Force uniform (when he was in the reserves, back in the 60s) with something red and didn't realize that his uniform was pink because he left before the sun came up.  He discovered it when he got to the base.  After that, he took over doing his own laundry and we have both been better for it!

He has put up with all of crazy part-time jobs and my weird projects, especially 10 years of hosting foreign students -- and what experiences we had with those 70 kids from around the world!
He is my chauffeur and attends all these plays with me.  He understand my terror of big trucks (a terror which developed for absolutely no reason one night in 1986 and has not left me) and he is careful either NOT to pass a large truck or to pass it two lanes over or to go slow and stay behind the truck.  He puts up with my intermittent gasps when my mind sees imminent highway danger where there is none.
He drove me to and from Logos every Thursday for four years, since my knee won't let me ride a bike any more and the City of Davis won't let me park for four hours.  (Of course the beer he got every Thursday before he picked me up, at the pub around the corner from the book store, might have been an incentive!)

We have traveled the world together and he's always been very encouraging, helping me make it just a few more steps when I'm ready to give up, and waiting for me to rest when I just can't go any farther.  I have seen more of the world than I ever dreamed I would....and walked farther than I dreamed possible.

I love the relationship he has with the dogs, particularly Polly.  He is "her person" and she prefers to sleep in his lap at night.  If he walks by the chair where she is sleeping without stopping to pet her, she jumps up and barks and barks and barks until he comes back and does so.  He has liked all of our dogs, but Polly is the first dog who chose him as her person and she is so cute with him.

He keeps me supplied with mini ice cream bars at night while we are watching TV after dinner.  We both love to watch Jeopardy together.

He is kind and loving and does much more than his share around here and I love him for it.  I don't exactly sit and eat bon bons every day, but I definitely don't do a fraction of what he does.
He's a very special man and I don't tell him that often enough.  So now I have.  Happy Valentine's day, dear!

Email ThisBlogThis!Share to TwitterShare to FacebookShare to Pinterest
Labels: Walt