I don't know how long I've been watching The Food Network, but probably since it began.  I always liked watching cooking shows on PBS, like fabulous Julia Child, funny Joyce Chen (you should hear Char talk about Chen's recipe for Peking duck...and I still think of "oil" as "oir," which is how she pronounced it), and Martin Yan, from whom I took two series of cooking classes here in Davis.  What fun he was to learn from! 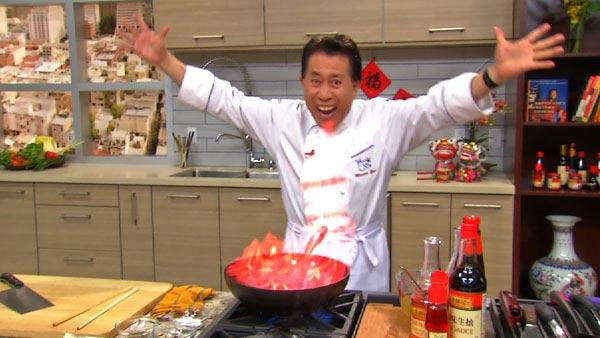 I don't cook Chinese much any more, but there was a time when I could prepare a 7 course meal without hardly blinking (Tupperware is a necessity!) 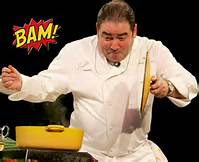 But then the Food Network came along.  At first it was similar to the PBS shows, with chefs like Emeril Lagasse, who was there to show that fancy recipes weren't that difficult after all.  His signature "Bam!" was when he tossed his special spice mixture into a pot with panache.  The audience applauded.

The problem with Emeril, for a cook like me, is that while he made it all look simple, a look at the length of the "easy" steps was often daunting and I don't know that I ever made any of his recipes. 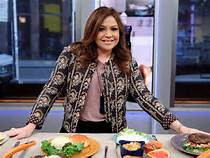 Rachael Ray was probably the first Food Network "star" who was relatable to the average home cook.  Her "Thirty Minute Meals" made cooking fancy stuff seem like child's play and I enjoyed her.  Unfortunately her fame propelled her into overkill, with a line of cookware, and even furniture, and now a daily show (is it still on?).  After a few years, I went into Rachael overkill and stopped watching her.  Entirely too perky!

But the thing about Rachael Ray is that she ushered in a new look in food programs for The Food Channel.  I don't know exactly how it started, but maybe it was the "Next Food Network Star," a competition program, like The Apprentice, where a bunch of home cooks fie to get their own cooking show.  The first winner(s) were a gay couple, The Hearty Boys, who did a show for two seasons about entertaining.  We even find losers on the Food Network in some capacities like Carla Hall (who was on Bravo's Top Chef, but lost). 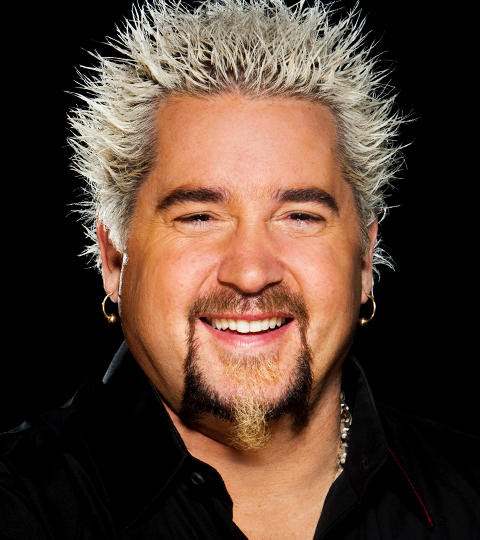 The bizarre, yet lovable Guy Fieri was another early winner.  He has parlayed his win into a dominating presence on The Food Channel, with not only a cooking show but a game show (Grocery Games) and the ubiquitous Diners, Drive-Ins and Dives, which I swear runs more often than Law and Order SVU.  Show after show of burgers and other comfort food in dives across the country.  Even I am often appalled by the amount of grease consumed in the average show, though there have been some places I've seen that have intrigued me (like a crab place in San Francisco that I will visit someday!

It's kind of embarrassing how many of the winners of Next Food Network Star I can remember.  Like the adorable Indian cook Aarti Sequeira; the saccharine Demaris Phillips, whose food I like but whose personality rubs me the wrong way; Jeff Mauro, the sandwich king; Eddie Jackson, the most recent winner; and Richard Blais, who moved from show host to show judge, as he often appears on shows like Chopped, or Cooks vs. Cons.

The Food Network still has chefs that I consider real "chefs," like Ina Garten (the Barefoot Contessa), Bobby Flay, and all those chefs on Iron Chef America.

It was a crossover when Ree Drumond, "The Pioneer Woman," whose food blog I followed for years was signed for a season on The Food Network, which has run into several seasons, now -- we've watched her kids grow up on television. 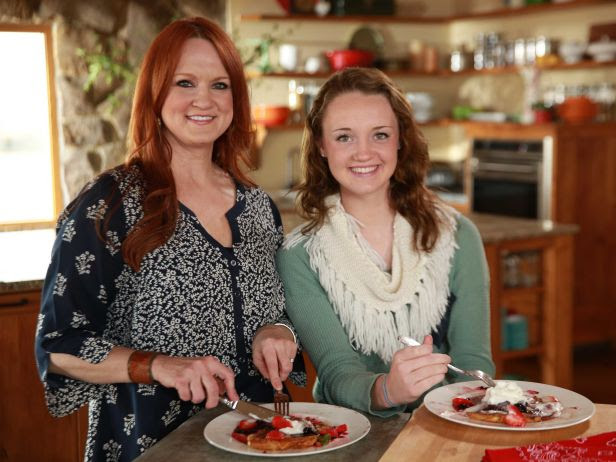 The network now even has make-over shows with chefs like Robert Irvine, who takes restaurants that are in danger of failing and helps them recover.

Then we began seeing celebrities doing cooking, supposedly from their homes. Chefs like Giada DiLaurentis (granddaughter of director Dino), Valerie Bertinelli (One Day at a Time), Tiffany Thiessen (White Collar), Patricia Heaton, Marilu Henner, and my favorite, country singer Trisha Yearwood, perhaps the most relatable (for me), since she cooks like I do!  (I've been watching The Food Network for so long that I remember before Giada got married, when she was pregnant, after she gave birth, and now her divorce!) 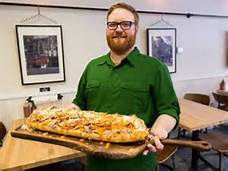 The one show I have no desire to watch is a new show called Ginormous Food, where a guy eats enormous quantities of food.  Pizzas larger than truck tires, 10-patty hamburgers, taller almost than the guy who is eating it (with onion rings on each burger), enormous bowls of spaghetti etc.  It is done with a cheering audience  Some how in this day and age where hunger is so prominent, this show has zero appeal for me. 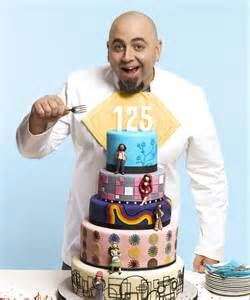 Duff Goldman became famous for making incredible cakes and had a regular program (Ace of Cakes), showcasing those cakes.  (He made Obama's inauguration cake, which was copied this year by Trump).  But he now has become a host of the Kids Baking Championship, where he helps and encourages young bakers to create amazing things.

That's the latest thing in the Food Network....kids' competitions.  It boggles my mind watching these young bakers, some as young as 9 (Brianna will be 9 in April).  They make such incredible things and they have the lingo down pat.  They talk about "depth of favor" and "flavor profile," and their personal point of view.  I wouldn't know a depth of flavor if it bit me on the butt.  But these kids know the lingo and they know how to "plate" attractive foods.  They put me to shame! 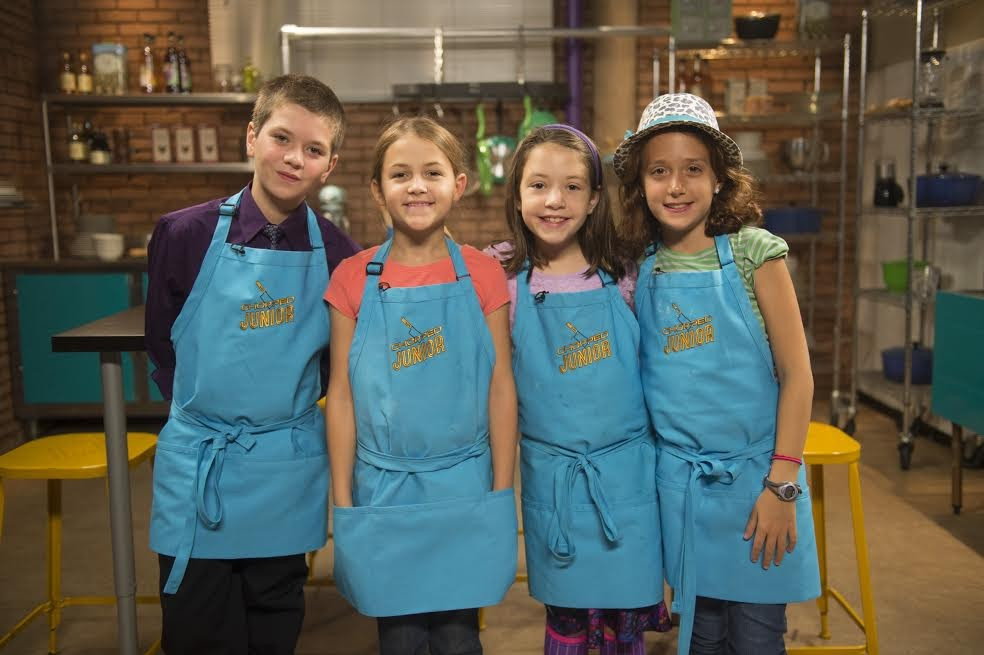 The most amazing kids are those who appear in the show Chopped, where contestants are presented with baskets of ingredients which must be used in creating a dish (on Halloween, one basked contained eels, candied bats, and congealed blood!); another round on another show featured whelk snails and lemon bars.  An easier round was making an appetizer out of chicken soup, pork, squash and BBQ sauce.

The Food Network has come a long way from Emeril Lagasse, and now has a second cable channel as well, The Cooking Channel, for the shows that don't fit into the Food Network schedule.
I suspect it has done wonders for home cooks, and maybe more people are trying cooking at home than buying dinner out every night.

I should add parenthetically here that I had no idea how much I knew about The Food Network before I started writing this ... and I haven't even gotten to Cooks vs. Cons or Bakers vs. Fakers.
Posted by Bev Sykes at 9:02 AM