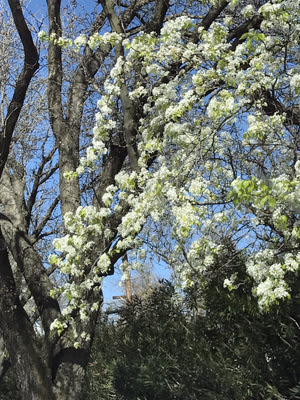 It's one of my favorite couple of weeks in Davis, when all the trees as bursting forth into blossom.  It's just starting now.  In another week, the entire F Street, from 14th Street down to 1st Street will be  under an arbor of these white blossoms.  I asked one year what kind of trees they are, and someone told me, but of course I have forgotten now.  But I do love driving under the arches on my way downtown.

I took my mother out for a drive one year, when the blossoms were at their peak and she seemed not even to notice.  These days she doesn't notice beautiful gardens or wonderful blossoms; she just concentrates on green leaves on trees.  Spring is something else I can no longer share with her.
Today I had lunch with my friend Kathy, with whom I lunch once a month.  We had both watched Trump's first press conference earlier in the morning and both of us were just about speechless.  As Chris Matthews said, "Kellyanne Conway had it right...she called it 'epic.'"

I'm wondering how Trump is feeling about FOX news tonight.  FOX, whom he described as the only non-FAKE news service, tore him to shreds for his lies.  The man seems incapable of telling the truth.  He continually insists he won by "the largest electoral college margin in history," though it has been shown over and over again that this is not true (Clinton, Obama, and Bush-1 all got higher votes)

Over and over he twisted questions he didn't want to answer into some sort of an attack on Hillary Clinton -- he's still campaigning against her.

He insists there was a "very smooth" roll out of the travel ban, television news reports to the contrary.

He's been asked three times ow, that I have seen, what he is going to do about the increase in anti-semitic and ethnic violence and he has yet to answer the question except to say he is the least anti-semitic person you'll ever meet and then to talk about his wonderful family and how any blacks voted for him.

Try to follow the logic of his answers about Russia.  It will make your head spin.

Re his 90 minute attack on the media, Trump admitted that "the leaks are real, but the news is fake."  Huh?  All those leaks that he loved so much when they were directed at Hillary are now terrible and though during the campaign he invited Russia to hack Russia's server, and said that he "loved Wikileaks," he now wants to do an investigation and arrest the people who are leaking information.
He is the man who cries wolf every time he opens his mouth and one of these days he's going to have a very important message to deliver and nobody will believe him because they have become so used to his lies.

BUT, the worst part of it all came after the conference.  I had to leave the house, so I listened to the end of it in the car on the way to meet Kathy at the restaurant.  When it was over, the radio host opened the phones to comments from listeners and one after the other they came on raving about what a wonderful showing it had been for Trump and how he was turning out to be exactly the president they hoped he'd be.

It was enough to make my head explode.

We got our anger and frustration out before we ordered lunch and then got caught up on each other's lives once again, since there was nothing left to say about this very dangerous man who is now the most powerful man in the world.

Email ThisBlogThis!Share to TwitterShare to FacebookShare to Pinterest
Labels: Trump

HAPPY BIRTHDAY, my Friend - I guess I'm a day late, since I just got this on my Feedly feed.