Last night I received a phone call from a former co-worker with whom I have not had contact in more than 20 years.  I expressed delight at hearing from her and asked how she was.  There was a silence and then in a tremulous voice she said "well...not very well."

As it turned out, the man she describes as her soulmate for the past 10 years had just died, unexpectedly.  She said that she was "doing this all alone" and that she didn't know what she was supposed to do.  My heart went out to her.  We had worked together for a couple of years and she always reminded me of Jeri.

We talked for a long while and I learned that her neighbor had come to bring food (I didn't ask if it was ham) and criticized her for the condition of her house, which didn't help any.

She said she couldn't think of who to call, so called me.  We were working together when David died and she knew I had been through something like this before.

I finally asked if she'd like me to come over in the morning (we had a show to review that night so I couldn't go right over right then).  She thanked me and said she would like to see me.

Before I went, I found a little book that had been given to me in 1986 by a woman I worked with.  It was a new job.  I had only been there a couple of weeks when my friend Gilbert died.  Though of course I had been through deaths before (including that of my sister), Gilbert's death was the first to hit me so hard and I was having a difficult time keeping it all together while I worked.  It was a small office -- just four of us -- and this woman went out to lunch.  When she came back she handed me a book called "How to Survive the Loss of a Love."  I have probably written about it here before.  It's by Peter McWilliams and Harold Bloomfield and is a very thin book, just a little over 100 pages, that can easily be read in half an hour.  It contains prose and poems and it lays out what grief feels like and how to recover. 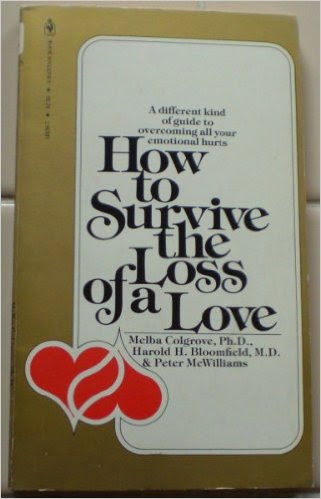 It explains at the outset that loss can be as devastating as the death of a loved one or the breakup of a romance...or something as small as moving to a new house or the loss of a job or a tooth.  The degree of the loss will determine the length of the grief, but there is still a grief to get through.

This may be the book that has had the biggest impact on me in my life.  I read it every day and marked my progress through grief by how far I could get into the book before I started to cry.  It was a few months before I could read the whole thing without tears, and by then I was on the road to grief recovery.

The thing about grief is that you never "get over it."  When you lose someone you love, you grieve.  The grief comes in waves.  Just when you think you are starting to feel better, you get hit with it again.  I described it as hills and valleys.  You start in a deep valley and gradually climb up to a hill and then slide down into a valley again.  Over time the hills get higher and the valleys are less deep and the slides come at longer intervals.  (Heck, Gilbert has been dead 30 years and I had a brief slide at a recent Lamplighters show, thinking about all the other Lamplighters who have died since then.  My sister has been dead since 1971 and before dementia took her, my mother once in a GREAT while could still feel twinges grief about her death.)

You learn during this process that while the person whom you grieve is no longer here in the flesh, their spirit becomes a part of the new person you become following their death.  Gilbert is always with me (in addition to finding me parking places), David and Paul are always with me.  Kathy and Peach are always with me.  Who I am today is the me that I started out being, and the me that was affected by my love of them.

I went off to see my friend this morning.  and spent some time with her.  My heart ached for her because I knew how she was feeling, especially since she doesn't seem to have a support system around her.

Comforting people who are hurting is a difficult thing.   As I read somewhere "death rewrites your address book."  People you thought you could always turn to turn their backs, and people you never dreamed would become friends are there for you.  I remember a woman after Gilbert died who told me that I was "too public with my grief" and I never heard from her again.  This was someone with whom I had shared many of her own traumas and tried to be supportive, but when the shoe was on the other foot, she couldn't handle it...which, of course, just escalates the depth of your own grief.  You've not only lost someone you loved, but you lost someone ELSE you loved who doesn't want to have anything to do with your grief.  (We never did see each other again and last I heard she had Alzheimers.  I don't know if she is still alive or not.)

I have seen people I knew well in this town spy me at one end of a supermarket aisle and turn and walk away to avoid running into me.  While that hurts, I remember the death of a boy who was friends with our kid.  I didn't want to go to his memorial service because I didn't know what to say.  I did go, but I don't think I spoke with his parents at all because I felt so uncomfortable.

So I understand why people act the way they do, but I also remembered that the people who helped me the most, especially after David and Paul died were the people who just let me talk.  People seem to feel if their names come up, it would be too painful, so they act as if nothing is wrong.  I remember Walt's mother's cousin in Ireland saying to us, when we arrived at her house, "Now, I won't bring it up again, but I just wanted to say how sad I was that David died."  She then would not mention him again.  Ignoring him completely like that buries him even deeper.  When you have lost someone, talking about him/her lets that person be alive again, however briefly.  I may cry, but it is cathartic.

I didn't do anything magical today.  We just sat and talked.  I found out all the information about how he died, I found out how they met, the things they did together, etc.  Just chit chat.  She cried a little (even I cried a little), but it was good.  I think when I left she felt a little better.

I will check back with her in a couple of weeks when the shock has worn off and she is really in the throes of grief and see if she needs to talk again.  Or maybe she won't need me again, but I'm glad she called me.  It was good to see her, though sad that it had to be under such sad circumstances.
Posted by Bev Sykes at 12:00 AM

Email ThisBlogThis!Share to TwitterShare to FacebookShare to Pinterest
Labels: grief