Off to the Mediterranean

Well, it's a little over a month since Walt's surgery and I told Ned this morning that there was something wrong with the calendar he's posted:  there are NO upcoming doctors' appointments.  This is a good sign.

Today he and Ned walked to the supermarket to buy a few things.  I could tell it was therapeutic for him to be out of the house and doing something.

He had several appointments this week, including the urologist to remove the catheter and then later the same day, the urologist again to decide if he had survived being without a catheter for a day.  He came home catheter-less.

He also had an appointment to have a heart monitor put on, which he will wear for a month.
He's back sleeping in the recliner again (all night golf for me again) 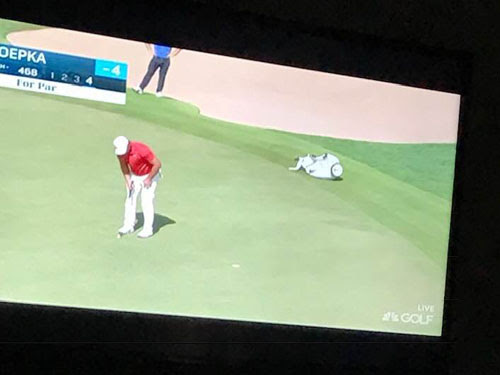 This from Abu Dhabi
This is because it's easier/faster for him to get to the bathroom.  His bladder is still in the retraining process.

Ned set up a chart for him to check every time he went to the bathroom.  Walt told me that he went every 5 minutes or so, but I know for a fact that he slept at least one hour. The chart shows he was in the bathroom 16 times through the night, so he didn't get a lot of solid sleep, but he also made it to the bathroom each time, which is a huge improvement.  Ned slept on the couch so he could be here if his Dad needed him.

He also bought the house a copy of "Mediterranean Diet for Dummies" and we are in the process of improving our diet.  Walt has pretty much eaten a Mediterranean-like diet consistently.  He has always preferred vegetables and whole grains.  My life is junk bread, real butter and chocolate.  It's obvious which of us needs to do the more changing.

He has always made his own breakfast and lunch to make up for whatever junk food I am cooking for dinner.  These days he doesn't seem to remember that he did that all the time, and has started to ask me what is for lunch, so I am going to have to start getting more pro-active on fixing lunch for him.  My lunch is generally picking, picking, picking from breakfast until dinner.

We're going to add fish to our diet, which will be interesting.  Ned doesn't like fish, but is willing to give it a try.  I never buy or cook fish because it's too expensive.  In fact, we had more fish than ever in our married life when we were doing Blue Apron and Home Chef, which makes me think that perhaps I should start up our account again, not only so I can have fish on the weekly menu, but also recipes for how to cook them.  I'm not really a big fan of salmon (except for smoked salmon with cream cheese), I know I don't like catfish and I remember loving cod when I was a kid, but I have never cooked it.  Walt likes tilapia and orders it when he lunches at IHOP with his work cronies, but I read an article about tilapia being the "garbage fish" and just can't think of eating it after that.

When it comes to fish, no species brings out the haters like tilapia.

Read up on it, and you’ll find tilapia described with words like “muddy” and “earthy”; there are entire forum threads devoted to its inferiority. This very newspaper, back in 2007, called it “the fish that chefs love to hate.”

In some places it's known as the "poop fish" because on some farms, it is often fed feces of the other animals.

a combination of rumors and credible reports works against it. Perhaps you’ve heard that tilapia are raised in cesspools and live on poop? Even the USDA says there is — or, at least, used to be — some truth in that. The agency’s 2009 report on Chinese imports notes that “Fish are often raised in ponds where they feed on waste from poultry and livestock.”

However, the Post is actually in favor of eating tilapia

Before we meet that fact with a chorus of “ewww,” it’s worth noting that turning feces into fish would be the agricultural equivalent of spinning straw into gold. Although there are important safety concerns in that kind of system, if you can manage those risks, you’ve got one of the most sustainable foods going. It’s a downright Rumpelstiltskinnian miracle, and we should root for it, not against it.

So I guess I'm going to have to learn to cook/like tilapia, as it is one of the more affordable fishes that we can add to our new Medierranean diet (I wonder if you can make a rich butter sauce to pour over it.....)
Posted by Bev Sykes at 6:14 PM

Glad to hear Walt is on the mend. It's so weird - I thought you had stopped writing as nothing had shown up in Feedly for a very long time. Suddenly, yesterday 35 new entries showed up at once dating back to December! I'm glad you're still writing.