It's a good thing Ned is here.  We are learning that I am less than useless.

Ned went out to the store today...gone not all that long.  My task was to keep an eye on Walt and if he needed help with emptying his catheter bag, I could be there.

I fell asleep and woke up as Ned was bringing wet clothing downstairs. 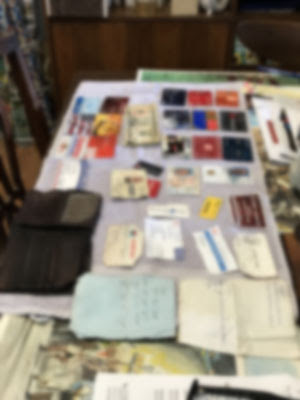 Last night Walt couldn't find his wrist watch, so we went looking  Ned found it in his pants, in the dryer.  I had washed not only the watch, but also his wallet with all of his cards and information.  I thought I was doing such a good job.  Ned had gone to the store, Walt changed his slacks and thinking I was so smart, I threw them in the washer so they would be ready the next time he needed dry pants.  I thought I had ascertained that there was nothing in the pockets.  Apparently I was wrong.

At least all his money is clean now, but his wallet is toast.  I also found how long he keeps things in his wallet.  That blue sheet of paper has four telephone numbers on it.  One outdated by at least 10 years, two for people who died long ago, and one for someone diagnosed with Alzheimers several years ago.  I suspect that if I looked around here I would find similar things that belong to me.

(Fortunately, his watch took a licking and kept on ticking.)
Later, when I took a shower, I got my hair all wet and then started rubbing in the shampoo and suddenly realized I was wearing my hearing aids.  I took them out right away and they are sitting in a bowl of rice, but I don't know if I did permanent damage.

It is clear why the family is trying to get together a schedule for people to come here to help, especially when Ned will be gone for 3 weeks helping Marta's mother.  Obviously I can't be trusted to do anything responsibly.

I wouldn't want me to take care of me, that's for sure.

But Ned has everything organized around here.  He made a schedule for Walt's meds. 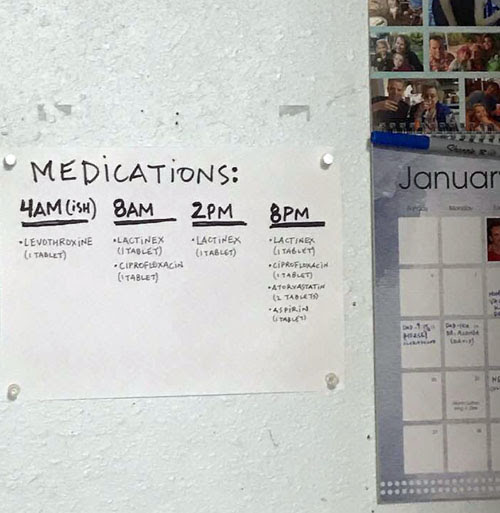 There are instructions upstairs and downstairs on the procedure for handling his catheter bag. 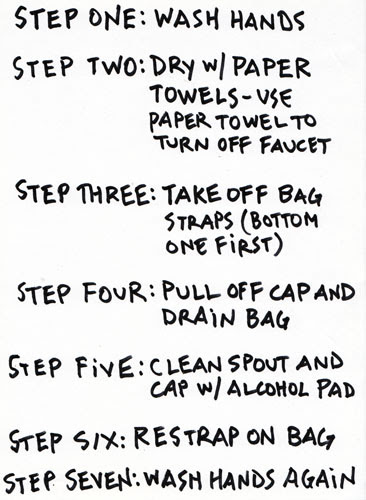 and he is keeping a detailed diary of how Walt's day goes, hour by hour, which has come in handy many times. 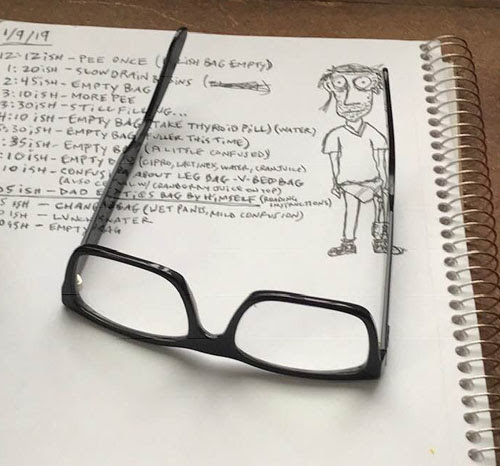 We are so organized that I hardly know what I'm doing these days, but we are so grateful that he has taken on all this responsibility.  Walt's first night home from the hospital Ned didn't sleep at all, but sat up watching his father and making sure that his catheter bag was emptied when it started getting full.  Last night Walt was able to sleep in bed with a larger collection bag, and Ned was able to get some sleep, though he still set his alarm for every few hours to make sure all was all right.

When Walt is back to normal it will be pretty much 99.9% because of Ned's diligence and dedication.
Posted by Bev Sykes at 6:00 PM

Email ThisBlogThis!Share to TwitterShare to FacebookShare to Pinterest
Labels: my goofs, Ned's organization