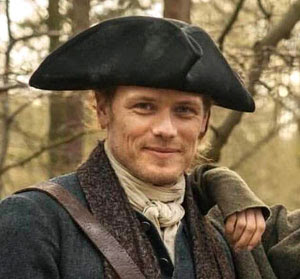 It's downright embarrassing to read many of the comments on the many Facebook sites dedicated to discussion of the books and TV show, Outlander.  For one thing, people are so nit-picky that they complain about every little thing, but for another, the slobbering over actor Sam Heughan, who plays Jamie is very disturbing.  I mean...no one can deny that this is a handsome face.  I had the same reaction when I first saw Matt Bomer, as Neil Caffrey in White Collar.  Strikingly handsome men.

But while I can appreciate the finer qualities of these actors, the sexual attraction escapes me.  I read what all these women are writing about how they affect them.  And it seems to be everyone, many of whom get very graphic in their comments.  It's kind of creepy, actually.

My problem is that I am an almost 76 year old woman and Heughan, at 38, is much younger than my children and almost young enough to be a grandchild, if Jeri had given birth early.  It's downright embarrassing to think about having such thoughts.  He's just a handsome man, whose acting I enjoy very much.

Ned told me he thought the movie Heughan was in last year, The Spy Who Dumped Me, was available on Amazon, and it is, so I want to watch that today.

But I didn't decide to write this because of Sam Heughan.  It was because of Queen Elizabeth's mother-in-law, Princess Alice of Battenberg, about whom I read an archive article from the New York Times in 1988 when her body was moved from the UK to Jerusalem.  What a fascinating woman!
She was born in Windsor Castle in 1885, the granddaughter of Queen Victoria.  She was congenitally deaf.

In 1903 she married Prince Andrew, son of the King of Greece and became a member of the Greek royal family.  They had five children, four girls and a boy (Prince Phillip), who was born June 10, 1921, on a kitchen table on the Greek island of Corfu in a house that had no electricity, hot water, or indoor plumbing. 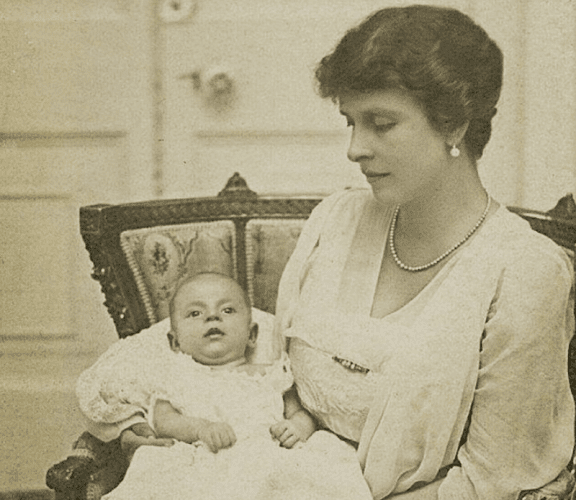 When Phillip was 18 months old they were exiled from Greece due to her husband's involvement with the Greco-Turkish war.  He was tried, convicted, jailed and faced execution until Alice appealed to King George V for help.  He sent a war ship to remove the family from Greece to Paris.  They arrived as refugees, surviving solely on handouts from their relatives. These hardships reportedly pushed Alice to focus heavily on her religious beliefs.

Things went badly for the family and in the 1930s, all four of her daughters married German noblemen and moved to Germany.  Alice’s mental health deteriorated over the next few years. According to Daily Mail, “By 1930 she was hearing voices and believed she was having physical relationships with Jesus and other religious figures.” This led to her diagnosis of schizophrenia, for which she received some pretty traumatizing treatments.


She was sent for treatment in a Berlin clinic, where “her womb was blasted with X-rays to cure her of frustrated sexual desires.” (Sigmund Freud was the mind behind this method, but it failed to cure her mental illness.)

While she was locked in a sanitarium in Switzerland, her husband left her for his mistress.  (the man who would eventually marry Queen Elizabeth was at that time parentless and homeless at age 9!)
She was released from the sanitarium in 1932 but became a drifter and did not see her son for five years.  She found herself in Nazi-occupied Greece in 1941 with her brother sending her food parcels to keep her alive, but she was sharing them with her Jewish friends.

When the Nazis started rounding up the Jews, she moved a Jewish family into her home, though she lived close to Gestapo headquarters.  When questioned by the Nazis, she used her deafness as a reason not to understand their questions.  (According to Daily Mail, she was “posthumously [honored] as Righteous Among The Nations -– the highest Israeli [honor] to non-Jews who risked their lives during the Holocaust.”) 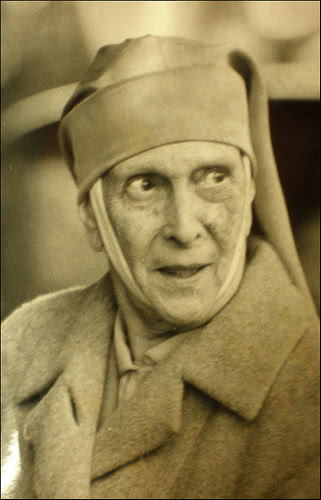 After 1949, she sold her jewels and founded an order of nuns she called the Christian Sisterhood of Martha and Mary and built a convent and an orphanage to help those in need.  She had a habit – a nun’s habit – that she wore all the time. It consisted of a drab gray robe, white wimple, cord, and rosary beads. She was commonly referred to as “Sister Andrew.”

She gave the diamonds from her tiara to Philip, who used them for the custom-made engagement ring he gave to Elizabeth.

Philip and Elizabeth brought her to Buckingham Palace in 1967, where she lived until her death in 1969.

Just before she passed away, she wrote a loving note to her son: “Dearest Philip, be brave, and remember I will never leave you, and you will always find me when you need me most. All my devoted love, your old Mama.”

Now I'll bet you didn't know any of that before, did you?
Posted by Bev Sykes at 5:45 PM