Another Day at Kaiser

Walt is still at Kaiser.  I have had to skip a couple of days visiting him, one because I had a show to review, another because his brother and sister-in-law were going to be visiting and I had not seen my mother in such a long time, I felt I should go to Atria.

I need not have bothered.  She had no idea she hadn't seen me in weeks (we were there twice when she couldn't wake up, so we saw HER, but she didn't see US).  When she asked what I'd been doing I told her I had cancer surgery and Walt was in the hospital.  She said "and what else have you been doing?"  I showed her the photo of the big bandage on my nose and she told me it was "cute."  Sigh.
I spent this morning writing the first of my 3 reviews from the weekend while Ned did a lot of cleaning.

We drove to Kaiser and spent about 5 hours there, just being with Walt so he didn't have to be alone.  We didn't do a lot of "visiting" since neither Walt nor I do much chit chatting, but Walt's brother was there and he and Ned, the two talkers, visited a lot.  I read my book.  Walt looked in the direction of the TV (turned off).

Walt's lunch was served so Ned and Norm went off to the cafeteria and brought lunch back for the three of us. 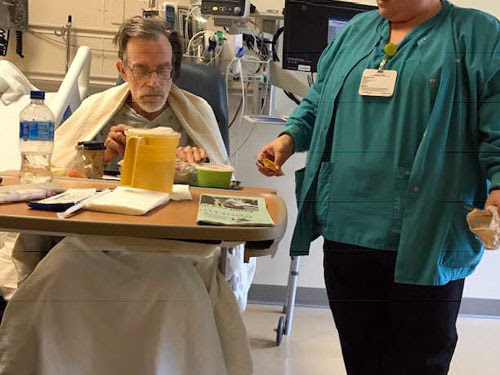 A doctor came in and said she was thinking of sending him home today, but he is still having some memory lapses and she wanted to run an MRI.  Ned and I told her that bringing him home tomorrow would be perfect because I have my post-op appointment in Dermatology in the next building over from the hospital, at 10:30 and we could all come home together after that, if all goes well.

In the middle of the afternoon, Norm decided to go home when they bundled Walt up and took him off for his MRI.  Ned went with his dad in case he needed questions re-interpreted for him.. 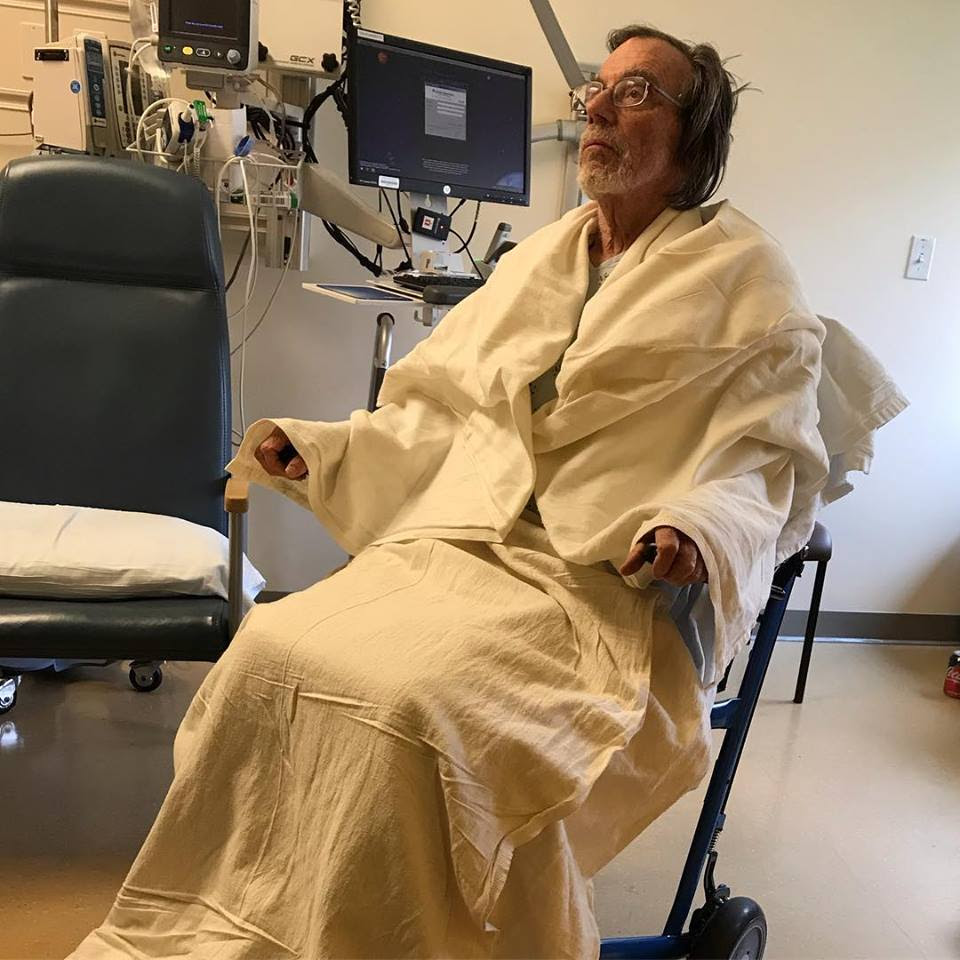 Someone said he looked like a middle eastern potentate.

Ned and I left around 5 p.m. and when we got home, Ned tore through the house finishing up the clean up he'd been doing in the morning.  Walt wants the bathrooms to be extra clean to avoid a return of the infection he's been fighting, and Ned has done deep cleaning on both the upstairs and downstairs bathrooms and they are more or less pristine (or as "pristine" as anything gets done around here!)  I'm almost afraid to use the bathroom and soil it!

Ned went home, the two of us ready to de-stress before our next trip to Kaiser.  Ned was looking forward to a steam bath early in the morning before he picks me up; I baked a batch of chocolate chip cookies!  Ironically, I saw a bit on "anxiety baking" on Colbert which I thought very funny...and very understandable!

You come home from Kaiser and check in to see what the Manchurian Cantaloupe is up to today (I can't take credit for the nickname; it came from my friend David) and I was ready to bake something.  Anything.

This is perhaps my last opportunity to sleep without watching golf all night, for several weeks, so I will have to make the most of it!
Posted by Bev Sykes at 5:56 PM

Email ThisBlogThis!Share to TwitterShare to FacebookShare to Pinterest
Labels: Walt in hospital