Where Have All the Flowers Gone?

Today was a crazy day.  The plan was to leave for Santa Barbara sometime between 10 and 11.  But there was so much to be done first.  With first my computer problems and then Walt's computer problems (he's now dealing with the guru), and Jeri arriving, and so many shows to review and a feature article to write...things just kind of got away from us ... me, more than Walt, who has been doing the yeoman's share of getting the house cleaned up for Ashley and David to move in.

Jeri planned to go to Atria at 8 and have breakfast with my mother and then we would pick her up on the way out of town. But I was dubious about the "8" part.  She says she's always up at 7, but I don't believe it.  And, in fact, Jeri decided to make it 9, called her at 8:30 to let her know she was coming and woke her up.
While waiting, she made yet another attempt to make friends with Polly, who is much more willing to be friendly if food is involved, but the minute Jeri stands up, it's bark-bark-bark all the time again. 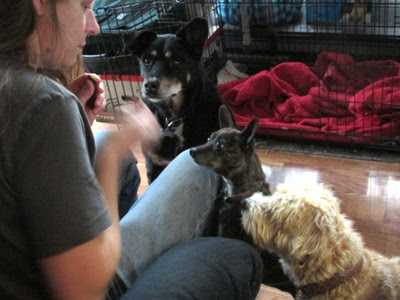 In the meantime I was still struggling with no Internet and trying to decide where I could go to post yesterday's journal entry...and then in a doh moment remembered that Atria has wifi, so I drove Jeri over to my mother's and planned to do the few things I had to do on the internet and then go home and finish the other things I had to do.

We took our annual "Grandma and Jeri" photo and Jeri had to take a Baldy and Grandma picture. 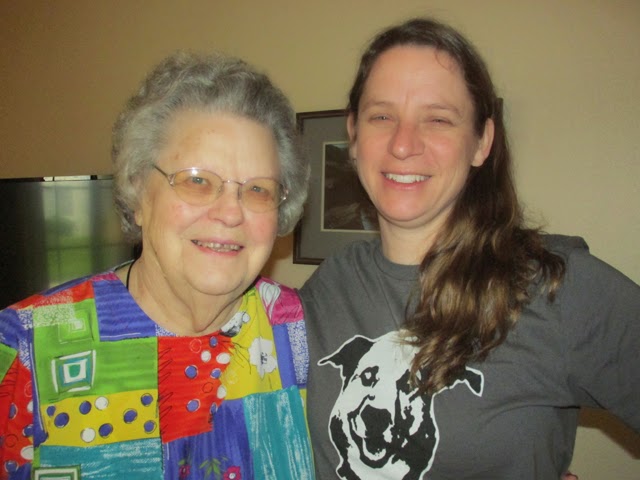 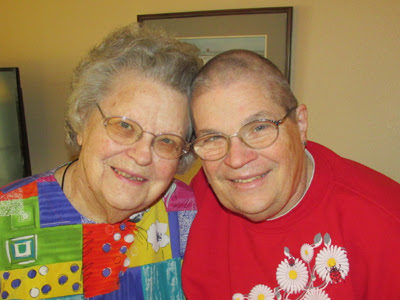 Unfortunately, the Atria wifi was being temperamental and I got this journal uploaded but it stalled when I tried to upload Airy Persiflage.  I completely forgot that I needed to e-mail the article I finished writing at 1 a.m. to the Enterprise.

I went off to the store and bought goodies for Ashley and then came home to call Omsoft Technical help.  I ended up practically in tears and pulling the "old age" card by wailing "Look.  I'm 72 years old and I just can't follow what you're saying," as he tossed question after question to me that I couldn't answer.

Ultimately, he agreed to send someone out to fix the router, if Ashley will let him know when it's convenient for her.  In the meantime, Walt managed to connect the modem to the computer so at least my desktop has internet access and I could upload Airy Persiflage and send my article to the newspaper.

I wrote a long note to Ashley telling her about certain things and then discovered that when Steve set up the new computer, he set the printer to be wireless, which means I can print from any wireless device, but I can't print if there is no wifi.  So I left the note on the computer screen and left Ashley a note to check the screen to read it!

There was still the house to be cleaned.  Walt was working like a champ, gathering mountains of dog hair and dustbunnies, changing the linens on the guest bed and anything else that needed to be done.  I found the kitchen table under all the stuff piled on it, folded some laundry and did a little cleaning in the guest bathroom.  I also packed my suitcase and got ready to leave.

We finally got on the road at 1 p.m. and picked Jeri up at Atria.  The plan was to drive down I-5 and then cut over to 101 using Hwy 37 (the highway on which James Dean was killed--there is a small memorial to him there), which, in previous years, has presented a glorious display of wildflowers in wet years.  Someone had posted a photo on Facebook of an unbelievable field of poppies which looked like it was in the area I was thinking of.

Jeri had mentioned wanting to try 5 Guys for burgers for lunch and there are several locations along 101, but only two along I-5.  We tried our GPS to find the first one and though it got the address right, it led us to a cul de sac of private homes instead of a fast food joint.  We gave up and headed for the next one, which ended up being about 15-20 miles out of our way.  Jeri decided that since it was now about 3 p.m. and we still had about 6 hours of driving ahead of us, 5 Guys was not a priority.

We found a Carl's Junior, and as we pulled into the parking lot, I was checking my "boycott" list of businesses run by the Koch Brothers.  Carl's Junior was one of them, but at that point I decided I just didn't care.  I would give them my business.  But just this once.  (It was heartening, though, to see that of all the fast food joints in this particular area, this was the one with almost no customers)

When I returned from a trip to the ladies' room, Walt and Jeri looked so cute, I had to take their photo. 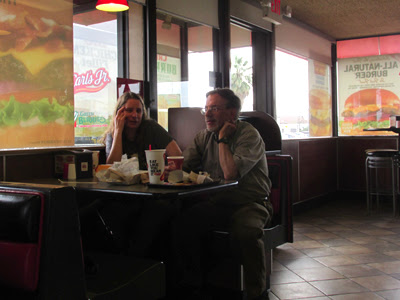 Just 90 miles until we turned off onto Hwy 37.  I got my camera ready.  It is an hour from I-5 to 101 and the wildflower place is about halfway, so I waited patiently.  And waited.  And waited.  There were no wildflowers.  Well, that's not true.  Jeri saw ONE poppy, but the colorful fields I had hoped to see were nothing but brown grass.  Such a disappointment.

But we continued our way down 101 to Santa Barbara and it was so good to get here finally.  Jeri got a chance to show Alice Nan and Joe the photos on her iPad from her record-shattering Boston winter. 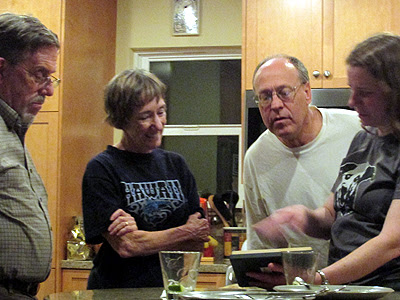 And there is wifi here, so I don't have to deal with anything technological for two days.  In the morning we are going to watch Brianna play softball, which I know will be fun.

I hope my bald head doesn't scare the kids!
Posted by Bev Sykes at 1:26 AM

I'm sure the girls will love your new "look". It's great.