Well, lord knows when this will be posted.  My server did an upgrade that is going to make things faster and cheaper.  There's only one thing wrong:  I now have no internet connection at all.

They planned it really well.  They sent out a notice when it was to be done and that it would be finished by the end of March 19.  They sent a telephone number to call if I had problems.  When I got home from Logos at 6 p.m., it didn't work (we had been without internet all day).  I called and was told that it was guaranteed to be fixed by 8 p.m.  I asked if I would be able to call them if there were problems after 8 and was told that no, they were closing their office at 8.

So 8 came and went, and there is no internet.  I know it's probably a simple fix but...the office is closed, so I can't get it fixed.

But I have to get it fixed in the morning because Ashley and her husband are moving in tomorrow when we go to Santa Barbara and I don't want to leave her without wifi.  I am started to feel very technologically defeated.

BUT, it was Logos day, so I spent the day unable to worry about it.  As days go, it wasn't all that busy, but there were some nice interactions.

When I got there, my friend Peg was there waiting for me.  She was the one who used to live at Atria and then moved to a new place on the other side of town.  We had a really good visit about all sorts of things...and she got to feel my fuzzy head.  While we were talking a woman from Montana joined us.  She was also "of an age" and could identify with the themes we were discussing.  She ended up buying two books of plays and one of short stories.

Peg had to leave quickly when the bus she had called for arrived to pick her up, but it sure was nice to have time with her again.

A woman bought a book of Emily Dickenson poems and a student bought a bargain book.  A few folks were in the store when Bruce came in.  All in white, as usual, but dingy this time, as if they needed cleaning.  He had a low slung white sweatshirt around his hips and had made a new hat for himself.  He didn't say hello this time though and he didn't buy anything.

Customers came and went.  A guy brought in some books to donate, carrying them in an Olaf (from Frozen) bag, but had to unload them because he didn't want to give up his bag.  A guy who looked like any of the thugs that Wallace Beery played in the 40s came in.  You'd expect him to buy a book on monster trucks or guns or something, but he bought "The Alchemist" and "The Bridges of Madison County."  Don't judge a book...or a person...by its cover!

A woman came looking for a book titled "Guns, Germs and Steel," which we did not have, but it sounded like an intriguing title.  I'd look it up but, you know, I have no wifi.

The guy who runs one of the newer theaters in town came in and asked if he could post a notice about auditioning for their next show.  He didn't recognize bald me but I told him who I was and we had a rather long conversation about his problems with the facility they had been using, his frustration trying to find another place to perform (and, more important, to rehearse) and the history of theater in Davis.  He is such an intense, dedicated guy and looks so terribly defeated by the brick walls he has continued to run into.  I hope he sticks with it because his theater fills a theatrical niche not otherwise filled in Davis and I would love to see it grow.

An old guy wearing shorts, sandals with white socks, with "white monk's hair" (imagine a monk's haircut in white and wispy and you get the picture).  He had a camera slung around his neck, so I assumed he was not a local.  He asked if I was the owner and I explained I was a volunteer, which shocked him. I told him about the policy of the store, donating to charity and that all of us who worked there were volunteers. He said that he "loved to meander around book stores" and asked where our books come from.  Then he meandered and as he passed by my desk, I could tell he smelled of baby powder.  Ultimately he left without buying anything, but said he would return.

My friend showed up at 5.  He told me he was kind of rushed, but that he had come to see my new hairdo.  He found a book by the publishing company he collects (Tuttle Books) and when I asked him how he happened to start collecting those books, he pulled up a chair and sat down and we had a nice visit about books, collections, and other stuff.  We've never really had a visit before.

After he left, I noticed that the radio station which plays in the background was playing one of my favorite classical pieces, based on "La Chi Darem la Mano," (I think that's right, but won't know until I get...you know...internet access!!)

Jeri is having breakfast with my mother in the morning before we take off for Santa Barbara.  I just remembered that Atria has wifi.  Maybe I'll go there and post this then.... 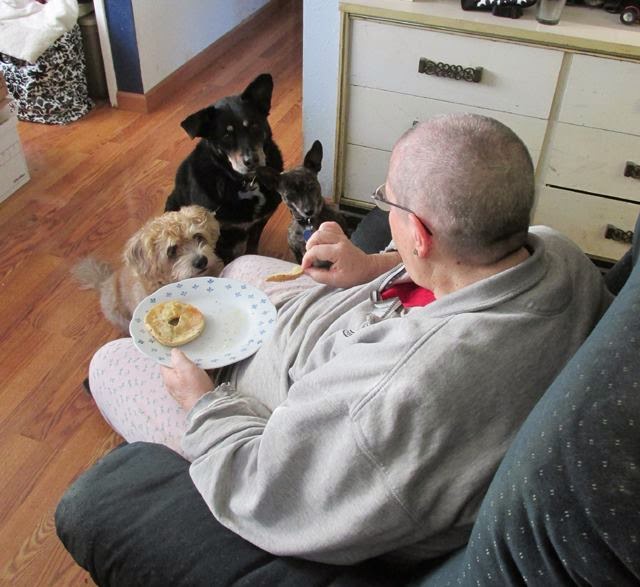 Guns, Germs, and Steel by Jared Diamond is a great read. I know you’ll like it. Interesting take on why different cultures flourished - or didn’t.