Every time I see my mother, she tells me that it's an unusual day because she woke up feeling like she should be doing something, but she doesn't know what and so her day is just off somewhat.  She doesn't realize that every day for her is like that.  She thinks it's just occasionally.

But I understand.  That's how I've been feeling ever since the desktop broke down.  My life may be chaos, but in my own weird way, my chaos is organized.  When the desktop moved to the guru's and I had to use the laptop it was disorienting enough, but when the new computer arrived and I had to move all of my chaos off of my desk and into either a box or onto the kitchen table, it just increased the agita.  ("Agita" can mean either heartburn or mental aggravation...and so I mean it in both of its definitions!).

For one thing, the desktop, though I am completely happy with it, is missing stuff that I need and either can't duplicate or can't recreate.  That will come, eventually.

But I can't just drop all this crap back willy-nilly onto my desk again.  I want to make an attempt to put it in some sort of understandable jumble of chaos.

So the first thing I've been doing is to try to get caught up on mail for the Compassion kids.  I got so incredibly behind while I was in Iowa and I never will get that stack organized.  I'll just file them away.  But there are lots of letters which arrived while I didn't have access to my printer and I'm trying to get those answered.

Today I also got updated photos of two of the kids. 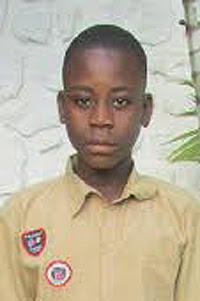 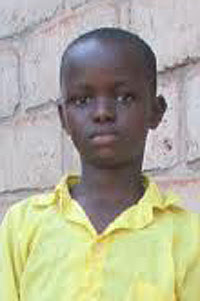 Lovson, on the left, is a young man from Haiti.  He's one of my best writers and usually writes something interesting that isn't a repeat of everything he said the month before.

Divine, on the right is from Rwanda.  She was a child I chose after seeing Hotel Rwanda and felt so terrible about the slaughter of people in that country...another genocide that we did nothing to prevent.

I wrote to both of them to let them know how happy I was to get updated photos of them and got another couple of long letters written to two of my older kids.

In the middle of catching up on mail, I took my mother to Kaiser to get a TB test.  She never did understand, despite countless explanations, where she was going or what she was going to do.  But it went all right and we return on Friday to have the test read.

After the TB test, I decided we should go out to lunch, so we went to IHOP, which is next door to Kaiser and has a parking lot.  I had forgotten that this was the first Monday of the month and was the day when a lot of the retirees from Walt's office meet for lunch.  Walt wasn't there when we arrived, but one of his co-workers that I know was (Walt arrived later). 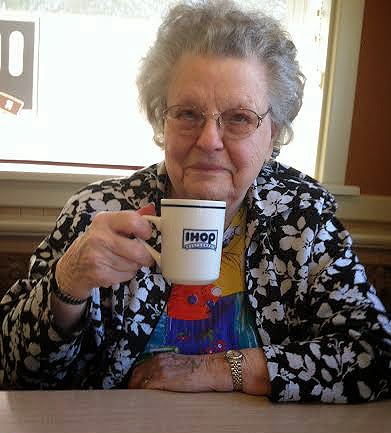 The retirees sat at a table for 12 while my mother and I sat at a booth nearby.  I was glad that the retirees were there because it gave us a new topic of conversation.  "Is that YOUR group?" "Don't you want to sit with them?" "Do they come here every day?" and variations on those questions repeated over and over and over again throughout the entire lunch.  But it was fun to have something new to repeat.


I had done her laundry last night and brought it to her this morning, but there was no parking at or near Atria, so I left it in the car while we were driving around.  When we came back, I took a cloth bag that was in the car and put her laundry (it was nothing but underwear) in it, figuring the bag was small and lightweight and should not be a problem for her to carry.

Except she couldn't figure out what the bag was.  Every time I told her it was her underwear, she was first grateful because she was out and wondered how I had known that, and then she would look again and ask if I was sure it wasn't my underwear.  The last time we chatted about the laundry was as she was getting out of the car and asked me what was in the bag,  When I told her it was her laundry, she said "Well...if you say so..."  I am not convinced that the bag made it to her apartment, but I'll find out when she either calls me to ask where all of her underwear is because she's out, or when I see her on Friday for her TB test re-check.
Dear thing, she is exhausting, but I'm getting much better at coping with her emotionally.
Posted by Bev Sykes at 12:37 AM

Email ThisBlogThis!Share to TwitterShare to FacebookShare to Pinterest
Labels: Compassion, ihop, My Mother