I remember distinctly the first time I took a snapshot that didn't have people in it.  I was in grammar school and had just received my Brownie box camera for Christmas and was determined to "make memories" with it.  I was the babysitter for a neighborhood family, who decided to bring me along on their vacation to Lake Tahoe so I could take care of the two kids while they went out to the casinos.

It was an afternoon when I guess we were going to take the kids down to the lake and the father, the kids and I (with my camera...even then it was my constant companion!) were walking down a hill in back of the cabin they had rented.  The hill was covered with rocks.  I looked behind me and I can still remember that there was just something about those rocks, the way they were lying, the way the light was hitting them, the shadows on the ground...something.

I stopped to take a picture and the Dad made fun of me for taking a picture of a bunch of rocks.  I couldn't explain to him why they had struck me as something beautiful that I had to photograph.  Of course it was only a box camera and when the photo came back from the developer it looked just like a pile of rocks, not the beautiful thing my mind had seen.  But it was the start of my love of photography.

The other day someone on Facebook posted some photos of wildflowers he had seen about a half hour's drive from here.  I am a sucker for the purple lupine and orange poppies that bloom on California hills in years with sufficient rainfall.  Knowing how much she loves nature, I wanted to take my mother to see them.
I very nearly did NOT take her.  When we went to pick her up, she was not in her apartment, so I went to check the dining room, where she was just finishing her lunch.  I walked up to her table and when she saw me she jumped back and got that "you've just stuck dog poo in my face" look again.  She told the two women that she didn't know me and didn't want to know me and didn't I look disgusting.

That just hit me wrong (I'm obviously too sensitive) and I got angry with her.  She got her feelings hurt and one of her luncheon companions calmed me down and told me about when her son had donated his long hair to a group that made wigs for cancer patients.  She told me I was doing a beautiful thing. I wish my mother would tell me that.

My mother never said anything about how disgusting I look again, but I don't care if she does have dementia, if she continues to act like I've thrown dog feces at her every time she looks at me, I just won't go see her for awhile.  I'll send Walt to deliver her meds.  It bothers me that of all the good qualities I have admired about her through the years, the only one that seems to be sticking with her dementia is her vanity, which I have found her least desirable quality!

But this isn't about that, it's about wild flowers.

We drove out through the town of Winters went into the hills.  I was hoping that we weren't too late but then all of a sudden we were in the thick of it. 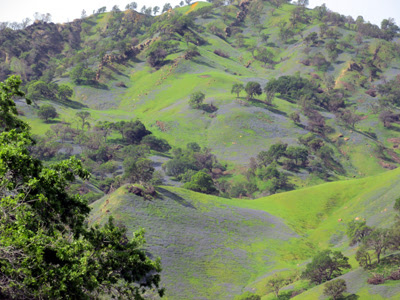 Everywhere we looked the hills were carpeted in purple lupine.  If you look carefully at the top in about the middle of the photo you will see a bright patch of orange poppies.

The purple carpet kept rolling along and then suddenly there was a carpet of poppies blanketing the hill. 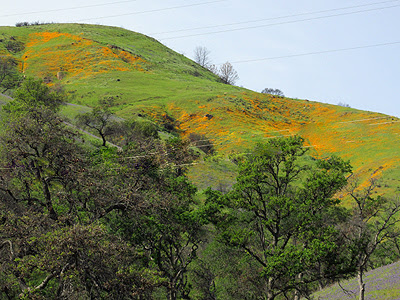 It almost hurt the eyes, it was so beautiful.  We found a place to pull over where I could get some photos and I loved this patch of the two mixed together. 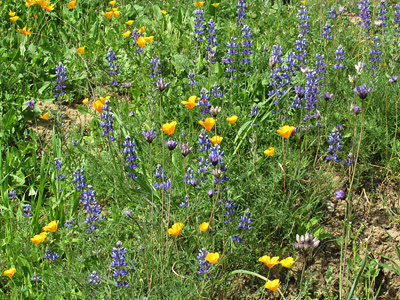 I think my mother enjoyed the ride.  She did seem to like the flowers, but enjoyed the greenery more.  But we eventually drove home and dropped her off.  I told her I would be by tomorrow to bring her meds.  I think she may still have been smarting from my brief outburst at lunch because she was very quiet.  THAT she'll remember.  What she ordered for lunch or the names of her great grandchildren, she doesn't.

But I had a great time and loved looking at all that beauty, which lasts for such a brief time that I always feel very lucky when I am able to catch it.

Email ThisBlogThis!Share to TwitterShare to FacebookShare to Pinterest
Labels: My Mother, wildflowers