This head shaving for St. Baldrick has taken on a life of its own.  As I have said, I signed up, hoping to raise $500, which I did in the first couple of days, so I raised the goal several times, the final time to $2,000.  That amount has been reached as of today, with a $50 contribution made by a wonderful woman named Connie Dees, bringing the total to $2,033.

Connie decided I should aim for $3,000, which I think is waaay beyond what I can possibly generate, but she has issued a "challenge grant," like they do on all those PBS fund raisers.

Wow.  So the gauntlet has been tossed. There are 10 days before we get shaved.  If you've been sitting back, thinking about donating, but haven't yet done it here's your chance to not quite make a matching grant donation, but to add $10 or $25 to the amount of your donation.

I am eternally grateful to Connie!! 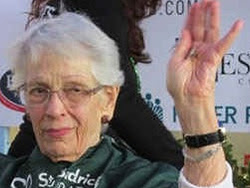 And if you'd rather put your money elsewhere, my friend Nancianne is also having her head shaved.  This is her fourth year to participate and it is she who was the one that inspired me to join the fun this year.

Her money goals are more modest than mine.  She hopes to raise $250 and is only $25 from reaching her goal.  If you'd like to help her reach (or maybe even exceed) her goal, you can donate on her St. Baldrick's page.  She's about to turn 80 and what a lovely birthday gift that would be for her.

Today passed by so quickly that it was 5 p.m. before I even noticed.  Part of it was taking a nap after having some lunch.  My plan had been to go to Atria and pick up laundry, but I never got there.

I'm continuing to work on configuring the computer.  I was thrilled that my copy of Front Page, the program I use to create Funny the World arrived.  Sadly, it can't be loaded onto Windows 8.  I contacted the seller and I can return it for a refund, so that's OK, but that now leaves me without a program to create this journal.

I heard from someone about another problem and I asked him if he had any suggestions.  He suggested a program called Visual Site Designer, which seems very simple and easy to use.  I can use a trial copy and then buy it if I like it.  In the meantime, I continue writing FTW on the laptop (which, oddly enough, has stopped glitching every time I touch it, making it MUCH more pleasant to work with).

My guru tells me he will try to unlock the copy of PhotoShop he loaded onto the new computer, but in the meantime as long as I'm using the laptop for Funny the World, I can also continue to use it for graphics.  Not ideal, but I'm thinking of it as a stop-gap measure.  I'm sure that sooner or later I will either work it all out .... or find a good work-around.

I'm not the only one with problems, though.  Early in the day I received a message from The Enterprise entertainment editor saying that someone had erased all of her files that held anything upcoming that she had scheduled for posting on specific dates, so could we all re-submit our dates.

I gave her my dates up until April and then submitted my review for Julius Caesar, which I finished this morning,.

This evening I picked up an e-mail she had written around 4 p.m. asking where my review was because it hadn't arrived yet.  Fortunately there was a second e-mail saying she'd found it and that it had been sent to her junk file.  (I know I'm no Shakespeare scholar, but junk file???)

I also got letters written to Brianna and Lacie and made special treats to include for them.  We are looking forward to seeing Brianna's new softball play...and Brianna make her musical debut playing the bass guitar later this month.
Posted by Bev Sykes at 12:49 AM

Email ThisBlogThis!Share to TwitterShare to FacebookShare to Pinterest
Labels: computer

I know you hate hats, but will you be needing one after the head-shaving? I have several that I've knitted - lots of sizes and colors. Would you like me to send you one?

Oh, Mary, that would be wonderful. I've started thinking about getting a knit cap. I would probably need your largest size (since often "one size fits all" doesn't). Thank you so much for the offer!

(My mother, in particular, who does not want to see me bald, would appreciate it!)

I'll send several - see if you can find one (or more)that works for you, and find homes for any others.