People who read Funny the World may not be familiar with Harriet Vachss Harris who used the nom de plume "l'empress" for her journal, A Place of My Own, and for writing comments on blogs, but for those who read these entries on my mirror blog, Airy Persiflage, her name will be familiar, as she frequently commented on entries there.  In fact she was almost the only one who ever commented there. 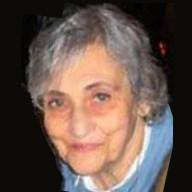 Harriet lost her battle with lymphoma yesterday.  Always cautious about revealing too much about her personal life, we knew that she had battled cancer, but did not know that she had recently been given "six months, if you're lucky."  Sadly, she was not lucky.

She was such a loyal commenter, always one to hold my feet to the fire in the way that the late Jim Lawrence used to do that when I noticed in February that she had not commented on anything in a long while, nor had she updated her own blog, which she usually updated several times a week, I dropped a note to her daughter, who is on Facebook.

"It hurts my heart every time I have to type this," she wrote, "but my mom's time is more finite than most. We're going to offer her one more option but her steady response is that she simply cannot undergo treatment."

Even then I didn't understand that she was in the hospital.  Her daughter talked about her returning to the assisted living home where she had recently moved and where she seemed to incredibly happy to finally really have "a place of her own."

But that was not to be.  In short order she was in a nursing home and it was clear that the family was on a death watch. People all over the internet sent messages of love and support to her daughter, who spent Harriet's last days reading them to her.  In fact, she was reading them to her shortly before she died.

"I have said since the beginning that you and my mom are so alike that I feel you're more like her than her sister is," her daughter wrote to me.  Harriet and I never really had much in the way of direct exchanges.  Mostly our interactions were comments made on each other's blogs or comments that we both made on That's My Answer each day and we did seem to have an awful lot of things in common.

Harriet had a hard life.  She lived in a house with her daughter and son-in-law.  Her husband had been moved to a nursing home awhile ago.  I never could figure out what his mental state was and whether he had dementia along with his many physical problems, but it was clear that she was devoted to him and just had reached the point where it was physically impossible for her to care for him any longer.  And she wanted desperately to move into her own place, when she could afford it.  I gathered things were cramped in the place she always called "the cracker box."

I know it didn't help when the basement flooded a few years ago.

But she is finally at peace.  She was not a good friend, but she was a presence nearly every day and I will miss her.  I suspect that if we had been neighbors, we might have become good friends.
Posted by Bev Sykes at 12:00 AM

What a lovely tribute to Harriet, she was a daily presence in a lot of our lives. She will be missed.

Harriet was my internet friend. I wish I had met her in person. I missed her comments. They just stopped in January.

Thank you for letting everyone know what happen.
Rest in peace, Harriet.