I said my goodbyes to Sandy this morning.  She and her wife are off to Vietnam, Cambodia and Nepal for a fabulous vacation and she won't be around Logos for several weeks.  She has me on her e-mail list and if she is able to, will be writing travel reports as they move from place to place.

Today was an up and down day at the store, long periods of inactivity interspersed with busy periods and overall, a fairly good day income-wise.  My first customers were a middle-aged couple.  He was wearing a Lovecraft shirt with lots of writing on it and I wanted to see what it said, but wasn't able to.  She bought a book on rubber stamps that I would like to have looked through.  Rubber stamps intrigue and mystify me.  People make such beautiful things with them.  I just stamp in one color and that's it.

Then came a guy looking for Stephen King books.  We only had one, "The Stand," and that wasn't what he was looking for. I've just started watching The Stand  mini series after listening to Rob Lowe talking about it in his book and checked the book out after the guy left, but I never was able to get into that book and the sheer size of it put me off yet again.

I did choose my book to read for that day, though -- another Ruth Rendell mystery.  We have quite a lot of them at present and they aren't exactly selling like hotcakes.  They are an easy read while in the store. 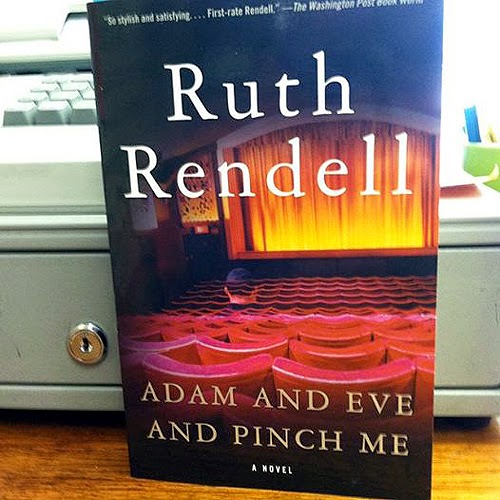 A striking woman came in next.  She was pencil thin, with long blonde hair under a baseball cap, skinny jeans, and a purple sweater with a pattern of snow-covered trees growing up out of grass.  She had a very thin nose and wore wire rimmed glasses.  She was followed by a stocky grey-haired guy wearing a baseball cap covered in pins.  They both looked around for quite a while and it was only as they were leaving that I realized they were together.  He bought a puzzle, a book called "This is Your Brain on Music--the Science of a Human Obsession" and a book about the history of word meanings--another book I would like to have looked through.

Another couple arrived.  She wore a black and white striped sailor shirt and she sat in a chair and stared out the window while he looked at books.  They left without buying anything.

A young Asian guy came in looking for a book that he thought was named "Flight." "It's a kind of a novel," he said, but he didn't know the author.  I directed him to contemporary fiction and while he was looking, I looked the book up on Amazon and then told him the name of the author.  He asked if he could see the front of that book and then told me it wasn't that book because he knew the book had a white cover.  The book I found sounded like either science fiction or young adult fiction and I asked him what the book was about.  He said he didn't know, but he did know that it had a white cover.  He finally left and came back with a picture of the book, which was, indeed, the book I had found on Amazon, with a different cover.  But we didn't have it anyway, and I referred him to the Avid Reader, which sells new books, not used, and thought he might have better luck there.

A tall woman with long dark hair, a floppy hat and sunglasses came in looking for Machiavelli's "The Prince."  She seemed to know the store quite well and when she didn't find the book, she said she'd come back another day looking for it.

A woman and a guy who was probably her son came in.  She was looking for books on culture and etiquette.  That stumped me.  I wasn't quite sure where to look for that, but referred her to the Personal Growth section. She took a chair and set it up in front of the bookcase so she could look through the books.  She didn't find what she was looking for, but did buy "Tuesdays with Morrie," after first asking me if the inscription in the front of one of the two copies was by the author.  when I told her it appeared to be just a note from someone who had gifted it to someone else, she bought the copy without the inscription.

A woman named AnneMarie brought in a box of donations.  She and her husband are downsizing and she hates to give away "her friends" (the books), some of which she moved out here from Massachusetts, but knows they have to reduce their apparently large collection of books to the special ones that will just fit into one bookshelf.  She says she will be back with more books, which will be more special as she continues to cull her collection.

She was followed by a guy who has lots of Spanish language book to donate and wants to know if we can use them.  He checked out our current shelf of Spanish books.

A curly-headed guy with a nice smile, but bad teeth, dressed all in black, started at the music section and then kind of disappeared in the store for a long while until suddenly he raced out of the back, looking at his watch, threw me a nice smile and ran out the door.

My friend came in at 4:30 and picked up a thick, decorative book of "Peter Pan."  As he usually does, he asked me what I was reading and I told him about Ruth Rendell and how much I enjoy her books.  He decided to try one, so bought one of her books too, one I had already read.

Next customer was a volunteer named John.  He bougtht 3 books, but didn't hand them to me.  Rather, he told me the genre of each, and read me the price and when I rang him up on the credit machine, he leaned over me to press the button to give him a copy of the transaction.  He seemed like a nice guy, but a bit pushy!

An young guy with surprisingly old looking hands bought "The Country Diary of an Edwardian Lady," which seemed an odd choice for him, but maybe it was a gift.

Two giggily girls bought "Morals and Manners for New Zealanders" (too bad I hadn't seen that--I could have recommended it to the lady looking for culture and etiquette).  They paid and started to leave, but stopped and looked through the "old books" section and ended up buying a very old Physics textbook.

The last customer to come in was "Eliza," whom I had not seen in awhile.  She and her companion stood and read everything on the front table and left without looking at any books.

Peter relieved me tonight, so I didn't get a chance to tell Susan about my lunch with Char yesterday.  I had barely made a dent in my Rendell book, so brought it home to finish.
Posted by Bev Sykes at 6:42 AM