A "Different" Day at Logos

When I arrived at the store, Peter apologized that he had no time to chat because Susan was waiting outside in the car for him.  He said he hoped that my afternoon went better than his morning, which was pretty slow.
My shift started out with a woman who bought a Civil War history and one of C.S Lewis' religious-themed books.  She was followed by a guy wearing headphones who browsed in Science Fiction and foreign languages, but left without buying.

My next customers were a delightful older couple from upstate New York, in the Finger Lakes district, who came in, really, to ask directions to the Varsity Theater (in the next block) because she had left her camera there and she was hoping they'd found it.  But, like me, they are suckers for a book shop and had to browse.  She and I got to talking and I told her that Walt and I had been in their area several years ago and what a nice place we thought it was.  They said they had come to California before the blizzard and their daughter told them to stay here until things calmed down because it was "awful" there.

The woman was British and her husband American.  He was an interesting looking man, short, walking with a fancy cane, and wearing a bright emerald green sweater and sporting a royal blue cap on his head.  He looked like a slightly too tall leprechaun.

She told me that coming to California from upstate New York was like coming to a different country and she was surprised they didn't need passports to get in.

Before they left, she bought two children's books for her 7 year old granddaughter, one about a little girl's adventures in snow, which she thought would be appropriate.

While she was rummaging about in the children's room, a guy and his young son came in and joined her.  They bought two books, one a book on American poems for children, which the son didn't seem nearly as excited about as his story book about pumpkins.

A guy with the first name of "Homayoon" and a longer, more unpronounceable last name, bought 2 books from the bargain table and a thick tome on the Dictionary of Film.

Then Jim came in with his two daughters.  Jim is a guy who went to UC Davis in the 1980s and became a big fan of Lawsuit.  Somehow he found my name and wrote to me that he had moved away from Davis for several years, had married and had two children and that he had now moved back.  He wanted to tell me (a) how important Lawsuit had been in his life and (b) to let me know that he had a recording they made of an interview on KDVS, the campus radio station, in about 1988.  (He also confessed today that he had a "little crush" on Jeri at the time)

We also discovered, in one of those small world events, that he and his wife had lived for three years in San Rafael, next door to my mother's step-son, Ed!

So Jim had come in to bring me a copy of the CD he made of Lawsuit and we chatted while his daughters were looking for books.  While we chatted, an older guy, who always brings math books in for Peter, came in and they got to talking because the guy also moved away from Davis and then moved back.  They discovered that both of them, at quite long intervals of time, had Peter as a professor.

The guy left and I continued talking to Jim and then, for some reason, I happened to glance at the bookcase facing me and gasped.  There, on display, was Volume 1 of the Lamplighters history!  I couldn't believe it.  Whoda thunk one of my books would be for sale at Logos???  I immediately took a picture and texted it to Walt, Char, and my kids. 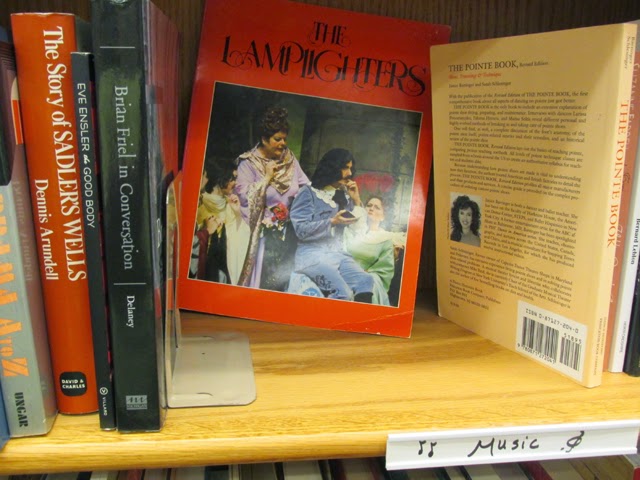 Jim left and a wide eyed girl came out from the book stacks to ask if I was an author.  Nobody had ever asked me that before, but I guess I am...or was...so I told her yes.  She was impressed.

I groaned when the obnoxious woman who wanted to fix my eyesight several weeks ago came in.  Last time she came in she stayed and stayed and stayed and was so annoying, I was almost rude to her.  But apparently I was not the only person she had bothered and Susan had talked with her about it (she's also a volunteer at Logos) and so today after starting a conversation that caused me to cringe, thinking it was going to go on and on and on again, she just browsed the bookshelves and then left.  But first she asked me if I had written any reviews lately.  I told her about the review that had appeared a couple of nights ago.  She asked how she could see it.  I told her where in the paper they appeared and she asked if it was on line, I said it was, and she headed off, presumably to look for my review.

A girl brought a Ayn Rand book to the desk, and then discovered she had left her wallet at home, so had to put it back on the shelf.

"My friend" arrived at 4:45.  He had read the Ruth Rendell book I recommended last week and enjoyed it, so he got another one.  I told him about how shocked I was to find the Lamplighters history on the book shelf and showed it to him.  He bought it and asked for an autograph.  I said "Well, then, I'll have to know your name," which he told me was "Willard."  That would definitely not have been my guess.  But now "my friend" has a name, which is nice...and he also owns a Lamplighter history.

A girl said she wanted to "get back into reading" and wondered if I had any suggestions.  I kind of hemmed and hawed and suggested a couple and then pulled out "Outlander," the first of Diana Gabaldon's 8 book series and hesitatingly (because of its length) recommended it to her.  Turns out she had seen the start of the STARZ series on TV so decided she'd give it a try.

I was really on a roll today!

Susan arrived early and we chatted a bit.  She told me that we are having dinner together on Saturday.  Cindy, my dentist, and Roberta, our mutual friend, have taken a course in Mexican cooking and wanted to cook a dinner.  Turns out Susan doesn't know Cindy, but is also a good friend of Roberta, who invited Susan and Peter to come to dinner.

This was, all things considered, really a "small world" sort of day!

I was having stomach pains all afternoon...not "inside" pains, but more abdominal muscle pain, which I assume is the result of three or four weeks of coughing, but by the time I left Logos, it was so bad I wasn't sure I could walk 3 blocks to the car, so I asked Walt is he could get the car and then drive up to get me.  When I got home and took some aspirin and got into my recliner, I felt better, but only had a small amount of dinner and decided to go to sleep halfway through The Blacklist, at 9:30.  I woke up at 1:30 and now, at a little after 4, I am going back to the couch to see if I can get a couple more hours of sleep.
Posted by Bev Sykes at 12:03 PM

Bev, I have been enjoying your blog for several years now although I seldom post. I seem to be having a problem with the "Funny the World" blog. Nothing has posted since Feb 11th. I don't know if it is my problen or yours but I thought I would mention it just in case the problem is on your end.