I Hate My Body

Walt and I don't have much opportunity to gather socially with friends.  Mostly it's because we spend so much time going to theater that there is never time.

But we have had three opportunities in the past month+.  January 31 was Ashley's wedding at Lake Tahoe.  I had been looking forward to that wedding for six months.  I love Ashley and seeing her so happy brought a big smile to my face and I couldn't wait to see her married to David.

But I got my famous cold and the cough was constant and sounded terrible.  The last thing I wanted to do was to infect anyone at the wedding with my germs, so we stayed home.

Then Ernie and Lucille came to town.  They are two of my favorite people, Walt's cousin and his wife.  They usually make it out to California once a year and visit Ernie's brother in Long Beach, and Alice Nan in Santa Barbara and then come north to see Norm & Olivia and us.  Whichever cousins and grandchildren they can fit in along the way, so much the better

But as we were getting ready to drive to Norm's house to spend the day with the Sykes family, I was still sounding like a TB ward and sadly decided nobody really wanted to be around me with the constant cough.  So I sent Walt on ahead and he had a wonderful time.

Saturday, 2 days ago, we had an invitation to have dinner at my dentist Cindy's house (Cindy was a friend for about 10 years before she became my dentist).  She and our mutual friend Roberta had taken a course in Mexican cooking and wanted to share with us.  They also invited Susan and Peter from Logos.  Susan and Roberta had been colleagues and remain friends.

I was really looking forward to the dinner.  On Thursday, I developed a "thing."  I don't know what it was but as I worked at Logos, my whole abdominal wall started to get sore.  So sore, I didn't think I could walk the 3 blocks to the car, so Walt came and got me.  I spent Thursday night and Friday in the recliner with ibuprofen (suggested by Kaiser) at my side.

1 a.m. Saturday, I woke up pain free.  I was ecstatic.  My cough was gone, my pain was gone and I had a lovely dinner to look forward to.

In the afternoon, I was feeling the need for a nap, which is not unusual.  I nap most afternoons.  When I got up, I was feeling warm.  Not surprising, I thought, as I had been sleeping in a patch of sun, but when the feeling didn't go away, I thought "what the heck" and took my temperature.  I shouldn't have done that.  It was 100.1.  I went back to the recliner, popped more ibuprofen and hoped that maybe I was just still warm from the sun.

But the fever went UP, to 100.3.  Not a bad fever, but nonetheless, not a healthy temperature.  I called Cindy to get a doctor's opinion and she told me to stay home.  Walt went.  I stayed home and felt sorry for myself.  He did bring me a doggie bag and the dinner was delicious (though my stomach hasn't been up to eating much these days), but I missed all the fun stuff.

But I was well enough to get to the B Street Theater today to review a show there.  Not the greatest show, but one of stories from the Hispanic culture for children.  The kids loved it.  I have to figure out how to write a review.  I would rather have gone to Cindy's.

But I was home for the Oscar telecast.  I love Neil Patrick Harris and thought he did a good job of keeping things rolling, but there seemed to be more tech awards than in recent years and it seemed to take a long time to get to the awards everyone was watching to see (except the families of the tech people). (I did like it that they didn't seem to play people off and let them finish their thank yous this year)

I thought Lupita Nyong'o in that pearl studded dress was stunning, and Jennifer Lopez looked like she was walking on a cloud when she came out in her billowing skirt.

And why doesn't someone let Patricia Arquette know that she needs a comb?  I can't believe she thinks that hairdo looks good. 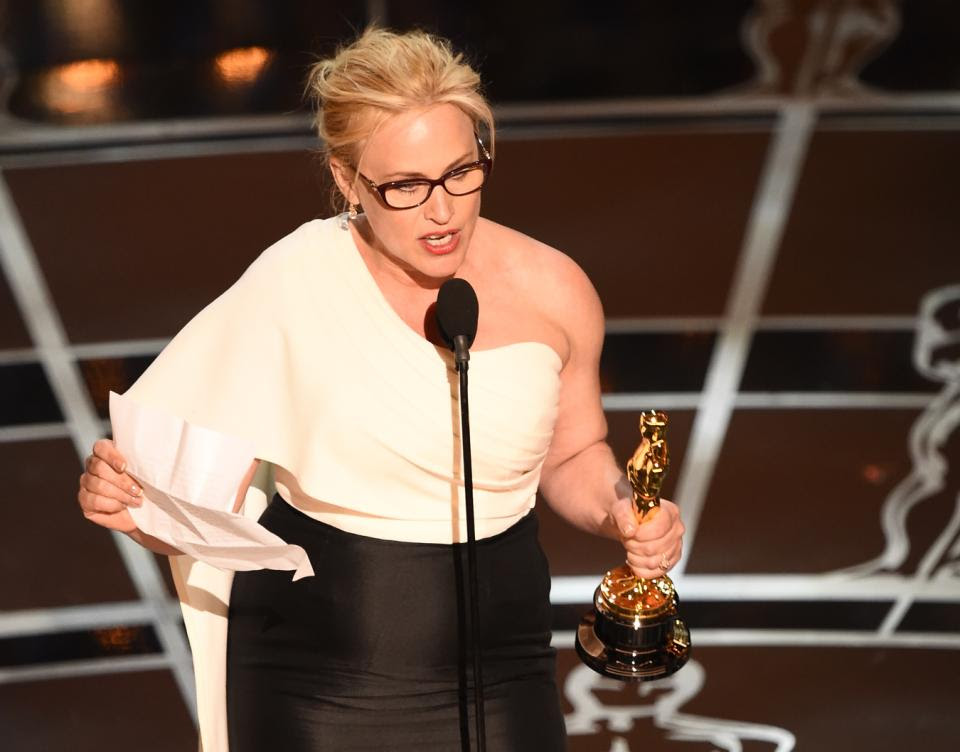 But she made a wonderful speech about equal pay for women.  Juliana Moore used her acceptance speech to discuss Alzheimers, while Eddie Redmayne put in a plug for ALS and director Alejandro Inarritu hoped that Mexicans in this country, legally or not, would be given respect.

The obviously gay Graham Moore, who won for best screenplay for The Imitation Game talked about not belonging when he was a kid and that he nearly committed suicide and he tried to tell kids to look at how far he has come and to hang in there...that it will get better.  And J.K. Simmons told everyone to call their parents.

John Legend, winning the award for best song, "Glory," for Selma talked about this being "the most incarcerated country in the world" and how there are now more black men in prison than there were under slavery in 1850.

The winners of the documentary Citizenfour thanked Edward Snowden, while the president of the academy referenced terrorist activity and said that the academy had the responsibility to ensure that no one's voice is silenced by threats."

This may have been the most political Oscar telecast I'd seen since Sacheen Littlefeather rejected the Oscar for Marlon Brando.  But it's always fun.
Posted by Bev Sykes at 12:40 AM

I didn't watch the show (as usual - since I'm not a fan of awards shows), but I did happen to turn it on just as Lady Gaga started her number. Wow! I didn't know the Lady had such an incredible voice. All was great until she spread her arms and showed the tattoos on her inner upper arms. What an "ick" factor (at least for me). I do love J.K.Simmons, though, and am glad he won.