I think Lester is getting tired of snow!  She looks like a lost dog here. 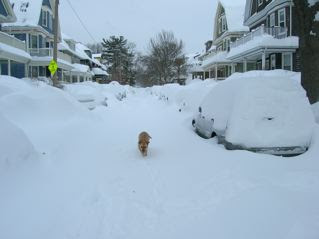 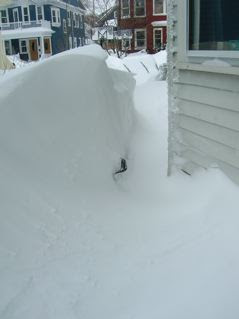 Jeri also sent a photo of her truck buried under the snow.  Look at how much snow is piled on top of the side mirror to the truck (or maybe this is her car...)

Walt said he felt like he should fly back there and help them shovel until I pointed out that this was the last thing a 75 year old man unaccustomed to shoveling snow should be doing!

Well, fortunately, we are not dealing with snow here in Davis, but "suffer" under an abundance of spring blossoms.  I feel so bad for all those still digging out.

As for us, here in the land of blue skies and lovely blossoms, we took my mother to the Citizens Who Care show, an hour and 45 minute salute to love, singing the songs of the 40s to the present.  It was quite different from the past 22 years of concerts, but I heard nothing but rave reviews afterwards.  Walt has worked so hard on this show and I'm so happy for him that it was a big success.  I don't know how my mother felt about it, but I'm glad she got out of Atria for a change.

I skipped the after party because I had been invited to "tea" at our friend Susan's house.  When she invited me for tea at 2, I told her I couldn't go because of the concert, but she was well aware of the concert and had set the tea time from 2 to 5, so that those of us who had been at the concert could still come.

I drove my mother back to Atria and then drove to Susan's, arriving at the same time as The Psychiatrist (remember him?) and his wife.

What a great collection of people.  Starting with Susan, Susie and Sue and then a lot of people I've known for 40 years in this town.  In addition to the psychiatrist there was a former state assemblywoman, a former mayor, the woman I decorated cakes for for awhile, a woman with whom I used to meet, along with our friend Joan, to complain about Bush during his administration, a woman I knew very well and recognize by sight, but don't remember where I know her or what her name is.  And then some folks I didn't know at all.

There was an amazing array of goodies on the table. 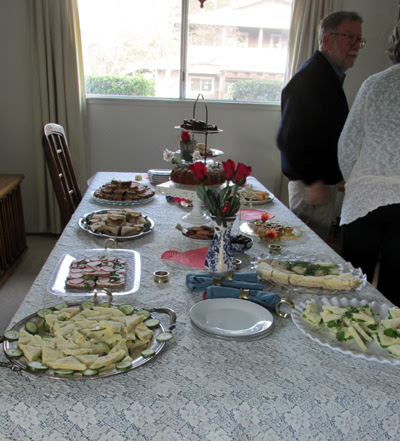 There was enough food left over that they insisted I take a plate home to Walt, who had been eating his own hors d'oeuvres at the concert after-party.

When it got down to the smaller group, we had such a good time reminiscing about old time Davis and stories from decades ago.

Then it was time to take a photo before we headed off to our respective homes. 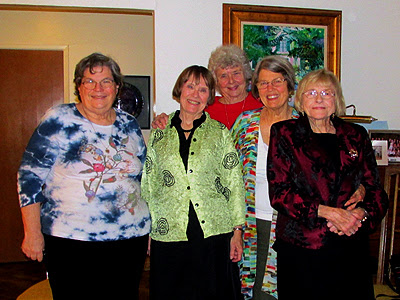 Susan, Susie and Sue, along with me and Judy

Susan tells me it's been 2001 since I was last at her house for coffee (she lives 3 blocks from me!) and we have decided we need to do it again soon.  But I sure came home feeling happy (and very full of good food!).  The whole event seemed to be an extension of the history of "Love" I had just left at the theater.
Posted by Bev Sykes at 12:00 AM