Atria requires its residents to have an annual physical exam, which is good because without the requirement, my mother would never go to the doctor.  But it has now been done...and we don't have to do that again for another year.

I called her in the morning to let her know she had an appointment and that I would pick her up at 2.  I arrived at 2, just as she was leaving her apartment.  I asked where she was going, she said she was going to lunch.  I reminded her of her appointment and of course she didn't know anything about it.
She asked if I'd had lunch yet and suggested we get lunch before we left.  I told her we had to leave right then.

So we got her purse and did the usual "where is my Kaiser card" rigmarole.  I was smart this time, though.  I noticed she was wearing a blouse with a pocket and I suggested she put the card in her pocket, so every time she went looking for it, I just reminded her it was in her pocket and that simplified things immensely.

On the drive to Kaiser and while in the waiting room she asked countless times what we were there for and would she have to remove her clothes.  She hates removing her clothes.  I told her I didn't see any other way the doctor could perform a physical exam, so she grumbled, but she did it.

The exam was pretty uneventful but the doctor wanted labs, so we went to the lab to get blood drawn.  She is just so totally clueless and unable to understand anything.

Some time ago, I came across a marvelous animation that explains what happens in the Alzheimers brain.  It has been "the" most helpful thing I have seen since this all started.  I find that when I get frustrated with her, I can visualize what is happening in her brain and it helps give me patience.

The whole day took maybe 3 hours and left me mentally exhausted, but it's done and all is well for another year.

Then it was time for my own appointment with my therapist, Debbie.  When you arrive for a therapy appointment, you first fill out a form, each time, which assesses how you have been feeling in the last two weeks.  Rating, on a scale of 1 to 3, things like "little interest or pleasure in doing things; feeling down, depressed or hopeless; feeling tired or having little energy; feeling bad about yourself; having trouble concentrating, etc.

My scores on these items is usually low, but today it was zero.  Debbie was very pleased to see that.  I told her that since starting the antidepressant, I really was feeling very good and in control, I had been regularly taking my medicines (which was one reason I started going to see her...to understand why I was resisting taking them), and that really everything was going well.

I had sent her a link to the Alzheimers video and we talked about how helpful it was and we discussed how I'm coping with my mother these days (another reason I felt I needed some help when I started seeing her)
In the end, she asked if I felt I needed another appointment and, in truth, I did not, but I told her I'd like to come one more time, to show her my bald head.  She thought that would be a good idea, but I think I only have one more session with her, which I'm sorry about because I enjoy her, but I don't really feel I need her any more.

I came home to clear off my desk. 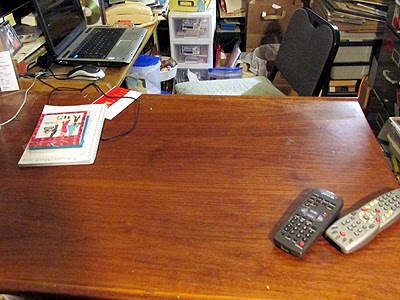 My new computer is coming today and I figure that by this time tomorrow, I will either be delighted or unable to get my head shaved because I will have pulled out all my hair myself trying to learn the new operating system and trying to get everything set up.

This laptop will not be put away, yet...I suspect I may still need it during the "settling in" process!
Posted by Bev Sykes at 7:13 AM

Thanks for the video. A friend's husband (age 72) has just been diagnosed. I'm going to send it to her.