All in all, 72 ain't so bad.  I had a nice, relaxing day, spent, for a good part, writing a review of a farce I had seen on Saturday, A Flea in her Ear.  It was very funny and I gave it a rave review, but I loved my closing paragraph, which few will "get."  Jeri did.  Walt didn't.  Do you?

So when all the world is a hopeless jumble and the raindrops tumble all around, leave your troubles outside and come to the Woodland Opera House for a good two hours of fun and laughter.

When I get devastatingly clever it's often just for my own fun...this was.  But I'm curious to see if anybody reading this knows what I mean.

Jeri called in the afternoon to wish me a happy birthday.  It was snowing while we talked.  We were accompanied by Lester barking in Boston and Sheila barking in Davis.  I also discovered something I had not known in all of this snow reporting.  Jeri is home alone; Phil has been in Arizona on a previously scheduled trip, so all this blizzard stuff and snow removal Jeri has been doing by herself (with help from her neighbors) while Phil sends her photos of blue skies and palm trees!  We both agreed he owes her big time!

At night, Ned and Marta took Walt and me to Joe's Crab Shack in Old Sacramento for dinner.  Was there ever a better place for me to have a birthday feast?

While Marta and I sipped our lemonade and water, Ned and Walt enjoyed a pint of Sam Adams and toasted Jeri and all the other poor residents of New England, still buried under mountains of snow. 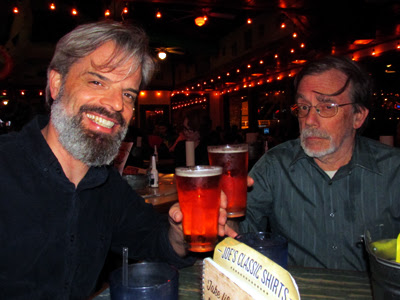 Walt and I each ordered one of the big pots of Dungeness crab and the waitress saw that we were suitably attired.

And then our crabs arrived.  Oh myyy. 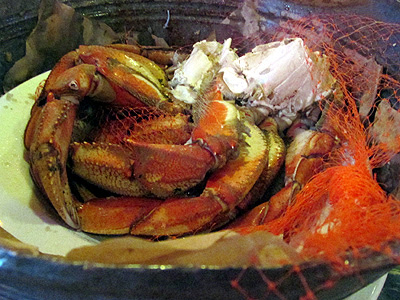 We definitely got our share of crab, though the promised hush puppies never arrived...but who needed them?
We had such a delightful evening and were so grateful to Ned and Marta for treating us. 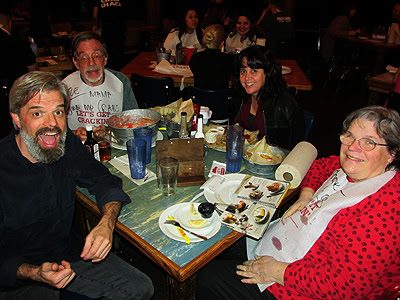 On the drive home, I was wondering if maybe I had too much crab, as I was feeling a little woozy, but once I was out of the moving car and settled in my recliner, things were fine and I fell asleep almost immediately, happily sated with memories of a lovely dinner and fun company.

There was a video waiting for me on my phone, of the girls singing happy birthday almost, sorta accompanied by Brianna on her new bass guitar.  Then a nice call from Tom to close out the day.
A very good way to turn 72.
Posted by Bev Sykes at 5:34 AM

Email ThisBlogThis!Share to TwitterShare to FacebookShare to Pinterest
Labels: birthday

I wish we had a Joe's Crab Shack so John could take me there for my birthday next month. Frequently we go to Bonefish Grill where we can get mussels, but no blue or Dungeness crabs. 8^( . I hope we get some at the beach this summer. I'm SO jealous!