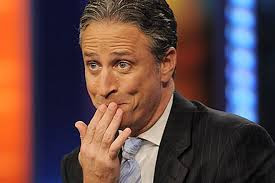 When The Daily Show started tonight, Jon Stewart had a secret that the studio audience didn't know...but that the viewing audience already knew, since the show is broadcast much later than it is taped and so his news had been all over the news and social media all evening.

Sometime later this year, at a date not yet specified, Stewart is stepping down as host of The Daily Show.  The tributes to him all over the media and news shows this evening made you feel as if he had died.

First Robin Williams, then Stephen Colbert, and now Jon Stewart.  It's definitely the end of an era.

I was not a fan of The Daily Show for the first few years, but Ned goaded me into checking it out and I was immediately hooked.  Stewart jokes that his is a "faux news" program and reiterates time and time again that he is not a newsman and yes, that's true.  He doesn't go out and find news, but he reports news he finds on other sources, and he interviews newsmakers, and in so doing he has created an entirely new genre of news reporting, one which holds the feet of everyone to the fire, who takes no prisoners, and whose facts, when checked, are almost always spot on.  He may have had a glitch or two in the past 16 years, but I don't remember any.  It seems that I read once that the two programs which had the least factual errors were Rachel Maddow and The Daily Show.

What will we all do without Jon Stewart?  We will survive.  We survived last summer, when he took off to direct his first movie (I knew then, in my heart of hearts, that he was getting restless and would soon leave for other pastures -- maybe not always greener, but different.)

Then, he left the show in the capable hands of John Oliver, who now has his own show on HBO, and is doing well...and can say all those words that Comedy Central has to bleep out of The Daily Show.
Stewart is making a very wise decision, though all of us fans are in mourning this evening.  He is going out on a high note.  He's not going to stay too long at the fair, but he is leaving the show, leaving people clamoring for more, not sticking around to the point where everyone is wondering if maybe he's lost his edge.

As much as I hate change, and as much as I have loved The Daily Show and look forward to it...daily...I wish him well and congratulate him for a very long, very successful roll of the dice.

His announcement at the end of tonight's show was very emotional and, as he fought tears, I had tears running down my face as well.  But hey, I cry at supermarket openings and Hallmark card commercials.
He's not gone yet.  It may be July, it may be December...he doesn't know, but he will leave a legacy behind that no one will be able to match, at least not for a long time. 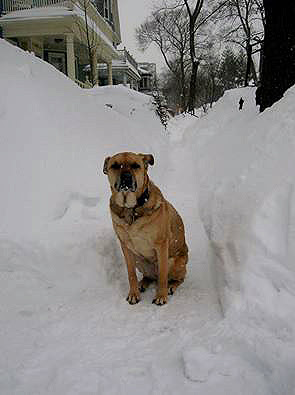 "Mommy, please make it stop," Lester seems to be saying.

You can see that the snow mountain has reached the top of Jeri and Phil's porch...fortunately they are up off the ground by several steps, otherwise their windows would be covered.

And Boston is set for two more storms to hit later this week.

I feel so sorry for them and for everyone in New England who is trying to cope with this incredible snow season.
Posted by Bev Sykes at 12:35 AM

My neck of the woods has been below-zero temperatures for more than three weeks. Record breaking cold.