One of the Girls

However, it was a fun day.  It started out going to get my mother.  Naturally she wasn't there because naturally she had forgotten we were going to San Rafael for lunch.  "Why didn't you TELL me," she wailed when I found her eating waffles in the dining room.  Doesn't matter that the last thing I said to her last night was that I would pick her up at 10, that it has been written on her calendar for two weeks, or that I have reminded her we were going every single day for the past week.  But that didn't surprise me.  I'm used to it now.

But what did surprise me--and I don't know if this is a good thing or a bad thing.  She asked, again, who would be there and why were we going.  When I said that it was to celebrate my birthday, she was angry with herself for not remembering.  Now this surprised me because I've been talking about my birthday in conjunction with this lunch for two or three weeks and she has never batted an eyelash.  I could just as easily be telling her that I was going to do a load of laundry.

But today she fixated on it.  How could she have forgotten her own daughter's birthday?  She so fixated on it that for about the first twenty minutes of our drive to San Rafael she kept saying over and over again that she has noticed she forgets things now and that maybe she should see a doctor.  That almost caused me to run off the road.  My mother could be dying and I'd still have to force her to go to a doctor, but for her to suggest it was unheard of.  Of course that was forgotten almost immediately, but I don't know if her fixation was a sign that today was a good memory day, or that all the other things she forgot was a sign that it was a bad memory day.  I think I'll just think of it as...a day.

I really enjoy getting together with these women, and so honored that Marian now considers me "one of the group." 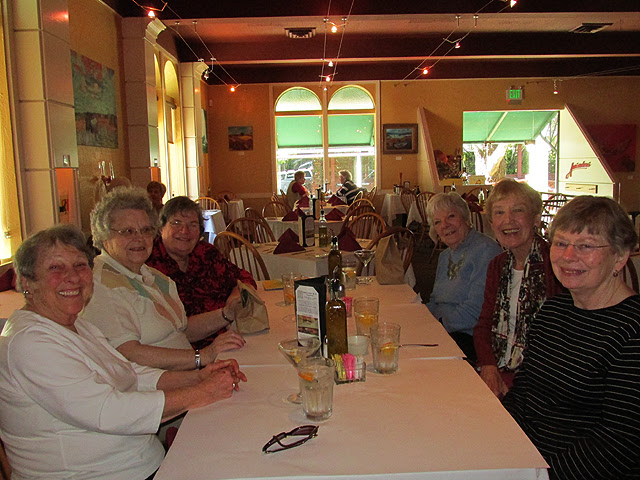 Around the table from the left:  Cinnie, my mother, me, Paula, Phyllis, Marian

We met at Arriverderci Restaurant again.  It's where we have been three times before.  Jeff was sick, so he wasn't able to make it.

Three of the women had veal piccata; my mother and I both ordered linguini with clams, which was fabulous. 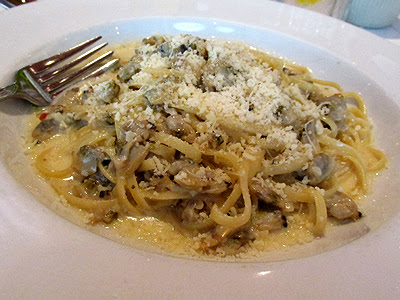 Neither of us could finish our meal and I made a big mistake.  My mother said she would take it home and have it for dinner.  I told her she would put it in her refrigerator and it would sit there until it went bad and said I wanted to take it home for Walt.  She was very huffy about that.  I realized I should have said nothing because the second she got in the car she would have forgotten about it anyway.

But after a minor bit of unpleasantness, which I could have avoided, she seemed to suddenly see the leftovers again for the first time and asked what would happen to them.  I said "if you want to take them home, that's fine; if you don't, I'll take them to Walt," and she told me she didn't want them and that they were Walt's.

Then she saw the dessert menu sitting on the table and asked if we were there to have lunch and if we had ordered yet.  I told her we had already eaten.

The "girls" all gave me birthday cards and the waiter arrived with a big piece of tiramisu with a candle in it, which we all shared. 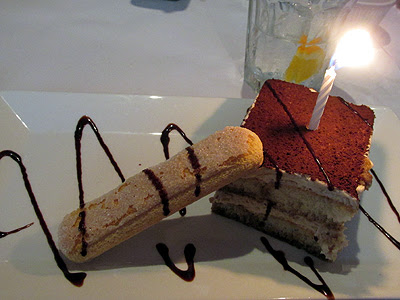 Some of the best tiramisu I've tasted.  So glad I chose this restaurant today!

On the ride home, I decided I just couldn't put up with another hour and a half of answering the same questions over and over and over again.  I only had 3 hours of sleep the night before and my patience was starting to wear thin.  But I have this playlist of music from the 40s that I made for her a few years ago.  I put it on and by golly she sang all the words to every single song.  Music memory sticks around longer than just about anything, I have heard.  She loved it, and I enjoyed singing along with her and not having to answer "are we coming into Sacramento?" more than three or four times.

There was a new wrinkle coming home this time.  From the time we entered Davis she began to be worried that she wouldn't be able to find her apartment.  That was a first.  She asked if I wanted to come in with her but I told her I was so sleepy and really wanted to get home and take a nap.  She asked me at least four times what her apartment number was and each time I said "Apartment 109...the door with 'Mildred Rynders' written next to it."  She was still nervous when she got out of the car, but I haven't had a panicked call, so I am assuming she was able to find the door she has been finding at least twice a day for the last two years.

Tomorrow I'll go over and pick up her dirty laundry and see how she's feeling.  She felt extremely unsettled all day because she was out of the house, but I notice that the longer we stay with the group the more relaxed she becomes and the better her memory is.  My god, someone asked her "do you remember so-and-so" and I expected her to say "yes" (she'll never admit she doesn't remember), but not only did she remember the woman, but even said something that she remembered about her!  That was very exciting.

I cling to little brief moments like that.
Posted by Bev Sykes at 12:00 AM

Email ThisBlogThis!Share to TwitterShare to FacebookShare to Pinterest
Labels: Lunch with HodgePodge