Lord, I wish there were a dog-to-English dictionary.  I desperately want to figure Lizzie out. Now Polly is easy to understand.  There are only three words in her vocabulary:  "food" and "lap" and occasionally "open the door."  She may seem to bark all day long, but she makes it perfectly clear that she either wants me to feed her or stop doing whatever I'm doing and sit down so she can jump in my lap or she wants to go outside.  The degree of urgency in her mind dictates the volume of her demands, but really it doesn't take much to figure it out. (She always wants to go outside around 10 at night, but then she stands on the patio and barks her "it's time to give me a treat" bark.)

Lizzie, however, is a more complex canine.  She is mostly the strong silent type and speaks more with her eyes.  When she wants something she comes to find me and then gently pokes me with her nose.  I can usually figure out what she wants by what time it is.

Both dogs used to be very happy eating dinner after Jeopardy.  In fact, the final Jeopardy "think music" was like a Pavlovian response.  As soon as the music came on, they would get up and come into the family room and start looking at me.

But they have been pushing the time back and back and back.  Now they try to get me to feed them at 3.  Both of them will come in here and first look at me and then when I don't respond, they poke me with their noses.  I don't look back and just say "no" and they turn and walk away.

But then there is Lizzie.  Whenever I let her out, she immediately goes to the back fence and barks.  It doesn't make a difference if it is night or day, dark or light.  It doesn't matter if there is someone in the next yard, a workman in a tree, or nobody.  She just stands and barks.  I give her a bit of time to bark, say 5 minutes, before calling her in.  She comes in and is just fine and content to sleep but when I let the dogs out again, there she goes to that same spot and barks.  I think if I didn't bring her in she would bark for hours and it drives me nuts because I can't figure what in the heck she is barking for.
If there is a guy pruning a tree, sure.  She's barking at him.  If there is someone in the back yard, she's barking at them.  But at 11 p.m. at night? Or at 6 a.m. on a Sunday morning?  What in the world is she barking at?  She doesn't question anything if I call her in and close the door, but then an hour or so later, she'll look restless, I'll let her out and she goes back to that same spot and starts barking again. She doesn't move from her spot.  She doesn't run back and forth.  She just stands there and barks and I can't figure out what she is saying.  This has been going on for years.

The dogs are lucky.  They can't read and they don't pay attention to anything on TV (and if they did, they wouldn't care).  I actually got sick to my stomach this morning reading posts on Facebook.  Just when you thought a story was terrible, the next one is worse.  And on and on and on until I just had to get up and walk away.  I couldn't handle it.

It's surprising how many people are suffering mental problems because of the current administration.  This may be the best thing that has happened to pharmaceutical companies that make anti-depressants.

But I now have an escape from all the ugliness of the real world.  Benny and Brianna.  There was yet another letter from Bri today, with a picture of Gasper and his two friends sitting at a table.  Her letter was short, but Gasper's letter to Benny was quite long.

Her letter inspired to make my Benny/St. Paddy's Day photo. 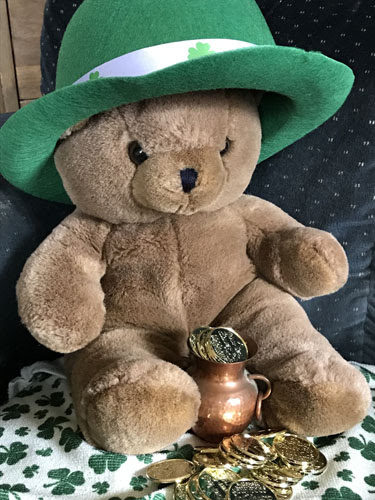 Then I sat down and wrote to her about Ireland and leprechauns and finding gold at the end of the rainbow.  I also told her about when her dad climbed Croagh Patrick, the hill where St Patrick built a small chapel.  All the family climbed up, but I still remember  the guy in the shop at the foot who looked at me and said "You aren't going to go up, are you?"

Somehow when you have a leprechaun on the screen and a 9 year old to write to, it's easier to forget the 70 year old child having a tantrum on the other side of the country.
Posted by Bev Sykes at 2:36 AM