The Patience of Job

This is how the day started, sort of.

This time the trip to Kaiser was for ME, not for my mother.  But it was just my annual exam, so not to worry.  I also wanted to talk with her about my worsening back problems.  Two years ago she took x-rays and diagnosed disintegration in my lower spine as well as arthritis. She really didn't suggest anything but an exercise program I could not do because it required lying on the floor--and if I get on the floor, I can't get up again!

But it has started impacting the quality of my life and I decided it was time to Do Something.  She prescribed some cream and also set me up to start physical therapy in April, after Caroline returns to England.

As we discussed options, she entered the prescription for the cream into the computer and I could pick it up after our exam.

I was also due for lab work, so I went to the lab, where you take a number and wait until it is called.  My number was 87 and they had just called 85.  I figured this should go quickly, but the guy at the desk was anything but quick. I would say he was new and trying to learn how it all works, but he was new and trying to figure out how it all works the last time I was there with my mother a month or so ago.

Not only did he have to call #86 first, but he also had to call all the people he had already checked in who were waiting for their turn in the phlebotomy room.  Finally he finished up with #86 and I looked up expectantly....and the desk was empty.  Apparently they had called a staff meeting.  So I sat there and waited for someone to come back. A couple of people who had numbers after mine just left.  Finally after about 10 minutes, a woman came to the desk, with the speed and efficiency I am used to experiencing in that department.  She got me registered and my blood taken in no time at all.

Next was to go to pick up my prescription.  There was a line that zig zaged through the maze set up, and then down the hall.  But if I wanted the med, I had no other recourse but to stand in line.  Up to this point my back hadn't been that bad today (maybe a 1 or 2 on the 1-10 scale), but by the time I stood in line for 15 minutes, it was pushing a 7 (standing is the worst for my back).  I must have looked horrible because a clerk finally asked me if I felt all right and I told her to just help the woman in front of me and then I could get my meds.  But the woman in front let me go ahead of her.  By now it had been an hour and a half since the prescription was called in and it is just a tube of cream. but I was told it "wasn't quite ready yet" (what? they were filling the tube?) and that if I would just sit down they would call me when it was.

So I sat down.  A guy wearing a "Kaiser Security Guard" shirt came in.  He looked older than my mother and didn't move as easily.  I sure hope they didn't give him a gun to keep us all safe.  I suspect he couldn't quiet an unruly toddler.

I finally got the cream and decided I'd stop at the nearby Applebees for lunch since it was getting close to 2, but the road to Applebees was blocked off with street construction, so I went instead to Tres Hermanas, a Mexican restaurant near the train station.  Whenever Walt goes to Berkeley for his dental appointments, he has lunch at La Fiesta, where we used to eat when we lived in the
neighborhood.  I always got 2 flautas, one beef and one cheese.  I think they are the ONLY Mexican restaurant offering flautas that offers cheese....and Tres Hermanas has flautas, but no cheese either.  Still it was a delicious lunch. 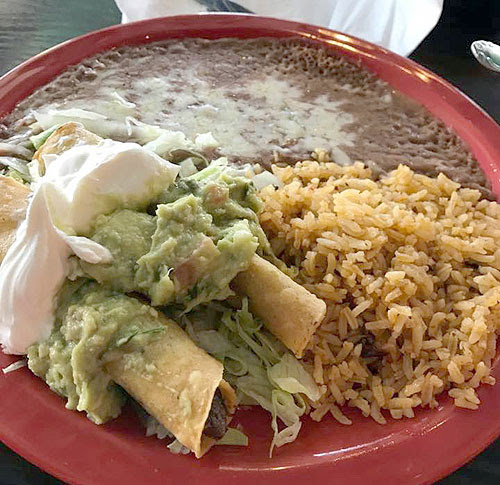 I was the only person in the restaurant, except for the figures on the wall.  I admired the decor as I ate.

From there I went to Atria to visit my mother but I had just finished a heavy Mexican meal and I could not keep my eyes opened to save my soul.  Knowing that I had to review a Chekov play I decided to cut the visit short and come home to take a nap so I could hopefully stay awake.  I think I was asleep within 5 minutes of arriving home and slept for an hour and a half, waking refreshed and ready to tackle Chekov.

I fixed an early dinner for Walt (the show was at 7), and I grumbled a lot about who in God's name would scheduled an outdoor performance of a play (at the Davis cemetery) in the middle of March, when the temps around show time have been in the 50s.  I even contacted the director to see if there would be blankets.  He hadn't thought of that, he said, but I might want to bring one.
So I got all suited up in a long sleeved shirt with a sweater over it and a parka over that.  I gathered up a knitted cap that would cover my hears and I wrapped a scarf araund my neck. I found a blanket and packed it in a bag to take with me.  I waddled out to the car like Cartman in South Park.

We headed over to the cemetery and at first I was really upset that there was no signage anywhere letting people know where to go.  But the director had told me he was going to set up behind the main building, so we went there, thinking it odd that at 10 minute to show time there were no cars around.

I took a flashlight and went stumbling around the cemetery trying to find this damn play.  When I got back in the car, very angry about the whole thing, I checked the theater's web page and see that it opens NEXT month, when the weather should be quite pleasant and the cemetery not quite so dark as it was tonight.

I felt very dumb, but at least we were home to watch Jeopardy which had been recorded, and were able to watch the opening of Season 2 of Designated Survivor live.

Toward the end of the evening I noticed that my arm is very sore.  I couldn't figure out why, since it's not like I've done anything physical or anything like that.  But then I remembered I had a pneumonia shot today, so I guess that's why. I'll sleep in the recliner tonight, because I don't want to sleep on my sore arm.
Posted by Bev Sykes at 1:01 AM