Days of our Lives

Did you know that March 23 is National Puppy Day?  We will not be celebrating, despite the fact that I miss "puppy breath" terribly.  How I loved those days of raising, especially bottle-feeding, puppies. 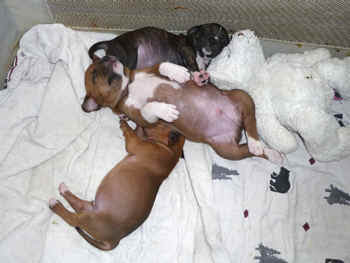 But that is an era that has come and gone, was thoroughly enjoyed at the time, but no more.  But I will raise a cup of coffee in memory of all of the puppies that shared our lives for all those years (these are the My Fair Lady puppies Freddie, Higgins, and Eliza).

On the Internet you can find holidays for every day, some mainstream, some rather offbeat (obviously the offbeat holidays are more fun).  Today, ironically, is "Memory Day."  I had a visit with my mother to "celebrate."

Something I received from Compassion this morning says "Oct. 10 is Hug a Drummer Day. Have you ever hugged a drummer? Of course you haven't. At least not since the last time you did and they passed on the traditional three-pat-on-the-back routine and hammered out an over-enthusiastic paradiddle on you, right?"  Heck, I hug a drummer all the time (Ned is a drummer) so never say never.

Not mainstream, but February 20 is "Hoodie-Hoo Day."  What the heck is that?  It is a day to chase away the winter blues, when people are supposed to go out at noon, wave their hands over their heads and chant "Hoodie-Hoo"!  I'm sorry we all missed that one.

My birthday, February 17, is Random Acts of Kindness day.  I like that...and it follows February 16, which is "Do a Grouch a Favor Day," which seems a good idea.

We missed Be Humble Day, February 22.  I'm sure Trump would have celebrated if he had known about it.  Maybe next year.

The month of March is, among other things, National Peanut Month.  I must lay in supplies for the rest of the month.  And we just missed National Bubble Week, which was last week.

Peanut Butter Lover's day was March 1.  I'm sure I indulged in peanut butter, since I usually have a spoonful or two every day.

Tomorrow should be fun, though.  It's National Goof-off Day.  Of course for me every day is goof off day, (just like every day is peanut butter day), so I don't have to go out of my way to celebrate.
I think I'll skip Chocolate Covered Raisin day (March 24), since those aren't my favorites, but I must remember to make waffles on Waffle Day, March 25.

The 26th and 27th are, respectively, National Spinach Day and National "Joe" day.  One of my standard non-Blue Apron meals is "Joe Special," which combines spinach and hamburger with eggs and parmesan cheese.  I would make Joe Special, but since Caroline is lactose intolerant, maybe I'll wait to do this until next year.

Who knew there was a Bunsen Burner Day?  March 31.   Light up your Bunsen burners and char something for yourself.

For those into that sort of thing, be aware that there is a whole week devoted to Karaoke, the last week in April which is National Karaoke week.  I won't be celebrating.

Whoever made up this list really likes peanuts because April 2 is peanut butter and jelly day, presumably different from plain ol' peanut butter day.

April 7 is National Beer Day, which you probably need after the 6th, which is "plan your epitaph day," which sounds a bit gruesome.  I wonder how many epitaphs include beer in them.  I'll bet we have the only gravestone with the epitaph "FTS" (which stands for F**k this Sh*t, which both Paul and David would love if they knew it)

April 13 is Scrabble Day, which I should find a way to commemorate with all of my Word with Friends buddies.  The game has been around since 1938 and I have probably been playing it in one form or another ever since I learned to spell.

April 15 is Rubber Eraser Day, perhaps no coincidence that it is also the last day to submit your tax returns (#45 take note, please....these returns are not under audit).  In Great Britain they are called "rubbers," which is the source of great hilarity when a British high school student attends an American school and asks for a rubber.  They learn the difference pretty quickly, I think!  Be careful of your celebrations for this day, though.  There is a controversy.  Some say it's April 15 and some say it is April 13.  Don't want to offend anyone by celebrating on the wrong day.

I must Celebrate April 17, which is "blah, blah, blah day," an actual copyrighted holiday.  I felt it referred to the content of these journal entries, but actually it is a day is to do all of the projects and things that people have been nagging you to do. This may include quitting a habit, losing weight, or working on home projects.  The list site includes a special flower for each day and a special recipe for the day and today's recipe is for a baked blooming onion, which I guess helps make the day less "blah."

Some of the other interesting holidays to round out the month of April are:  Newspaper Columnists day (18th),  National Garlic Day (19th),  World Penguin Day (25th), Hug an Australian Day (26th), and Hairstyle Appreciation Day (30th).

We are just a national of celebrations and thanks to the internet, we can find a way to celebrate anything we want to celebrate.  I may have to do this entry again to include May and June....
Posted by Bev Sykes at 5:56 AM