[Hey!  I'm feeling really good about myself yesterday.  Someone on Facebook pointed out that since I had one ice cream made of purple sweet potatoes and one made from avocado, I really had two servings of vegetables.  Yay me!]

There is something to this "bonding" stuff.  With birds, they imprint on the first figure they see (I remember reading Konrad Lorenz book, on which the movie I'll Fly Away was loosely based.  He explained it all.).

Babies bond with their mothers, and vice versa.  A mother can tell her own baby's cry in a room full of children and babies know their mothers by smell at an early age.

When you have a litter of newborn pups who don't have a mother, they very quickly bond with the familiar smell that feeds them, but by the same token, that ugly little dog that you took in yesterday suddenly is the cutest thing you ever have seen and the longer you take care of him/her the more closely bonded you become [maybe Polly is an exception.  :)  ]

This is only Caroline's fourth day here and I am already feeling the bond.  I got up at 5 this morning to bake muffins for her, I worried about her all day, hoping it had gone well for her...and then felt terrible when she came home and it had not gone well (at least not first, though she seems OK about how things turned out)

I watch her twirling her hair and realize that Jeri used to do that...and that if Jeri had married young she could conceivably be Caroline's mother.

Maybe part of it is because we have our kitchen table back and we are sitting, all three of us, at the kitchen table, talking to each other, and lingering after the meal to chat.

Tonight I showed Caroline Star Warts VII,. the movie Ned, Brianna and Lacie made last year.  She was very impressed.  I'm not sure what she expected, but I am sure she was surprised at the level of professionalism you can achieve with a green screen, a movie camera, and two little kids.

Ned has been down in Santa Barbara this week, working on a movie based on Harry Potter.  I don't know what is going to come of it, but it will probably take awhile.  That post-production stuff takes time (remember All that Jazz?).  We DID see the green screen in action, though. 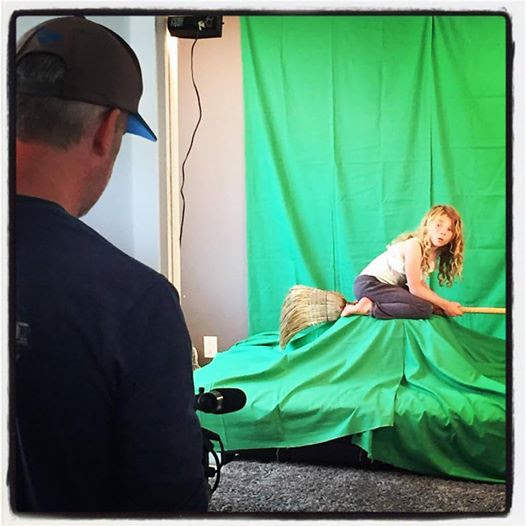 I was thinking of my father today.  He was obsessed with Watergate and watched every minute of coverage he could see.  He created all sorts of scrapbooks of newspaper articles to back up the thoughts he was having about Nixon

I watched a lot of the coverage of the wiretapp [sic] hearing today.  I'm not quite obsessed with it, not like my father was with Watergate, but I watched an awful lot of it.  It just made me feel dirty for our country.
First of all, BLOTUS (Biggest Liar of the United States) is caught in another lie.  Despite his faith in the "Talented Legal Mind," of FOX's Andrew Napolitano's statement about wiretapping, lesser experts like the head of the FBI and national security assure the committee that there is no evidence that Trump was even being wiretapped, much less at Obama's insistence.

AND, the longer the in-depth questioning went on, the more depressed I got at the depth of the corruption in this administration, which has not even been in power 100 days.

My new hero is Washington Congressman Denny Heck, a man who is also tortured over all of this and who, unlike many of his colleagues, is at least a man with a soul 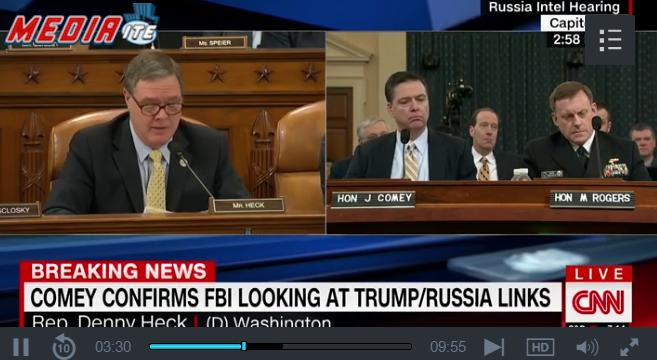 Listen to his comments to Comey.

So we'll see where it goes from here  In the meantime, No.45 is enjoying this week's $3 million golf game.
Posted by Bev Sykes at 12:30 AM