A year or so ago, I was at Michael's Craft Store and found a beautiful arrangement of artificial red carnations.  Michael's has great artificial flowers and I check the store periodically for flowers for my mother, who can't remember to take care of real flowers any more.  This one was gorgeous but would have been much too expensive except that it was about 50% off, or $40.  A chunk, but what the heck.
It has turned out to be the very best thing I ever bought her.  I can't think of a single time when she has not suddenly noticed the arrangement, as if for the first time, and said "aren't those roses beautiful?"

I have bought other artificial arrangements and live bouquets, but nothing since the carnations arrived has pleased her nearly as much as this bouquet.  It has, in the long run, saved me a lot of money because I know I don't have to spend money on flowers any more.  This arrangement is "new" every time she looks at it and her delight in seeing these beautiful "roses" is genuine each time. 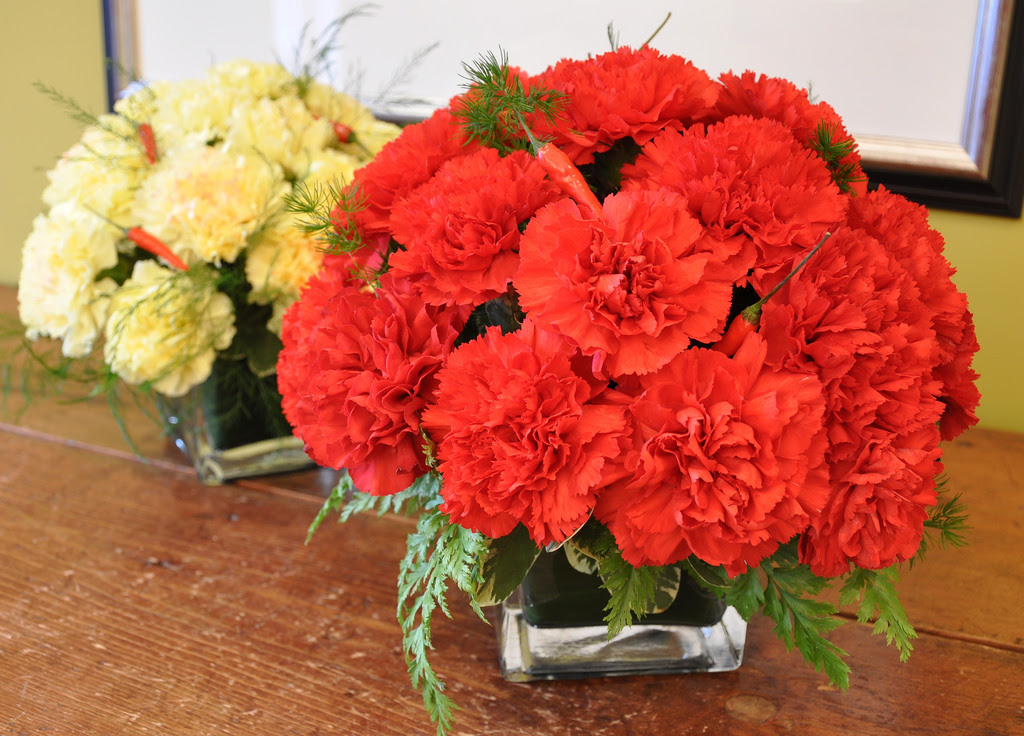 (this isn't it, but it's similar--her arrangement
is bigger, more spread out, and in a basket)

Today I decided to go for lunch, since it had been a busy weekend and I can't remember if I visited her over the weekend.  But I got there and it was parked solid.  Nothing in the Atria parking lot, nothing in either direction on the street and I was too lazy to park in the shopping center 2 blocks away.

["Too lazy" is only part of the reason...my back is giving me fits and I hope my doctor has some suggestions when I see her next week.]

I decided what the heck -- let's go out to eat again.

Well...fortunately as I was talking to her on the phone to try to get her to come to the car so we could go out, someone in the parking lot pulled out and I was able to park after all.  Trying to absorb that I couldn't find a parking place and would take her to lunch was entirely too complicated for her to comprehend.

She said "I don't understand a word you're saying, but I'll be here when you get here."

There is no way I could have guided her through the complex actions of putting on her jacket, getting her purse, and coming to the front of the facility, nor could I leave my car in the passenger zone.

It was clear from the get-go that this was a worse than usual memory day.  For example, she was reading a book written by her friend Father Joe O'Looney, a book she had typed when he wrote it.  I mentioned the book, which she couldn't find, because it was lying under the fresh cookies I had brought.  When she found the book, she thought she would read it because it looked interesting and "you typed it" made absolutely NO dent in her memory process.

She thumbed through the pages, and stuck at the back of the book ws a card. She took the card out, opened it and read the birthday greetings from Peggy Kerr, a former Atria resident who had become my mother's friend.  I wasn't surprised that she didn't remember who that was, but she put the card back in the envelope, closed the book, put the card on top of the book put the book back on the table and then "saw" the card for the first time and opened it to read it again, again not knowing who Peggy was.

Over lunch, her worsening word-finding was blatant, as she could not remember the word for anything and just substituted any word that popped into her head for what she wanted to say, or in indicating my cup of coffee, waved her hand and said "that.....that...that whatever you have in your cup."

I've also noticed that people used to stop and talk with her in the dining room, but they don't seem to do that any more.  She mentioned the beautiful white hair on "that woman over there" with whom she used to eat every day, but who is now a stranger to her.

It was time to pick up her laundry and I just despaired of her ever learning how and where to put her dirty laundry.  The waste basket was stuffed full of underwear mixed with puddle pads, including a pair of socks, one of which seemed to be smeared with feces (though I could not find any other clothes smeared with feces).  The bag in which I carry her laundry home with me was also a mixture of pads and pants and the laundry hamper was almost empty.

No point in trying to explain it to her.  I tried that before and it was way beyond her ability to comprehend.

I didn't leave depressed, the way I usually do, just sad that she seems to have taken another step downward.  I sure wish I could have one more conversation with my mother, but I fear that is no longer possible.

But i sure am glad I gave her those carnations.  I bring joy to her life every time she looks at them, even though she has no clue where they came from.
Posted by Bev Sykes at 1:11 AM