Happy pi day.  Well, technically it was yesterday, 3/14.  I decided to celebrate as many do on pi day...I baked a pie. 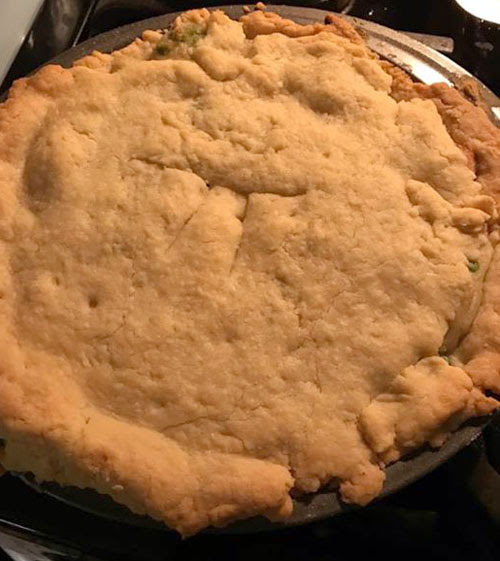 It was a chicken pot pie and it was delicious.  But once again it was a crust fail.

I just don't know what's the matter with me.  This is a recipe I have been using for about 40 years, it originated with Julia Child and I have made countless pies over the years using this recipe, but in the last several years--too many for my tastes--I just can't get the crust right.

I've tried everything.  I've tried barely handling the dough at all, so that it retains all of the flakiness.  I've tried working it into a smooth ball.  I've tried refrigerating it and not refrigerating it.  I've rolled it ut on a floured bread board or between two pieces of waxed paper, or in one of those special bags where you put your dough, zip it up and then roll it out, or on a special Wilton's pie crust pad, with the right sized circle marked for you.

It used to be that I made this dough, rolled it out thinly, put it in a pie pan effortlessly, and even had leftovers to make little sugar pies.

Now it seems that no matter what I do, I can't get it big enough, can't get it to roll into a circle without breaking into a zillion pieces.

Tonight I thought I'd mixed it perfectly, and put it in the fridge to chill for 30 minutes, but when it came to roll it out, the bottom crust was too thick and not large enough.  I put it in the pie pan and it barely covered the sides.

I put the chicken pot pie filling in it and then rolled out the top crust, this time using waxed paper.  It rolled out better, but stuck to the paper (yes, I had floured it!) and broke into pieces when I tried to put it on the pie.

I finally did the best I could and then cooked it and, truth to tell, it looked like crap, but was one of the flakiest crusts I've made.  Good thing it was just for the two of us so I didn't have to have guests see my crust failure, yet again.

Jeri asked me some years ago for my pie recipe and I gave her this recipe and she has been making it unerringly ever since.

I just don't know how I lost the pie crust gene.  But nevertheless I persist and when we next need a pie I will give it one more try.

Caroline arrives tomorrow night and we might be ready for her.  Not as ready as I thought we would be six months ago.  With our usual efficiency, we have saved all the work for the last two days.  In the process, I uncovered some lenses I have purchased for my old iPhone. Not very useful, but I did like this fisheye lens. 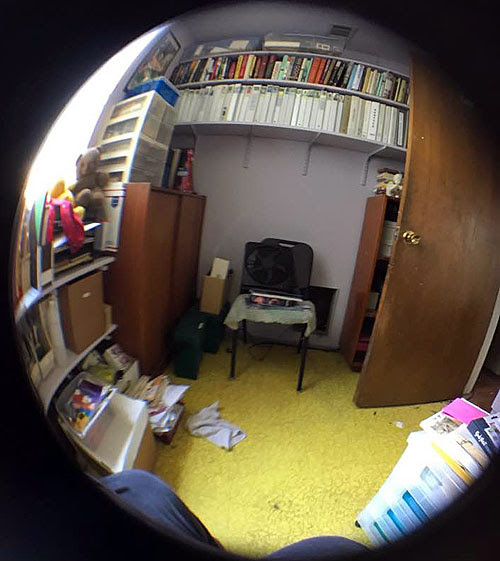 Totally impractical, but kind of fun to try.  The other lens was a close-up so close up that you have to almost be ON the item you want to photograph.

I did get most of the stuff that has been piled where the kitchen table usually goes all emptied and stuff either tossed out or, believe it or not, finding a home in my office  The furniture is still there.  We haven't figure out where to PUT it, exactly, so we still have no kitchen table, but I have hope that when we finish the chicken pot pie tomorrow night, we can both sit at the kitchen table.  We may have to move the furniture out to the back yard.  Now that rain seems to be over, it should be OK.

Walt has washed all the bedding in the guest room so that's taken care of.  He also removed the 30 or so empty Blue Apron boxes that have adorned the stairs for months  He says he moved them to the garage.

Walt picked up the bike we are borrowing for her visit and I tried to contact our friend with the horse ranch, which Caroline would like to visit if there is time.  She also wants to visit Sacramento's Crocker Art Museum, which should be interesting.  I have lived here 43 years and have never been in it!  And I've arranged for tickets for her to the two shows I will be reviewing while she is here.

I sent a note of bon voyage to Caroline tonight and told her that she should have no trouble spotting our car at the airport, "It is a silver-ish Honda Accord...like about 85% of all the cars on the freeway today!"
Posted by Bev Sykes at 12:01 AM

Crust - could be flour. I used one brand for years then overnight it seemed like I couldn't get the crust the way I used to make it. Changed brand and handled dough less and crust improved but still not great. The flavor is good so I guess looks aren't everything.

That's an excellent observation. I DID change my flour brand within the last five years. Maybe that's it.