When I go to Atria, I stay almost exactly an hour.  I don't keep track of the time, but it seems that we run out of things to talk about or I can't take one more round of "I'm old, Bev."  Today I was there to pick up laundry and I was telling her I was cooking corn on the cob for dinner.  She groaned. . She loves corn on the cob.  I was thrilled.  I had 3 ears at home, and plenty of chicken so I invited her to come back with me and have dinner at our house.  But she said she has been feeling dizzy lately and didn't want to leave her apartment ("dizzy" is the excuse she uses when she wants to get out of something) 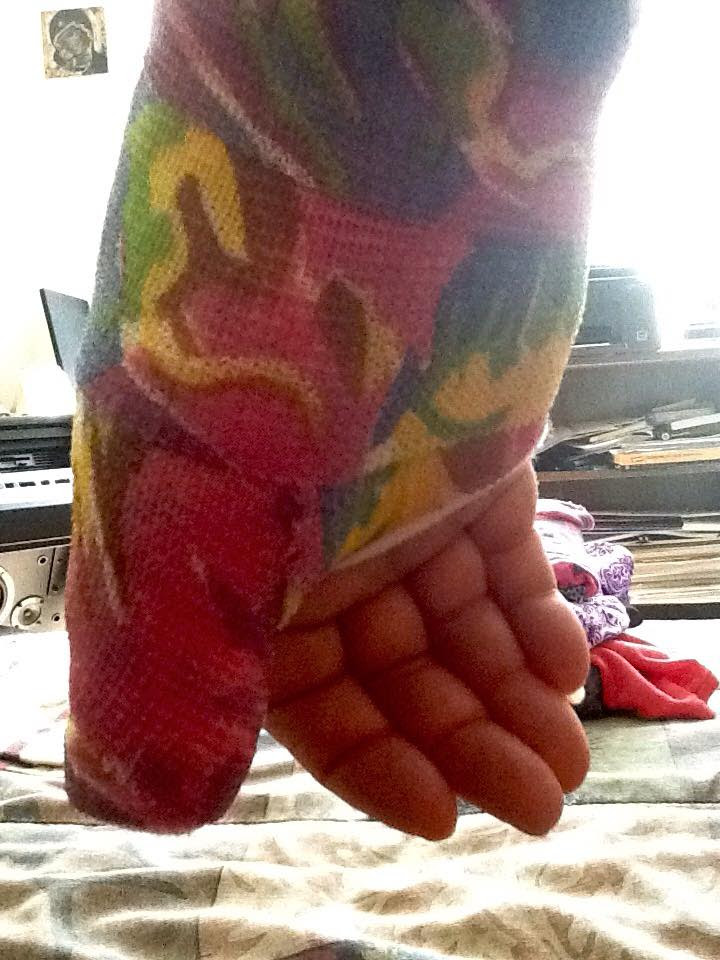 Trying to find something different to talk about, I started telling her that Peach broke her wrist. She had been trying to turn one of her dogs over to the groomer and she went in one direction and the dog in the other and somehow she broke her wrist.  Says it "hurts like hell" but she has a classy tie dye cast.

I was going to try to find the picture of the cast with my phone and then realized....phone!  I could call her.  So I placed a call, turned on the speaker and we could both talk to her.  My mother didn't say much, but she enjoyed listening to the two of us talking.

She (my mother) has a hard time remembering Bob's name these days, and can't remember where they live or why they moved there, but I think it was good for her to hear Peach's voice.

She'll be in the cast for 8 weeks and because she can't help Bob like she usually does he has a motorized scooter to get him to the dining room for meals.  She has someone come in to help her shower twice a week.

By the time the phone conversation was finished and I had gathered up the dirty laundry for the week, my hour was up.  I was sorry not to be bringing her home for corn on the cob, but given how dinner prep went, that may have been for the best.

I was going to fix a good ol' Amurrican dinner of fried chicken, biscuits and the corn.  I usually make biscuits with Bisquick, but decided I wanted to make them from scratch and went to get my little book that has the recipes I refer to most often these days.  It resides in a magazine holder with my Food Network magazines, right next to the recliner.  Only it wasn't there.  It got cleaned up for the party (we are still trying to find things).  I couldn't find it anywhere downstairs so I went to my iPad to look up a recipe and the iPad has been very wonky lately and after 5 minutes it still was searching for "biscuit recipe."  I gave up and used the desktop and found a good recipe right away.  (Walt finally found the box I was looking for upstairs, but it was too late by then.)

All three 3 things I was cooking take about the same amount of time to cook, which was going to be convenient.  I flour my chicken with regular flour, salt and poultry seasoning.  Only after I put the flour in a bag to shake the chicken, I couldn't find my regular poultry seasoning.  I found a brand that wasn't what I wanted, so tried to shake a bit of that into the flour and a huge glop came out.  I tried to remove some of it, but it incorporated into the flour too  quickly.  I decided it probably wouldn't be that bad, so I went to put some salt into the bag as well and instead of a bit of salt about a tablespoon of salt went in.  I gave up, threw that bag away and got another bag, where instead of "shaking" I spooned the seasonings into the flour, and instead of using the poultry seasoning I don't like, I just went with thyme and sage and salt.

So.  Chicken finally floured and in the frying pan, I mixed up the biscuit dough.  Only my pastry cutter was missing, so I had to use forks instead, which worked all right.  At one point, before I started to roll out the dough, I was standing in the kitchen with my arms at my side and Sheila, who eats like she has a tapeworm these days came up and licked my hands.  Back to the sink for another wash.

There were no disasters with the corn.

But it's funny.  It seemed for a moment (though now that I read back on it, it doesn't) that everything was going wrong, starting with the iPad, and a switch turned off in my head.  Though we were having one of my favorite meals, I just wasn't hungry any more.  I ate half of one piece of chicken and half of my corn (though I managed to find room for an ice cream bar for dessert).

Walt was very sweet.  While I watched the unfolding disaster on Last Tango in Halifax (can't those guys ever get a break?) he cleaned up the mess I'd left in the kitchen.  Then, since he has no voice tonight, for reasons which are not yet clear, he went off to bed while I stayed up to see who was going to be booted off the next episode of Next Food Network Star (they made the right choice).

So the night is winding down and I have only written half of each of the two reviews I was working on today. Tomorrow I have an interview for the volunteer position at Sutter Davis Hospital.
Posted by Bev Sykes at 6:15 AM

Email ThisBlogThis!Share to TwitterShare to FacebookShare to Pinterest
Labels: cooking, My Mother