And Life Goes On

"You look depressed," Walt said to me over dinner.

I hadn't realized it showed.

It's nothing unusual, just the same old stuff.

I went to visit my mother today, since I hadn't seen her for a week, due to our being in Santa Barbara.  I stayed my usual hour and at one point I wondered which was worse -- having your mother die, or having her live, but not the person you've known all your life.

I wanted to share with her the things we did, since she always wants to know what I'm doing that's exciting. I gave her an outline of the things we did, who we saw, where we went.  She looked passively through it all and then said what she always says "Well, life goes on whether you want it to or not."  Then she told me she's old.

I brought my iPad so I could show her photos.  Each time she saw Bri in a photo she would say "who is that little girl?" and when I told her she'd ask who her parent was.

We went through the weather discussion several times -- is it hot or cold?  It can't be hot because I can see a leaf moving, so there's a breeze.

I tried family news.  I told her that my cousin Donna is moving out of Marin county.  She didn't know who that was.  I said "Remember Shirley had the three daughters with D names -- Debbie, Denise and Donna?"  She said she guessed she had never met them.  When prodded she did remember that Denise comes and gives her manicures.

She reminded me she's old.  She really looked old today.  Kind of limp and, the usual staring out the widow, uninterested in anything.

I asked her if she had heard from Ed (her stepson on whom the sun rises and sets) and at first she couldn't remember who that was.

Compared to things I read in my dementia support group on Facebook, I am so much luckier than many people, who are dealing with parents with really severe dementia and Alzheimers, but I just wish I could ignite a spark in her for anything.  I was thinking of dear Nancy, who died of Alzheimers a couple of weeks ago.  To the end, every photo you saw of her she was smiling broadly and enjoying life, even if she wasn't sure who the people around her was.  I would love to see a smile like that on my mother's face.

I miss my mother, dammit, and I don't know how to get through to this nice, vacant old lady who is sitting in her place.

But life goes on...whether you want it to or not.

I have two potential new ventures coming up.  A reviewer for another newspaper is having to give up for health reasons.  I have been asked (by another reviewer) if I might be interested in her job.  I'm going to contact the editor tomorrow about it.  I would not give up the reviewer job that I have now, but would rewrite my Enterprise review into a shorter format for the other paper.  I am told the job pays better.  It would be nice to have get two checks for one show.

I also answered an ad looking for volunteers at Sutter Davis Hospital.  There were several open slots where volunteers work and I decided to check out the information desk.  So I have an interview on Monday to see about that.

Finally, I had the sad news that Shallon, a girl I have sponsored in Uganda for the past 5+ years has now aged out of the program and is going to be starting her own hairdressing business.  This is the girl who has called me "Mother" since she lost her own mother several years ago.  She is one of my best letter writers and I feel closer to her than any of the other kids.  But this is what the program is all about...helping the kids to where they can be self-sufficient, and contributing members of their community.

i was able to write a "good bye" letter, which I worked on for a long time today.  I also sent her a 5x7 photo of a picture of the two of us I had made using PhotoShop and PiZap.  They say I have a goodbye letter from her in the pipeline as well.  It will leave a hole in my heart to lose her, but I'm so proud of all she has accomplished. 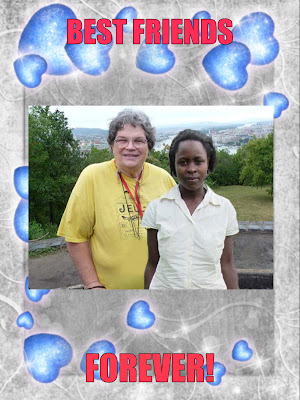 Email ThisBlogThis!Share to TwitterShare to FacebookShare to Pinterest
Labels: My Mother, Shallon, SNR