What do old people talk about when they are alone together?

Joe made pancakes for breakfast this morning, which we all enjoyed.  Then we sat around discussing things that had happened with Bri yesterday.  At some point I decided to go take a shower while I didn't have to fight at least 3 other people for a turn.

When I got out and returned to the living room, there was a lively discussion going on about the rules of hop scotch. 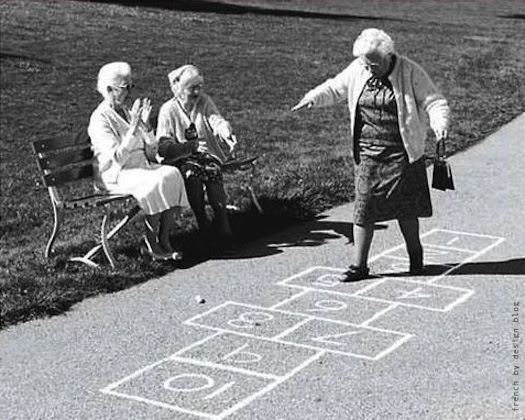 The discussion turned so serious that I ended up on Wikipedia while Olivia was finding "how to" videos on You Tube.

Fascinating, the internet.  Did you know that it is guessed that hop scotch (originally called "scotch hoppers") originated with the Romans, but the rules were not written down until 1635 in a book called "The Book of Games" by a guy named Francis Willughby.  It is also a pretty universal game.  In India it's called Stapu (though India seems to have many different names, depending on the geographical location), in Spain Rayuela, in Israel Klahss, in the Netherlands Hinkelen, in Croatia Skolica, in Malaysia Tengteng, in Mexico Mamaleche (interesting name!), in Cuba La Pelegrina, in Brasil Amarelinha, in Scotland Peevers, in Albania Rrsavi, and in the Philippines Piko.  I'm sure there are lots more variants.

In Australia, hopscotch is played in stages. First stage is played by hopping per the standard rules. Once this stage is complete, the player is promoted to the next stage called "jumps" where the player jumps into each square with two feet. Final stage is the most difficult stage called "sizzles", which is similar to jumps except the legs are crossed. The first player to complete all three stages wins. 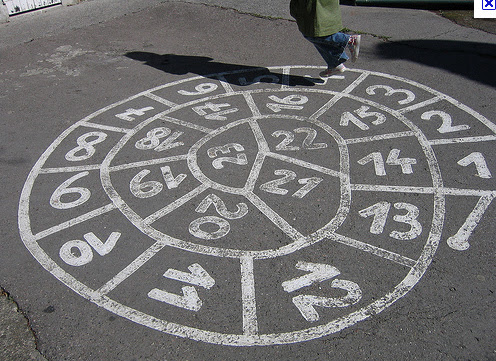 (Those French always have to be different!)

This in-depth discussion, complete with video, did not lead to a game of geriatric hopscotch.  I doubt that I could get to 2 these days without breaking my leg!

It was a very lazy day.   By 3 p.m., Walt and Norm still not had taken showers. I went off to the store to order Tom's birthday cake to be picked up tomorrow.  Norm was settled in to watch golf, and then baseball.  I went back to sleep after going to the store and slept for more than an hour.

In the late afternoon everyone went to Costco to buy food for tomorrow's picnic. 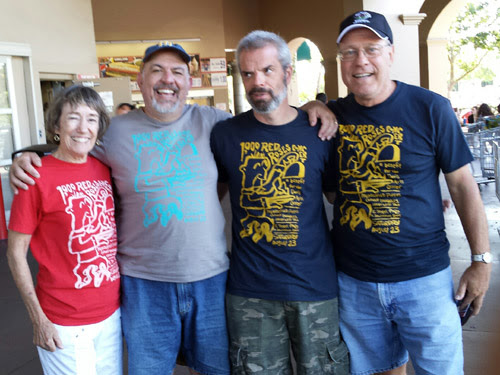 (apparently there was a dress code.  I didn't get the memo)

I opted to stay home and read my book.  I am turning into Marta, who spends most family social occasions in a different room reading a book.  There is something to be said for that, though I am sure we are both considered anti-social.  I find the older I get the more the loud noise of crowds, even people I love, begins to get to me and I really just want to get away somewhere with a book for awhile.

For dinner we went to Family Movie Night (with tacos) at Tom & Laurel's.  We sat around communicating with each other.

Lacie decided to be a superhero (that blue thing that says "Santa Barbara" on it is actually her t-shirt!) 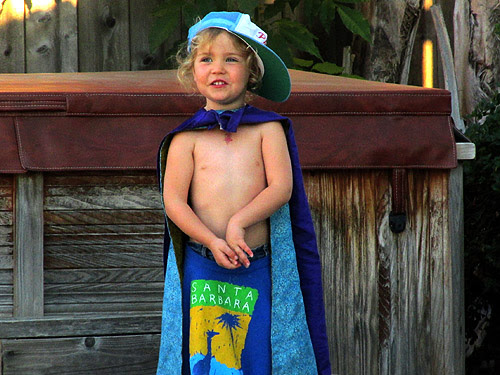 While eating Tom's delicious tacos, we sat around outside watching cartoons.  1930s Mickey Mouse cartoons were particularly entertaining, especially as the guys tried to figure out how a football game could have a score of 96-96) 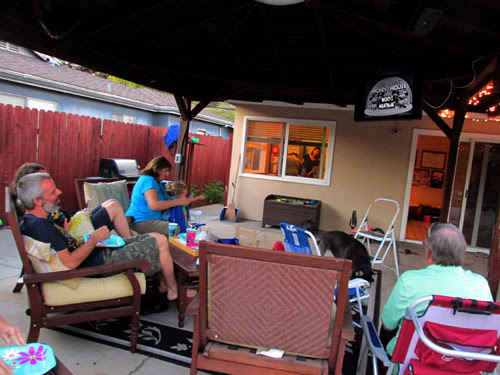