Walt, Sheila and I are kind of weird.

Sheila, our dying dog, the one the doctor predicted had "maybe weeks" to live is acting reborn.  She is perkier, friskier than she has been in a long time.  Whenever I leave the house, I always give the dogs a treat.  When I announce "treat time" all three used to come running, but then Sheila figured out that she would get a treat even if she didn't come running with the others.  She would stay lying on the patio outside or the couch inside.  If I tossed the treat out onto the patio, she'd lumber to her feet, eat it, and then lie back down again. If she were on the couch, sometimes she would raise her head to take the treat, sometimes just opened her mouth and took it without hardly lifting her head.  Her eyes always had that dull "oh, if I must wake up, I guess I will" look about them. I began calling her "your majesty" because she seemed to be insisting on being waited on hand and foot.

Since she has started on the Prednisone, she now comes running with the others.  She sits to wait, with that big Sheila grin on her face. 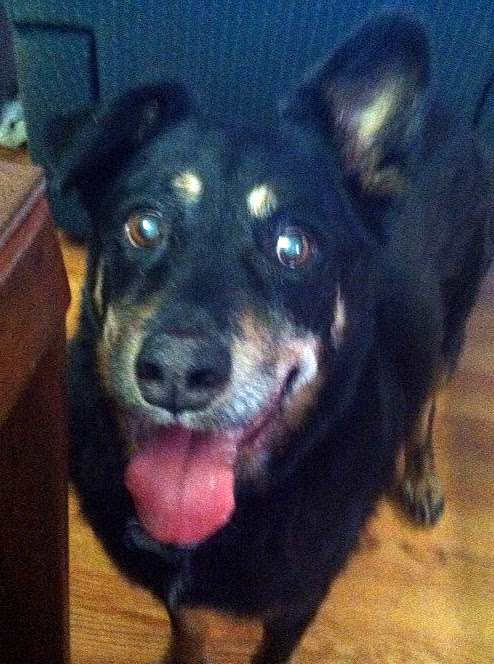 If this is a dying dog, what a wonderful way to die!

As for Walt, his voice is slowly coming back.  He has been about 4 days with little to no voice.  There was no real reason for it.  He had no other signs of being sick.  He had no sore throat, no symptoms of allergies, just one day his voice started sounding funny and by the next day he could barely croak out a sentence.  But he started to sound more normal yesterday and by last night he still had that deep chest voice, but more volume.  He said he remembered feeling like this when he had his tonsils out and thought he should have gotten ice cream.

And then there is me.  I was not really sick, but suffered from extreme lethargy and mild intestinal problems.  I went to have lunch with my mother, then to Sutter Emergency Room to have my TB test read, then out to Kaiser to get the first in a series of 3 Hepatitis-B shots (not a requirement for the volunteer job, but a recommendation).

When I got home, there was lots to do but I just couldn't stay upright and just wanted a nap.  I think I slept 2 hours or more.  I then napped through half of Chris Hayes and most of Rachel Maddow, getting up only to go to the bathroom. We watched Jeopardy and I fixed Walt leftovers for dinner, but had no appetite at all.  I really didn't get out of my recliner for anything -- checked email on my iPad, put off writing a journal entry -- until 11 p.m., when I staggered into the living room to go to sleep.

I may have slept some, but I had so much sleep during the day that I seemed to be wide awake.  I tossed and turned, tossed and turned, and finally, wide awake, came out to the recliner with my iPod at 2 a.m. and started listening to my current audio book, "Room."  It was probably a bad thing to do because the story at that point was so gripping I listened for the next two hours.  Still not really sleepy, I came in here to write this and then will try going to sleep, maybe for a couple of hours.

My stomach feels better...kinda, sorta...though I did have a little bit to eat and my stomach is telling me it knows that.

So we are all either dying or very sick, or just faking it.  I don't know at this point!
Posted by Bev Sykes at 5:03 AM

Email ThisBlogThis!Share to TwitterShare to FacebookShare to Pinterest
Labels: sick?

Odd assortment of ailments! I do hope all are better soon.