When the day comes there’ll be a grand public ceremonial – you’ll be the central figure – no one will attempt to deprive you of that distinction. There’ll be a procession – bands – dead march – bells tolling – all the girls in tears – Yum-Yum distracted – then, when it’s all over, general rejoicings, and a display of fireworks in the evening. You won’t see them, but they’ll be there all the same.
KoKo...The Mikado

On Bastille Day, 1986, I called my friend Gilbert, the musical director for The Lamplighters, in the morning to wish him well on his upcoming surgery.

It was a simple surgery, really. A stitch from a previous hernia surgery had become infected and they were going to remove it.  It was such a simple surgery they could have done it under local anesthetic, but the doctor said he might have to dig deeper than he anticipated and offered general anesthesia.  Gilbert was nervous about that.  "You put your life on the line whenever you go under general anesthesia, you know," he had told me the week before.

I told him I would drive down and take him to work the next day (he was going to be home from the hospital that night) and we said goodbye.

I spent the day in the Napa Valley, giving a winery tour to a visiting German student (who had spent the previous week exploring San Francisco, using Gilbert's house as home base).  Our last stop was at a winery which had just recently started sponsoring The Lamplighters to pick up a free gift to take to Gilbert the next day.

When we got home the look on Walt's face told me something was wrong.  I had had a call from the General Manager of the Lamplighters.  Gilbert had a heart attack in the recovery room and things looked grim.  Damn him for proving his predictions about general anesthesia.

I made more calls, including one to a woman who worked at the hospital and had seen him in recovery and told me that it "didn't look good."

I sat here waiting for news, which eventually came.  "Bev?  He died."

We found out later he had an undiagnosed pituitary tumor and the anesthesia somehow caused it to overreact which caused the heart attack.

But whatever the reason, he was gone at age 55.  This wonderfully talented man who had been an actor, director, and music director...and my dearest friend.

I drove to San Francisco that night to "straighten up" his house before his family arrived, removing any traces of his gay life that might offend them.  There wasn't much, but I got rid of it all.

His family flew out from Oklahoma to take care of things, but since they didn't know anything about Gilbert's life (other than that he was one of those dirty queers they really didn't feel comfortable around).  A group of his friends helped make the arrangements, for the "viewing," the cremation, the scattering of ashes, and the memorial service later at the theater.

It was a gala occasion.  He would have loved it.  A full house in the ~500 seat theater, the "festivities" beginning with the orchestra playing the overture to HMS Pinafore without a conductor, just a spotlight shining down on the conductor's baton.  Very moving. 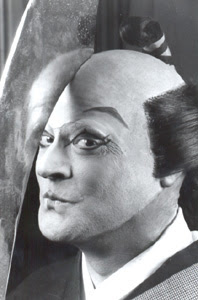 In his comments, John Vlahos, president of The Lamplighters, said
"He had many incredible qualities as a performer--a tremendous intensity, a delicacy and an elegance which permeated every role. But there are two qualities that stick out in my mind that made him such a classic Gilbert & Sullivan patterman. The first was his wit and good humor--and he certainly bubbled with it. He never stepped out of character and milked the audience for a cheap laugh, but his humor was always spontaneous, it was creative, and it would grow...

"The second quality was believability. Gil always respected the character. He made that person a character, not a caricature. He was never one to lampoon a role...That combination of creative, controlled wit and humor and steadfast insistence on believability you can sum up in one word: style."

Will Connolly, his good friend, who delivered the eulogy, praised Gilbert's intellect, his rare wit, and his "artlessness, which allowed him to see things with the unfettered enthusiasm of a child. There was in the same person a pure child and a great man..."
Vlahos concluded by saying, "The answer to Katisha's rhetorical question is never will we find another."

After the family returned to Oklahoma, the plan was to o hold a public sale, let people walk through his house and buy whatever they wanted.  He would have hated that.  The lawyer offered me the contents of the house for $1,000 and I bought it, gave away the things he loved most to the people he considered his friends, brought a lot of things here and let the rest go to the Goodwill.

On July 14, 1987, the group of us who had worked with his family on the funeral got together for a dinner and to raise a glass in toast to his memory.  Out of that dinner grew GRUB (Will Connelly's "Gala Re-internment of Uncle Buddy"), a group of his friends who meet annually to have another dinner and raise another glass in toast.  "Oh....it's you..."  Our group is smaller now.  Will died a few years ago, as did Jean and Adrian, John is physically incapacitated, some of the earlier people in the group have dropped out.  But the hard core among us, about 8 in number, still meet once a year to honor his memory.  We have been doing this for much longer than any of us knew him.  He would be amazed.


Today is the 29th anniversary. I think of the things that have happened in the last 29 years and how much he has missed.  He died just before the internet really got going.  We had bought little Apple IIc computers together and were learning them together.  They didn't even have hard drives.  Nobody did e-mail yet.  Google wasn't even a dream.  He would have loved the internet. 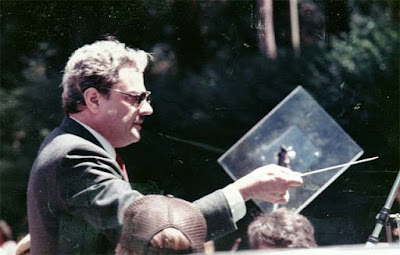 Email ThisBlogThis!Share to TwitterShare to FacebookShare to Pinterest
Labels: Gilbert