It was a bad memory day at Atria.  I had new pictures of Brianna and Lacie that I had framed for her.  She was  thrilled with them and said "oh...what cute little girls" but then said "who are they?"  I pointed out that they were her great-grandchildren and she said she didn't remember ever seeing them before (though she sits across the room from several photos of them and tells me every day how cute they are).  She then suggested that I write their names on the back of the frame to help her remember.

I'm afraid I was not in a good mood today.  My cousin Niecie was there and my mother made that disgusted sound when she said "what do you think about her hair?" and then when we went into the dining room to sit with Margaret, she rolled her eyes and turned to Margaret and asked "what do you think of her hair?" I'm getting tired of her disgust over my hair, though when people comment, she corrects herself and says I "did a good thing" but her attitude tells me that she's still disgusted by my appearance.

Her back pain is getting worse and as I watched her wince while getting out of her chair, I suggested that maybe we should go see the doctor again.  "NO!" she shouted at me.  She won't take pain medication, and she won't try using a walker, though she tells me "you don't know what I dol"  No.  I just know that she tells me nearly every day that if she ever has to use a walker, I should just shoot her.

I was glad Niece was there.  Niece is perpetually upbeat and only sees the good and positive in her visits with my mother, but then she only sees her every month and a half or so.  I'm afraid that today I could not share her joy in being there.

It's not her fault.  Of course it's not her fault and I'm a bad person for being upset about it, but some days my tolerance is just a little bit lower than other days.  I should always keep my father in mind.  As his father got more and more feeble, my father's anger at him got worse and worse.  He hated that he had to help his father walk.  He hated when it took him a long time to do anything.  When he was in his last hour in the hospital, my father went out to get a haircut for the funeral and he died in my mother's arms, while my father was not there.

After the funeral there were copious tears and stories about what a great guy his father had been.  Just not when his body began to fail him (though he didn't add that).  My mother has been my hero most of my life.  I should think of that, and not the things that frustrate me on days like today.

Walt and I are attending a theater festival at the university.  Five student-written plays, 2 last night and 3 tonight and last night was a blatant example of how we are not part of the world in which today's young people live.  Heck, our kids are not a part of that world! 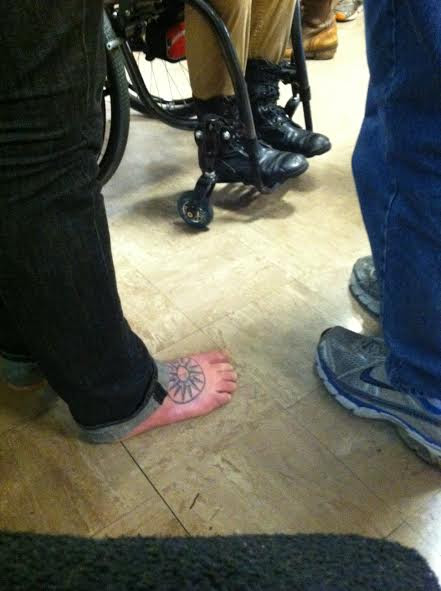 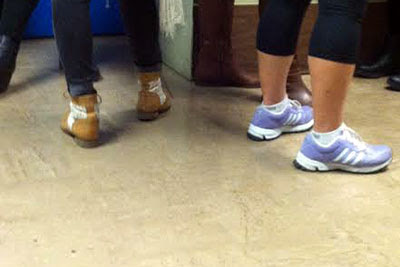 First, at the intermission, we all had to file out of the theater and wait in the hall.  I was taken by the difference in the feet...from the boots on the wheelchair to the tattooed bare foot, to the contrast between the tan boots and the purple trainers.

The second play was about the world of cell phones and everyone in the cast spent the whole show on their cell phones, the light of the phones shining up on their faces.  The dialog was "internet speak" with terms like OMG and LOL and discussion about the use of winkie faces and Bitmojis (an example of a Bitmoji is at the left, they are individually designed using a caricature of your own face that you design on the site).  I was glad that I have been around this internet world long enough that I actually know what a Bitmoji is and have used them from time to time.  So I could kinda sorta follow the action and get a sense of what message they were trying to convey, but in the talk-back with the director after the show, it was clear that everyone in the audience (all college age) thought it was brilliant and accurately displayed the life of the normal college student and his/her relationship with the cell phone and how face to face relationships were affected.

We were obviously not the target audience!
Posted by Bev Sykes at 7:20 AM

Email ThisBlogThis!Share to TwitterShare to FacebookShare to Pinterest
Labels: My Mother, theater

Hm. I'm thinking of seeing that show, but I am not super into emojis and texting and whatever the crap...maybe I should skip it?

Oh go. It's definitely worth it. A little weird, but most shows like this are. Go both nights. Second night is better, IMO.g

I just came back from the second program and LOVED the two women! Loved, loved, loved.
(The "dance" on the other hand...second dullest dance performance I've ever seen. Sigh.)
Anyway, I guess I'll go see Program 1 thanks to your recommendation! Now I'm off to write about the shows I saw....

LOL. That's kind of how I felt about the 3rd show. I do not understand avant garde stuff like that.