All That Jazz, Part 1

In 1990, the Davis High Jazz Choir, of which David was a member in that year, traveled with their director, Richard Brunelle, to New Orleans to compete in a Jazz Choir competition.  It had long been Dick's dream to take a group of jazz choir members to New Orleans.  He envisioned them dancing on the streets of the French Quarter.  This was a huge thing for him and a huge thing for the jazz choir, which rarely traveled out of state, much less across the country.  Paul and Tom had both been in the Jazz Choir too, but I think the farthest they ever went to perform was Disneyland.

This morning I happened upon the scrapbook I kept of that fateful New Orleans trip and marveled at how glad I am that I am an inveterate journal maker.  This was in the days before on-line journals, and I was not keeping a regular journal in those days, but I did keep pretty complete records of our big trips.

I thought it might be interesting to hit the highlights of that trip over several entries here.  Maybe one a week or something.  In this first chapter, we deal with the difficulties of transporting 20 kids and 9 big wooden blocks across the country, dancing up and down the Mississippi, and Walt and I fighting over a room with James Foreman, the former head of SNCC (Student Non-Violent Coordinating Committee), who was being honored by the NAACP that weekend

As a surprise to Dick, the kids had shirts designed and when we got to the airport, they all disappeared into the bathrooms and came out wearing the shirts. 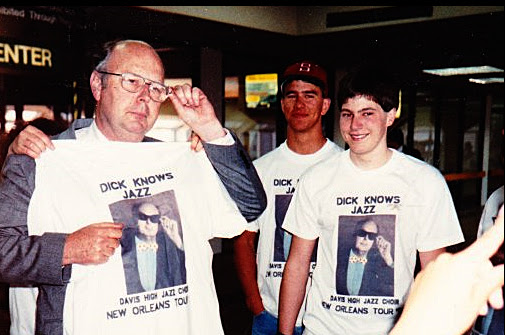 Everyone had a good laugh at Dick's surprise, finding himself on a t -shirt. 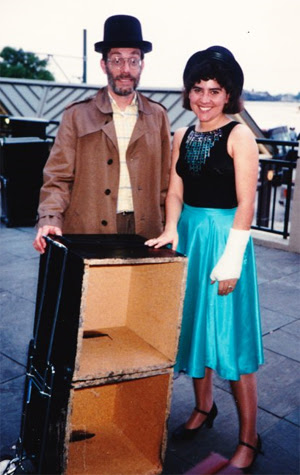 Then we need to talk about the boxes.  The boxes were an integral part of the choreography.  There were 9 of them and throughout the weekend, they were the bane of our existence.  Walt was the official tech guy, tasked with keeping them together, which was a bigger job than he anticipated since some of them needed to be rebuilt more than once.

We had each kid check one block along with their luggage, and so we got them shipped across the country effortlessly.  The flight(s) were uneventful but the confusion began upon our arrival in New Orleans.

(Interestingly, I wrote -- in 1990 -- "This is a state with no water problems!  Not only the vastness of the swamp system that we saw flying over, but also the fact that the restroom toilets flush automatically every 20 seconds or so.  You'd be arrested for that sort of thing in California!"  Not much has changed in the past 15 years, except things have gotten worse in California!)

Our first problem, after retrieving our luggage, was that New Orleans insists that all luggage be checked before leaving the baggage claim area.  Since Barbara, the head chaperone, handled all of the tickets and tags it meant she had everyone's tags for the 9 blocks and 2 guitars.  We formed a line that extended half the length of the baggage claim area while the clerks resolutely checked every piece of luggage leaving the area - even insisting on checking the tag on every single block to make sure it left with the student who originally checked it in California, despite the fact that all 9 blocks were identical.  The check-out process went on interminably.

There was also a mix-up with our bus, which wasted another 30 minutes, and by the time we arrived at our hotel it was after 4 and the kids had to be at Jax Brewery at 5 -- and we didn't know where the place even was.  That gave us 15 minutes to settle into our rooms and for the kids to change into their costumes and meet in the lobby.  That put everyone in a rush, especially since getting the keys took a long time (though it did give us a chance to wave at Jesse Jackson, who was just checking out).

Walt and I went to our room and discovered that the key card didn't work  The maid let us into our room, where we found someone else's luggage.  Walt also saw a plaque sitting on the dresser, which let us know that the room was occupied by James Foreman. We assumed he was late checking out but we didn't have time to speak with the hotel about it, so we stowed our luggage in the room of one group of the kids and we went to the lobby.

The hotel shuttle took us to Jax (otherwise I don't know that we would have gotten there on time).  The kids put on a great show, there on the banks of the Mississippi River. I admit to a warm feeling when I watched them doing Maple Leaf Rag and singing "...up and down the Mississippi..." while the selfsame river flowed past in the background. 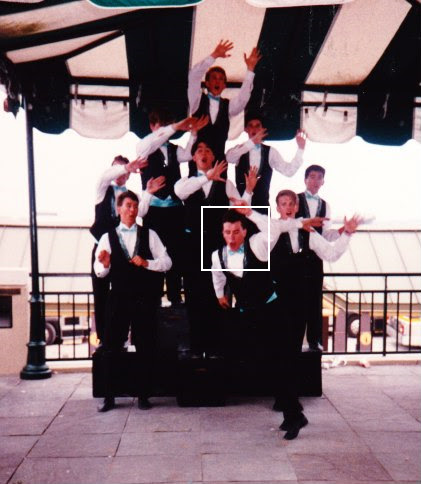 (David in the box)

This was followed by a river boat cruise on the Mississippi for all the groups competing in the festival the next day, with samplings of shrimp Creole, jambalaya, and red beans.  Dave's best friend, Jeff, found himself a girl and so had a date for the weekend.

There were several problems getting back to the hotel, but eventually we were all there safely, and Walt and I still did not have a room.  Mr. Foreman was still in "our" room and had decided to stay another night.  Additionally, other chaperones had problems with their room with not enough beds for their whole family and the hotel was full up. After much deliberation the hotel decided to send the family to another hotel for the night and put us in their room, leaving Mr. Foreman in his own room.  It wasn't an ideal situation, but at least it gave everyone a place to sleep for the night.

When we ran into Mr. Foreman at the elevator, Walt suggested to him that he should go and get into his bed to avoid being thrown out...he resisted the temptation to ask, "you remember how to go limp, don't you?" 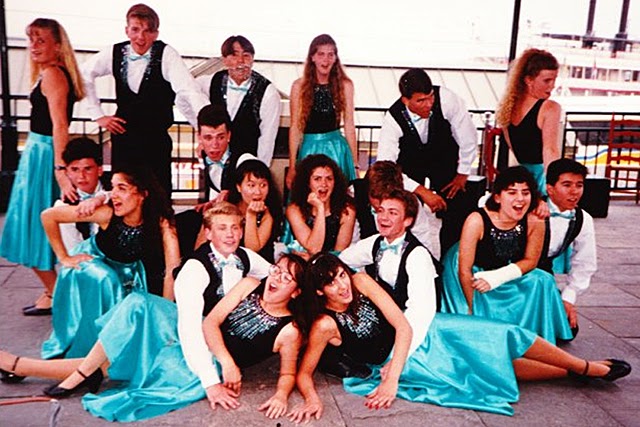