One Step Forward, Two Steps Back

I was cautiously slightly optimistic when Pope Francis made this statement about homosexuality in 2013:

When I meet a gay person, I have to distinguish between their being gay and being part of a lobby. If they accept the Lord and have goodwill, who am I to judge them? They shouldn't be marginalized. The tendency [to homosexuality] is not the problem ... they're our brothers.

This was a something new from the head of the Catholic Church.  And it was another little thing that I liked about this new pope.  I liked that he lived simply, not in the lap of luxury as previous popes.  I liked that he drove his own car to work.

I didn't like that he closed the door on the subject of women in the priesthood and wasn't sure yet whether divorced Catholics could receive the sacraments, but I tentatively began to look on this as a pope who was open minded and could, perhaps, in time, bring the church into the 21st century.

But then there was this, reported this week

Pope Francis has reportedly barred the nomination of a close aide of President Francois Hollande as new French ambassador to the Vatican because he is gay.

The apparent rejection calls into question the pope's reputation as holding more liberal views on homosexuality.

The French newspaper Le Journal du Dimanche quoted a "Vatican insider" as saying the decision was "taken by the pope himself."

So much for the progressive open-minded pontiff.

But as disappointing as this was, was the shocking interview I saw two days ago, and I'm linking the actual interview here so nobody can say I got it wrong, or was mistaken and didn't hear what I heard:
For those who don't want to take the time to watch the video, here is what it's about: 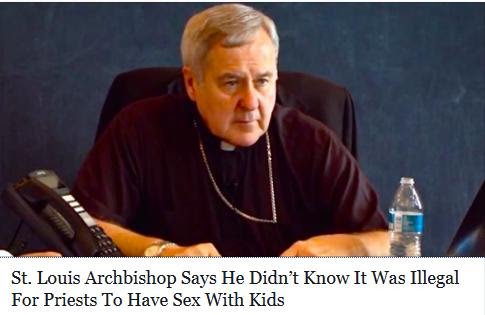 This Archbishop is asked not once, but TWICE if he knew it was illegal to have sex with children and he answers TWICE that at the time it was going on, he wasn't sure that it was illegal, but he understands that now.

This man is an ARCHIBISHOP, one of the pillars of the church.  A man with grey hair who never in his life, apparently, thought about whether it was illegal to have intercourse with a six year old (my example, not his).  This man is too stupid, not to say dangerous, to be one of the leaders of the Catholic church.

But is there any outcry from the Vatican, which won't recognize an ambassador simply because he is gay, but who apparently doesn't care if its hierarchy is ignorant on the issue of sex with kids?  Of course not.

I am so glad that I am no longer a member of this church.